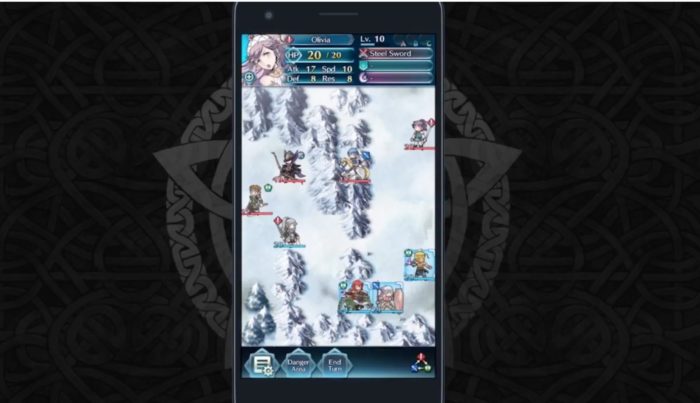 Fire Emblem Heroes takes place in the middle of a war between two rivaling kingdoms. The Emblian Empire wants to conquer all lands and the Askran Kingdom is mounting a resistance against them. Players will take on the role of a summoner in the Order of Heroes that can bring figures from all over the Fire Emblem worlds and timelines in order to protect the Kingdom of Askr. The summoning ability explains why heroes like Marth, Robin, Roy, and Takumi are battling it out on the field together.

Maps feature an 8X6 grid in order to fit on an average smartphone screen. Just like in other Fire Emblem games, players move their armies around the map for battles and to set up tactical advantages. You battle with the enemy’s army until the map is cleared. Just because this is a mobile game, it doesn’t mean that the game will be easy on you. The intensity of the battles will be on par with other entries in the series. The game will also have hand drawn art pieces and newly recorded voice lines that are expected in a Fire Emblem game. On top of that, attributes and the weapons triangle system that determines weapon advantages and disadvantages over others will also be included to please longtime fans and another layer of strategy to the game.

New to the Fire Emblem series is a new mechanic to summon allies. Heroes can be called into battle using Orbs. The more you summon heroes, the less orbs it takes to summon them. The heroes that will be summoned are random but the attributes they will have can be predetermined based on the color of the orbs. Orbs can be collected throughout the game and additional orbs can be purchased through the game.

Fire Emblem Heroes will be available for mobile devices on Feb. 2.