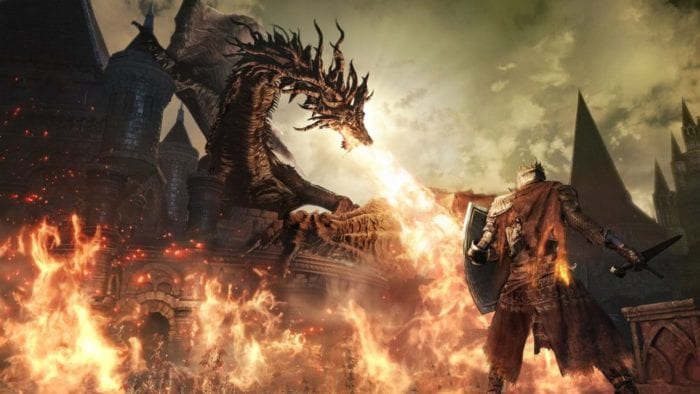 It’s award season here at Twinfinite! All week long, our editors and writers will be nominating games that stood out enough in 2016 to be a Game of the Year candidate. And later this week, we’ll reveal our winner! Today, reviews editor Zhiqing Wan tells us why Dark Souls III is worthy of being Twinfinite’s 2016 Game of the Year.

Dark Souls III feels like an apology for the sequel that came before it. Gone are the heavy-handed cutscenes that snicker at you at every turn, reminding you that this is a ‘hard’ game in which you will die many times over. Also gone is the questionable Soul Memory mechanic, and the head-scratching geographical layout of the game’s world.

In some areas, Dark Souls III also feels like a game that is capitalizing on an opportunity to right the wrongs that were made in the first game. For example, where Dark Souls’ Lost Izalith was a barren landscape decked out in lava and butt dinosaurs, Dark Souls III recreated the fiery labyrinth to depict what was perhaps From Software’s original vision for the land so steeped in Lordran’s macabre history.

The Souls series has never felt as magnificent and filled with so much bombast as Dark Souls III does. While the older games were often subdued – both in sound direction and visual presentation – Dark Souls III unleashes the beauty of its resplendent towers and ruins. From the Ashen One’s awakening in the cemetery, to their showdown with the series’ final boss, this is truly an epic fantasy journey that simply cannot be matched by any other role-playing game this year.

The bosses are, as usual, the game’s centerpiece, and they all feel wonderfully varied. Some are heavy hitters that will overwhelm you with speed and brute strength, others will harass you with magic, and some are gimmicks whose illusions of grandeur quickly fall away the moment you discover the one essential trick to taking them down.

While these one-off gimmick fights have often proved to be one of the series’ weakest points, they largely shine through in Dark Souls III, simply due to how logical the solution is. Some fights may feel overly simple, but they do make sense in the context of the game’s lore – a feat rarely seen and celebrated in the series. And of course, the soundtrack’s choir breathes life and a sense of dread into the encounters with the game’s champions. It makes the player’s moment of victory so much more satisfying and bittersweet whenever the music gradually fades to make way for the crackling pop of a bonfire springing to life near you. The ultimate victory fanfare.

Perhaps the most striking quality of the Souls series, which continues to live on in Dark Souls III, is its incredible tale and genius storytelling method. NPCs don’t drown you in mindless gossip about the Jarl of Whiterun or some other town, and you won’t find yourself picking up book after book of mindless drivel that add little to the historically rich world From Software has built here. Instead, the player has to actively seek out the story if they want it. Story and lore are buried deep in the item descriptions of every single tool you pick up, and every NPC encounter feels like you’ve stumbled across an oasis in the middle of a desert. These characters don’t waste their breath, and every word they speak has been carefully picked out to clue you into some part of the world’s history and lore.

Too many role-playing games these days are insistent on beating you over the head with all the incredibly deep and complex stories their creators have crafted. Players are often fed voluminous amounts of information, and everyone and everything you see is an exhausting sponge of facts, details, tidbits, and information on the locale you’re in. It’s a poor and overall stale way to tell a story, making the Souls series’ method feel so wonderfully refreshing.

Just as it has been in past games, every building, ruin, and object is deliberately placed in Dark Souls III. Nothing is there without meaning or purpose, and even the placement of enemies serves to flesh out some of the lore. What on earth would an Outrider knight be doing in the castle that leads into the Forbidden Woods? The gorgeous city of Irithyll where these knights belong is so far off, and the Woods are filled with nothing but mindless Hollows. There’s a short but tragic story to be uncovered here too.

Dark Souls III’s NPCs move with purpose. A character might be standing in one place when you first meet them, but they’ll quickly move on as soon as you progress past a certain point in the game. Dark Souls III’s auto-save system is notoriously aggressive, so if you attack a NPC, they’ll likely be your enemy forever. Reload the game, and you’ll still find them there, waiting and hostile. Perform seemingly innocuous actions, like picking up ashes and giving them to a handmaiden, and an NPC could decide to become a loyal ally. At the same time, kill an unsuspecting target, and you could earn the ire of another character later on down the line without knowing what exactly triggered it. The characters you meet feel independent and purposeful – yet another layer that adds life to Dark Souls III, and one we hardly see in modern role-playing games.

Piecing the big story puzzle together takes dedication and meticulousness on the player’s part, but the payoff is well worth it. Dark Souls tells one of the most compelling dark fantasy tales we’ve ever seen in video games, and Dark Souls III is the final entry that has learned from past mistakes, and serves as the climactic third act to close it out perfectly.

The truth is, the Souls series as a whole has simply dominated the action RPG genre since its inception. There’s no comparison, and hardly any competition. With unique bosses, a fantastic story, and its combat polished to a near-perfect shine, Dark Souls III is the best video game release of 2016.