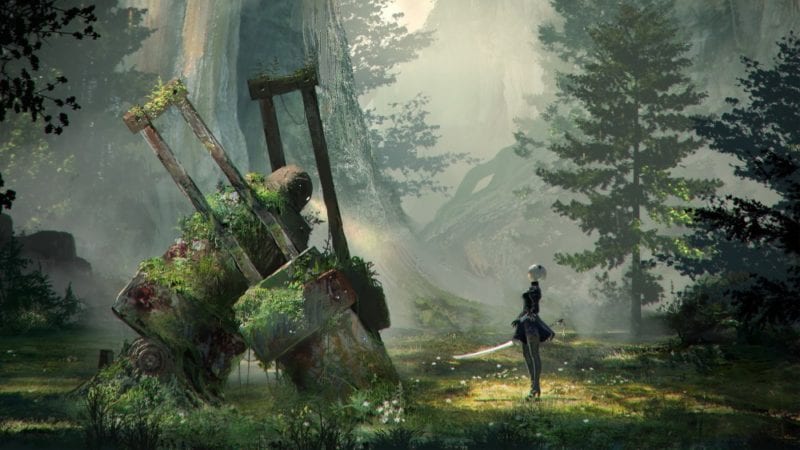 Right from the start, it’s clear that NieR: Automata seeks to remedy everything that went wrong in the original NIER. While NIER boasted a strong and emotional storyline to keep players hooked, there was far too much about it that just felt bland. The combat was simple and boring, and the environments looked dull, drab, and pretty same-ish wherever you looked. NIER flirted with a lot of bold ideas – the camera switches and bullet-hell segments quickly come to mind – but even while those largely paid off in a big way to help the game feel fresh and unpredictable, its plot and characters were pretty much the only things that kept it from being lost to the annals of time.

Joining forces with the powerhouse that is Platinum Games, director Yoko Taro and producer Yosuke Saito are primed to deliver an action RPG that will excel on two fronts: smooth and fluid combat, and a unique story that gets players invested.

Platinum’s involvement in NieR: Automata is obvious; combat feels silky smooth as the android 2B is able to swap between light and heavy weapons while attacking, and dart out of enemy reach with a snappy dash and glide. There is a robotic companion, called a Pod, that follows you around, and this seems to be Automata’s replacement for Grimoire Weiss from the first game. The Pod allows you to fire off bullets at enemies, and players can juggle between shooting a locked on target and executing melee combos on another nearby enemy. It’s a pretty sweet mix that keeps the action fast and flowing. The combat animation and the movements of 2B’s character model looked really nice and crisp. It’s hard not to feel like a badass while playing this game.

To prevent things from getting stale too quickly, Automata also sees the return of the awesome switches in camera angles. There were certain fighting locations in the latest demo that forced players to play the game as a 2D side-scroller, along with top-down, isometric angles that cleverly hid secret rooms away from players’ prying eyes. The switch to the static camera angles felt snappy, and entering each new location in the demo was exciting because you never knew what sort of encounters you were going to run into next.

Some of the robotic foes will also fire large red blobs at you. While the enemy bullets might feel a little dated due to how gaudy they look and how slowly they move, it does serve as a really nice throwback to NIER, where enemies and major bosses fired off similar bullets as well. Perhaps the highlight of the demo was its final boss, which was a gigantic structure with huge buzzsaws for arms. The boss fight was downright impressive, with the environment crumbling all around 2B as you try to dodge fatal swipes and slash at the boss whenever possible. NIER wasn’t shy about throwing in a few bombastic fights every now and then, and it looks like Automata wants to continue that trend.

That said, the most impressive feat about the whole thing had to be the frame rate, which didn’t drop once throughout that entire fight. While playing on the PS4 Pro, the game felt smooth, and the frame rate remained consistent during my time with the demo. Square Enix and Platinum Games have previously stated that they were aiming to hit 1080p and 60fps on the PS4, and it looks like they might just achieve that after all.

Because it’s an RPG, NieR: Automata also features a customization system for skills and abilities. These are accessed through chips made available for your android. In the demo, the only ability I had access to was Auto-Item, which lets 2B consume a recovery item automatically whenever her health dipped below 30%. There are other chips as well, but you’ll have to watch your android’s memory space, and clear some things out to make room for others. The chips also allow you to tinker with the game’s HUD, and you can choose how much or how little information you want on your screen. HP gauge, minimap, and damage counters can all be toggled on and off with the chips. After poking around in the settings menu, I also discovered that you can pretty much remap all of your controller buttons if you’d like.

Amidst all of its technical improvements, the demo build of the game also gave us a peek at some of the Taro-isms present in NieR: Automata. Normal difficulty is described as “probably” the most enjoyable mode for most of us, 2B and 9S have a nice rapport that vaguely reminded me of the more extreme connection Zero and Mikhail shared in Drakengard 3, and there’s an OS chip installed in 2B that will kill her and give you a Game Over screen if you choose to remove it. So why’s the OS chip there in the first place then, if you shouldn’t remove it all? Probably because Taro found it funny, and that’s just how he rolls.

Also, the soundtrack is a blast, which is pretty much expected whenever composer Keiichi Okabe of Drakengard fame is involved.

Automata even brings back the letterbox cutscenes.

If there are any complaints to be had, it’s that the mechanical enemies can get pretty predictable rather quickly. From all the previously released gameplay footage, there doesn’t seem to be a lot of variety in enemy types, which could potentially hurt the game and all its action combat fun. The camera also tends to feel a little floaty when you’re engaged in 3D combat, but that’s something you can quickly get used to.

Of course, there are still a lot of questions and mystery surrounding NieR: Automata. How long will the game be? How many dungeons or stages like the one we saw in the demo will there be, considering Automata is supposed to be a semi open world game with hubs? How would leveling up work, and when can we read more of those tragic weapon stories? We won’t know the answers till we’re closer to the game’s official launch in March, but for now, everything is looking really promising.

Even with all of its gameplay and graphical improvements, along with Automata’s obvious attempt to cater to a more mainstream audience, it still feels very much like NIER – a good sign for returning players looking to enjoy more of Yoko Taro’s craziness.