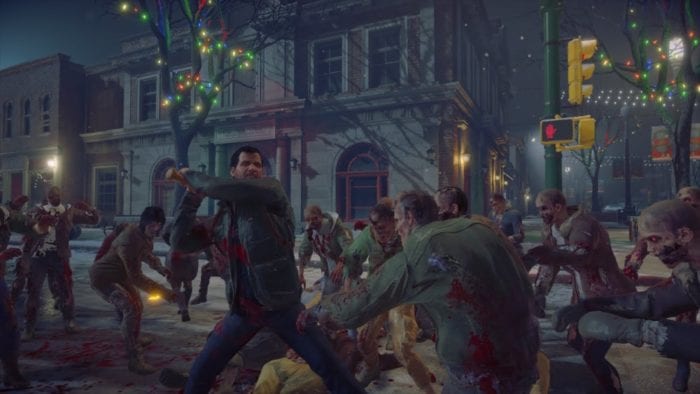 Dead Rising 4 is out in the wild and as fans are finding out, it changes up quite a few things about the series’ formula. One of biggest changes is the removal of the timer, which gave main objectives and side activities a time limit to complete. While not everyone enjoyed the feature, it did add a sense of urgency to every activity, and made multiple playthroughs necessary to complete everything. Dead Rising 4 has its own charm and quirkiness, but one thing it’s definitely lacking in is urgency. Ultimately, taking the timer out of the game may have been more detrimental than anything.

The opening segments of Dead Rising 4 are its strongest, introducing you to an older Frank West and his journalism student, Vick Chu. Then you get dropped smack dab into the middle of Willamette’s mall, just like the first game. The Willamette Memorial Megaplex Mall is a surprisingly nostalgic experience, as roaming around to different shops and searching for items is evocative of Frank West’s first adventure. The only problem is, you can do this for hours on end with no reason to move forward.

Once you make your way into the town of Willamette the same thing holds true. Dead Rising 4’s story is fairly well presented with cutscenes and dialogue, and there are definitely moments where things in the story seem urgent. However, most of the time the game has you traveling to areas of the town you haven’t previously been to, which means more shops and buildings to explore slowing you down in the process.

The biggest problem with all of this is that there’s a distinct lack of engaging objectives to do in Dead Rising 4, outside of the main story. Exploring buildings can be fun for a time, but there’s not much to find besides weapons and equipment. There are a good amount of collectibles to pick up that add some fun stories about the people of Willamette, but these are things you generally have to go into the menus  for in order to read through or listen to whatever recordings they provide.

In addition, you no longer have to escort survivors back to a saferoom, and there’s little to no story for survivors as well. They’re now random encounters that you run into across the world, and saving them raises the level of the nearest Emergency Center, letting you buy new equipment and supplies.

If you don’t save a survivor it’s not a big deal though, as another one will surely pop up if you wander around long enough. Health and recovery items are plentiful across Willamette too, and if you’re running low its easy to go on a hunt to grab some. All of these factors combine to make Dead Rising 4 an incredibly easy experience, and one that you most likely will get through without ever dying. It’s still fun to mow down huge hordes of zombies and find crazy new combination weapons, but things can get repetitive quickly.

Past Dead Rising games helped keep things fresh by providing players with main story missions, survivors to save, and psychopaths to fight. At almost all times you had multiple objectives from these options that you could complete, and if you were quick enough you could mop up a ton of them, even while exploring and finding new things.

Capcom Vancouver stated their reason for removing the timer in an interview with GamesMaster Magazine, “For our main campaign we really felt we wanted people to explore our world, and be able to go everywhere they want to go. We don’t want them to feel like they’re under the gun, to find what they need to find, or get where they need to get.”

Of course this design aspect may not have been for everyone, as some would much rather take their time and just do what they want in the world. However, the great thing about the old games was that you could play it whichever way you wanted. The game would keep going if you didn’t complete story objectives, and of course you wouldn’t see how each outbreak happened and how it resolves, but you could keep playing and exploring until the final day.

Dead Rising 4 feels too wandering at points, like there’s not enough to do and you can only mindlessly kill zombies for so long. The psycho battles have been rebranded as “Maniacs,” and no longer feature crazy cutscenes or musical themes, and there’s no rush to save any survivors across the city. Adding in a timer wouldn’t be the cure-all fix for the game’s problems, but it would encourage players to hit the story beats more quickly and keep things going.

There’s still a lot of fun to be had with Dead Rising 4 and Frank West is still a likable character, but the lack of urgency in its gameplay compared to past titles really does hurt it. There is some good news, however, as Capcom Vancouver plans to add a section in later that uses the timer. The bad news, it’s part of the $24.99 Season Pass.

The timer will be put to use in a new DLC Episode called Frank Rising, that sees Frank slowly turning into a zombie and trying to find a cure. It should be noted that this is a DLC add-on, and won’t necessarily add the timer to the main game. At this point we only know the DLC will be included in the Season Pass, and don’t know if it’ll release separately for a lower price. It’s at least good to see Capcom bringing the feature back in some way, but honestly it feels like something that should have never been removed.

Another idea altogether would have been to put an option in for players to turn the timer on and off. Ultimately, the removal of the feature just feels like something that’s a detriment to the game that many players will feel dissatisfied with. Considering it’s been a design staple for the Dead Rising series, it just seems baffling that Dead Rising 4 wouldn’t give players that option at the very least.