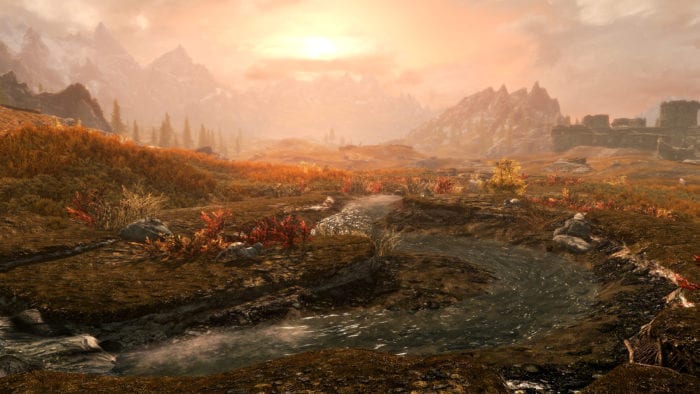 Markarth is one of the oldest settlements in Skyrim. I first entered the stony city five years ago, only to find it descending into corruption. A corruption I never cleansed, because the city’s quest was so broken in my original Skyrim run that I was forced to simply shrug my shoulders at its poor NPCs, as suffering as they were bugged. The city of Markarth was my first target in Skyrim: Special Edition, as my adventure kicked off on a note of redemption.

Markarth finally freed, I sheathed two bloody daggers and emerged from my tunnel-vision vengeance to the familiar independence that is Skyrim’s masterful open world. Hundreds of quests to follow, story paths to uncover, and ways to play through the spread of skill trees, ranging from illusionist mage to two-handed warrior. Even more pockets to pick, baskets to accidentally pick up, and reasons to jump back into Bethesda’s gripping RPG.

This feeling eclipses the visual wonder of Skyrim: Special Edition’s upgraded graphics. The changes are noticeable – lines are crisper, god ray lighting pours through bundles of tree leaves, and dynamic depth of field makes staring at a mossy tree somehow entrancing. Colors glow with a new vibrancy, and nearly as much time as I spent rummaging through my piling quest log, I spent pausing at the sight of a gorgeous vista that unfurled over a hill or with just the right amount of twilight sun. 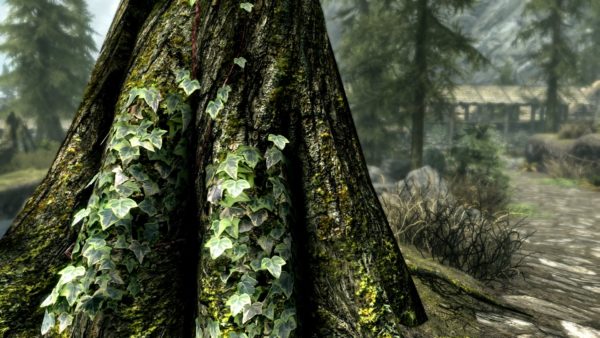 The reliced models and polygons haven’t gone anywhere, though, so there’s no reason to walk in expecting a visual revolution that’s rebuilt this 2011 title into a modern day affair. The improvements won’t come in a jaw-dropping explosion, but they will come in the background scenery of a conversation, or on the glow of moonlit fog on your path, and in those moments of pause.

On the flip side, you’ll spend less time pausing during load times, which have been noticeably shortened, or during heartbreaking bugs (be free at last, Markarth). Throughout many hours of Draugr massacring I only encountered a couple of glitches. An NPC just stone stared and moonwalked away from me after losing a brawl, and two separate quest-givers beckoned me to follow them, but only managed to take three or so steps between frequent stops to stare into the void. I was happy to see no crashes, freezes, or broken quests, and save for a few moments of NPCs seemingly having deep visions into space, no other issues plagued my time. 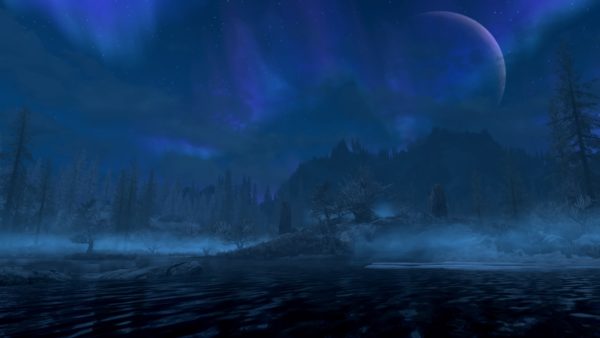 Modding is the most novel feature added into the mix, a laughable statement maybe to PC modders but a veritable magic carpet ride for console players. You’re always a simple in-game menu and a quick download away from enjoying the Skyrim community’s long-cultivated passion. Mod installation works smoothly and intuitively, and any mod, even if it just adds five beehives, clones your original save file into a trophy-disabled one. If you’d like to continue earning trophies, you can switch back to your “untainted” file and play through.

Due to Sony’s restrictions on external assets and a 1GB limit, however, mod pickings on the PlayStation 4 felt disappointingly thin. God weapons and immortal livestock will definitely bring some of modding’s quirks into the picture, but there was nothing akin to the madness we’ve seen on PC, nor some of the most lauded fan creations.

Most of the PlayStation’s mods come in the form of alterations. Options include infinite shouts, disabled fast travel, and — hallelujah — weightless Dragon Bones. They can make soul gems and scrolls craftable, disable music in sacred temples, or add a Salmon Shack. But some of the most all-time popular Skyrim mods include those for revamped character models, new armor and weapons, deep quests, and entirely new locations. PS4 mods don’t, at least for now, offer this. And they can’t do this, in case you want this: 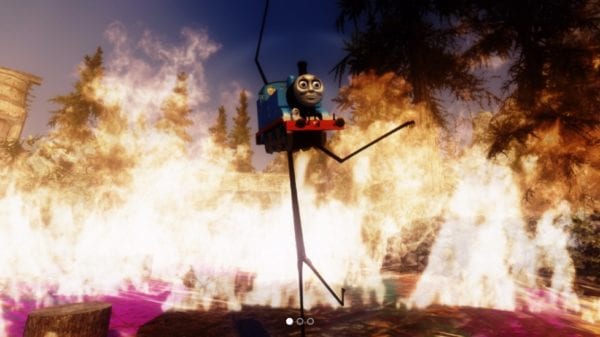 There are already some attempts to make do with Sony’s restrictions, such as Chesko’s crafty Rain and Snow FX mod, which uses invisible spell effects to mimic dripping water and frost effects. On the other hand, we have Rain and Snow FX because Chesko’s famous Frostfall mod and its custom art can’t make a full appearance by these rules. Down the line, we’ll likely see a decent stretching of the modding imagination that cobbles in-game assets to creative success, but those expecting the unreigned freedom of PC modding will feel the feature neutered on PlayStation. The Sony silver lining, if you’re picking up the PlayStation Pro, is that this remaster will receive native 4K support on that platform, which ought to amp up the lighting and contrast effects further.

At the end of the day, though, I’m there for the quest log. I’m reveling most at the opportunity to again live the life of a wandering rogue, stumbling across caves of treasure and taking over with concerning speed every guild, brotherhood, and organization I happen to join. With some updates, these moments return on my PlayStation 4 at about the level of visual quality they’d all adopted in my nostalgic mind. 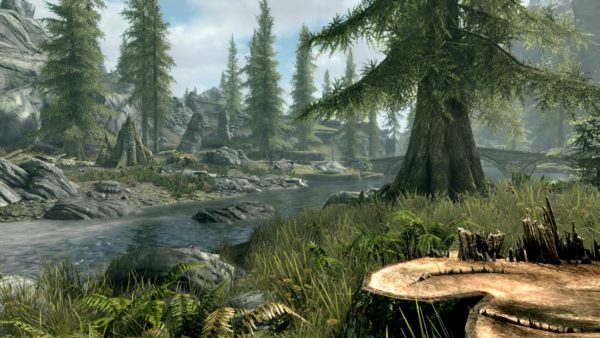 That’s about as base an explanation as there is for this remaster: it brings Skyrim back. A fresh coat of paint and some variable mod support – even a bundle including all of the successful DLC so far – won’t satisfy if you’re not looking to jump back into that world for what it was. Look forward to this entry if you look forward to fire blasting your way through more trolls, sneaking through another abandoned ruin, and choosing yet another life in a grand world jammed with more quests than 100 hours could afford you. Those ready to hang up their horned helmets won’t find significantly new experiences beyond modding. Anyone who has been modding the game with vast changes and heftier graphical overhauls on the PC will be especially underwhelmed, but will also receive the remaster for free if they owned the title and its DLC already. And if you’ve never played The Elder Scrolls V: Skyrim and don’t have a healthy aversion to adventure, it’s an unquestionable must-buy. In other words, remasters are difficult to score.

This Special Edition is nothing less and little more than Skyrim. That is either exceptionally exciting or a respectable pass, depending on how much Dhovakiin thirst the last five years has left you with. I certainly have enjoyed retreading these paths for the dozenth time. Though an inch of fatigue and diminished mod offerings weigh on me, this is a Skyrim more accessible, more colorful, and equally as lovable as the one I’ve known.