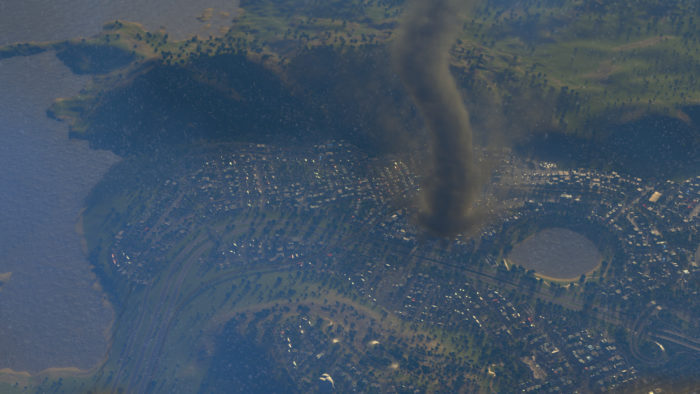 Cities: Skylines released to critical acclaim during a time when players were itching for the SimCity days of yore. However, longtime city building fans might have felt the ability to cause some destruction was missing from the base game. Indeed, our god complexes weren’t quite satiated until now. Natural Disasters, the latest Cities: Skylines’ latest expansion, gives players the ability to plan for incoming disasters, as well as cause them.

It’s clear that Natural Disasters is made with challenge in mind, and very much so an expansion that fans have been waiting for since day one. Is everything going peachy for you? Well, a tornado could swoop right through and ruin a ton of locations within your city. The destruction left behind each of these disasters ensures that it’s not something you can take lightly, and though there are preventative measures you can take, each event will be pretty devastating. Not only that, but the scenarios added in aren’t so simple to complete and will take up quite a bit of your time. (Thus ensuring you also won’t get the unlockable Unique Buildings too easily, either.)

Natural Disasters is all about breathing more life into Cities: Skylines, and after Snowfall and After Dark, it’s much more welcome. A clear sign, really, that Colossal Order understands players at this point are looking for more ways to engage with the game. It’s lasted for more than a year for many of us, but each expansion that introduces some truly new features and helps increase its longevity is good in our book.

Could there have been more added, though? Absolutely. While there are disasters that increase difficulty and give some neat new things to do, if you’re not actively dealing with them, you are genuinely feeling like you’re just playing the base game. It’s only sometimes that this expansion will clearly come into play. During my unique Natural Disasters scenario playthrough, for example, I maybe dealt with three tornadoes and a sinkhole in the span of about 15 hours. The rest of my time, it honestly felt like no expansion was installed, that I was building all of the preparation buildings for nothing in particular.

All in all, if you’re a big fan of Cities: Skylines, this expansion is one you should at least have on your radar. It increases the difficulty, introduces some pretty long, unique scenarios, and lets you feel like a malevolent god with the ability to just drop a meteor right on the city center, if you wanted to.