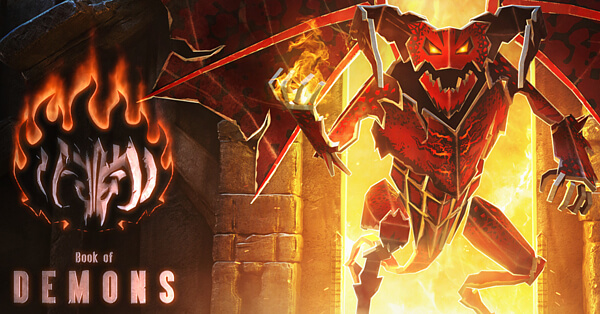 Book of Demons on PC

I never know quite how to judge a game that’s not yet complete. Book of Demons, an early access adventure RPG, is no different. The stylish “pop up book” aesthetic and simple gameplay form a pretty unique combination that’s both easy to jump into and challenging to take on. With this being an early access title, it’s pretty easy to give it some breathing room, but the potential that it’s showing in this stage is pretty clear after my time with it.

Book of Demons puts players in the role of your typical adventurer. To begin, you’ll only have the Warrior class available, so that’s what my time was spent with. The game uses a mix of traditional hack-and-slash click mania and an intriguing card system for its core mechanics pieces. The game’s dungeons are randomly-generated and built with a series of paths to explore while searching for loot and taking down the evil creatures dwelling within.

In one of the more unique gameplay choices, Book of Demons operates a lot on things happening automatically. While players choose the direction their hero travels in, walking the path is continuous until you encounter a crossroads or a fight. Attacking, too, happens automatically, though players can click on creatures to attack as well. Certain enemies will have protective shields or cast spells that must be clicked to be dispelled, adding some need for attentive play.

The game’s card system also stands out, and Book of Demons offers plenty of variety in what’s available. Skills, weapons, armor, and items are all represented by these cards, and you’re only able to equip a certain number. Worn items require a permanent sacrifice of mana while in use, so choosing your cards wisely has huge implications; will you stock up on passive bonuses by dedicating yourself to these artifacts, or keep your pool free to use on high-damage abilities?

Above all, Book of Demons presents an impressively creative look and feel that permeates every piece. Whether in town talking to the locals or delving deep into the darkness below, the distinctive pop-up style is consistent and cool. It gives the game a bit of a cartoonish appearance, and serves to create an interesting atmosphere that blends well with the game’s steady difficulty and rising challenges as players dive deeper into its dungeon.

While the game is still a little rough around the edges, and I ran into a couple of game-crashing moments, it’s pretty safe to say that Book of Demons is shaping up to be something special. The folks at Thing Trunk have been active in listening to user feedback and changing things up, with plenty of consistent updates rolling out as release draws near. Interested players can check out more or get in on the early access train at the game’s Steam page.