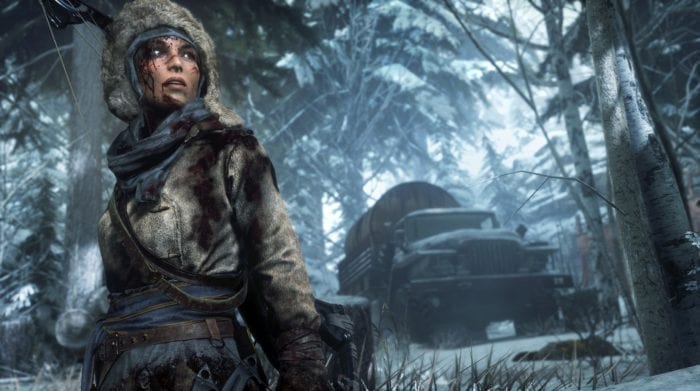 During New York City Comic Con, Twinfinite had a chance to check out Rise of the Tomb Raider on the PS4 – complete with the Croft Manor VR experience – and see the game running on a PS4 Pro. After that we took some time to sit down with Crystal Dynamics’ Senior Community Manager Meagan Marie to discuss Tomb Raider’s journey to PS4, the team’s experience working with Microsoft, and the future of Lara Croft.

Twinfinite: So I have a few questions because, as you know, Rise of the Tomb Raider is finally coming to the PS4 after almost a year wait, and it’s seeming after I got to try it out that it’s worth the wait.

Now that it’s coming out, it’s coinciding with the 20 year anniversary. Was that always the plan? Was that like a timing the developers always had in their mind, or did it just happen to play out that way?

It kinda happened to play out that way when we knew that we would be releasing the PS4 version this year and it was the 20 year anniversary. It seemed like a really awesome opportunity to make this a huge release and to add a bunch of new content and so on and so forth, so that’s what we did. We added Croft Manor and the VR and all that, and it was something that, as a team, we were very excited about.

So initially, the plan was just to bring a sort of GOTY edition, but then the “stars alligned,” and it was like, let’s do it up?

Well, we knew that it would be the 20 year anniversary this year, and then it’s really when we found that we had the time and resources to do something really amazing. And that’s partially because we partnered with Nixxes, which is a long time partner of ours. They do a lot of ports to different platforms and we’ve worked with them for over a decade. So they helped us a lot with bringing Croft Manor to fruition in such a short period of time, because the conversation really started after the PC launch earlier this year.

So it’s only been a few months and they’ve managed to actually get all of that done.

We launched the PC version in January, so after that we were like, “okay, PS4, how can we make this something incredible?” And we had all of these meetings, throwing around ideas, and Croft Manor was really the right one.

When the team suddenly realized, “you know what, we have to do it big. It’s the 20th anniversary, it’s PS4. Let’s make all the fans happy,” did that deter them from maybe an initial plan? Was anything scrapped to make this new plan or were ideas just added on?

No, it was all added. I mean, we knew that we were… that we obviously wanted to include all of the Season Pass content and all of the past outfits and things that had already been released, but it was really just additive. The 20 year anniversary celebration just marked this perfect opportunity to do something very nostalgic, and that’s why we have things like the retro skins that we’ve included and re-imagining the Tomb Raider III outfit for Antarctica for Reboot Lara. So we have all of these things in there that are very nostalgic, but they make sense and fit into the new reboot universe. 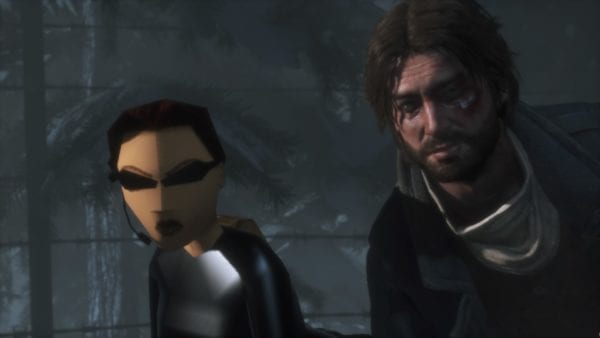 Well I think one of the big challenges was learning the ropes around VR. So VR, this is a first-time opportunity as a studio that we’ve ever done VR, and obviously any time you embrace new technology like that, it’s a challenge. So one of those challenges was ensuring that it was a very comfortable experience for both people who are acclimated and accustomed to VR, and then also people who are very new to VR.

So we have two play modes: the free mode, which is essentially that you push forward on the sticks and go, and that is for people who don’t have any sensitivity to motion sickness and are very acclimated to VR. And then we also have the comfort mode which is for people like me, because I get incredibly motion sick very easily and I’m absolutely fine playing it. It’s essentially that you take Lara and it warps her to locations in the environment so that you can still move and explore what’s in the space and environment physically, you can kind of move around and, you know, sit down and so on. But it gets rid of that sort of disassociation with your brain and your body.

I actually wanted to ask about that. I’ve played a lot of different VR games on multiple headsets and, normally, teleporting is horrible, I’m just going to be completely honest. But here it works really well.

That’s from lots of testing.

I didn’t get any dizziness or anything. Was that something they new beforehand going in, “people hate teleporting, how can we make this great?” Because I was playing it, and normally it’s disorienting because you don’t have control of where you’re viewing, and I was wondering how is this going to work.

It’s interesting because we just had the free mode at first and it was only through testing in the studio with some very brave people, who continued to test, that we realized that we needed a second mode. So when the second mode (comfort mode) was added in, it was just testing and testing, and we did a lot of it internally and we have a lot of surveys we’d fill out every five minutes. “How do you feel? How does this work? Etc.” and so it was just iterating and adjusting to the sensitivity and the camera turns and all that kind of stuff, making sure it felt really good, and I think the team did a great job with that.

Does that mean it’s getting like the full package? The whole shebang, 4K, HDR, better load time, everything?

So we have only announced a couple of details about the PS4 Pro, and for now we’re just leaving it at that because we’re going to do a more in-depth announcement later. But obviously it will support 4K.

We have three viewing modes that we’ve announced and that we’re able to talk about. So we’re gonna have, on the PS4 Pro, we’re gonna have the 4K mode which has a locked 30 framerate, an unlocked framerate mode which will be 1080p, and then we’ll have an enriched visual mode which is 1080p locked at 30, but basically it turns on all of these advanced rendering techniques that make the world look really beautiful.

So you have options depending on if you have a 4K display, so you can have more power, or if you want a more fluid framerate and so on. That’s something that has been pretty well received and we’re pretty excited about that. You know, it’s literally just sliders, so you can change it at any point in time depending on how you want to play. 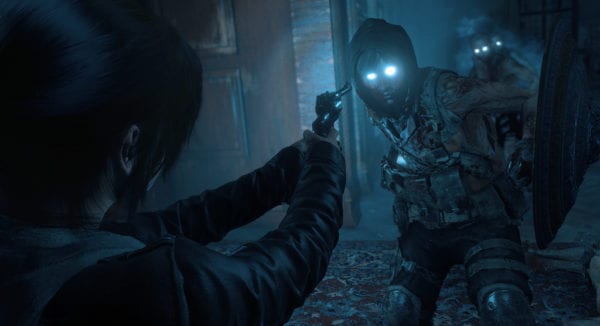 When the game was first revealed everybody was excited. Then it was announced exclusive and people were a little less excited.

That’s definitely a tough question to answer. Um… I’m trying to figure out how to formulate this best. Obviously when we set out to make Rise of the Tomb Raider and we partnered with Microsoft, who had been a very good partner in the past handful of titles, we set out to make the very best version of the game that we possibly could, and platform exclusivity allows for that because you can work with a single focus. You can work with the people who literally make the hardware and be like, “we’re having this problem, how do we do this?” And they tell you.

So we had all these great liaisons at Xbox and they provided a ton of reach in terms of putting us next to Marcus Fenix and Master Chief and so on, and helping us showcase the game around the world. Ultimately, we do feel that we’ve made the best Tomb Raider game we’ve ever made, and so that’s something we’re very happy with, the reception of that. But obviously, you know, that the PS4 fans have been waiting for a long time, and something with the 20 Year Celebration was making sure we knew that they felt like it was worth the wait. And that’s one of the reasons we threw so many resources behind making the content, adding so much value to the content so that it feels like a new release.

Speaking of Croft Manor, which looks amazing, you said that Nixxes helped you a lot. Were there different locations and then it just clicked like, “what are we thinking, it has to be Croft Manor”?

I mean, we looked at a lot of different options in terms of what kind of content we could add, but I think Croft Manor was pretty much the one right away that we were like… because we had teased it in cutscenes. Croft Manor was present in cutscenes in Rise, and so making it playable – kinda having that tease in the main game but not having it playable was something that we wanted to, you know, rectify. We wanted to be able to have people explore Croft Manor, so that was pretty early on. Right up until launch we were adding easter eggs and adding more stuff because it’s just… we packed it with so much nostalgic content. There are so many layers in there and things that, if they’re classic fans, if they’re hardcore classic fans, things they’re gonna recognize as easter eggs and so on, so we landed on the idea early and we kept pushing it right until the end.

So to close, can we expect even more from Lara Croft?

Oooof course (laughs). I mean, we have no specific plans for right now because, yeah, we just need to make it through this launch and everyone’s working really hard on that. But I’d like to point out that this is the 20 year anniversary of the Tomb Raider franchise, right? And in the late 90s, they had just announced the Top Cow comic series, and they had just announced the movies and started filming the movies, and there was a handful of successful games under the developer’s belts.

Now it’s 2016 and we just released the new comic series by Dark Horse and they just announced Alicia Vikander as the new Lara and all of this, so it’s really cool. And, you know, the reboot was the highest selling game in the franchise history, so it feels like 20 years later that the franchise is doing exceptionally well. And it’s a wonderful feeling, especially for someone like me who loves the character so much and I want the best for her and the franchise. So I don’t think she’s going anywhere.

So no slowing down anytime soon?

No slowing down, especially since we have the two brands, too. The Lara Croft brand and the Tomb Raider brand. We’ve got Relic Run, and Lara Croft GO, and we have this really fun nostalgic playground. Then we have the reboot universe, so there’s a lot out there for Lara to be put in.

It’s looking like Lara Croft is here to stay. After a tumultuous period of the heroine finding herself in the current age of gaming, the Tomb Raider franchise seems to be standing tall as a classic icon in a sea of new games. The latest release, Rise of the Tomb Raider, is available now on PlayStation 4, Xbox One, and PC.