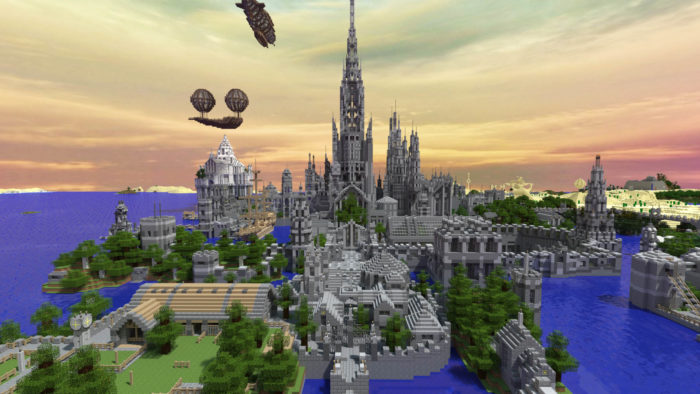 Minecraft players have unveiled some stunning builds over the years including a detailed space shuttle and a recreation of the futuristic city in Mirror’s Edge. The latest addition to the collection of beautiful Minecraft builds comes after one player dedicated five years to creating a stunning castle with four distinct sides and tons of intricate details.

What he describes as a lavish castle is truly an entire kingdom complete with residential sectors, large boats, multiple aircrafts and so much more.

Every glimpse of the castle reveals more details and more reasons why the build took so long to complete.

“One of the things I really wanted to achieve was a depth to everything, such that you only ever saw the tip of the iceberg in terms of what was there,” he explained. “Almost every structure is somehow connected underneath with subterranean passageways, if you’re lucky enough to be able to find your way there, that is.”

Even without seeing the complexities that lie underneath the castle, the structure above ground is beyond impressive.

The castle is composed of four “sides” that act more like regions that mere sides of structure.

The Fortress Side is described as “the most ‘generic’ side – a castle with ramparts and towers, a moat, and walls.” Other features of this side include a gatehouse and outlying towers along with a lengthy bridge that would lead visitors to the castle’s grand entrance.

The Residence Side is complete with balconies and lavish living areas while the Factory Side houses “chimneys and viaducts providing water and lava” to the castle.

Lastly, the Town Side plays host to a series of shops, noble residences and even a lighthouse near the docks.

What is perhaps the most captivating thing about the build is the sheer amount of detail. Despite how massive the build is, it’s clear that danrharvey took the time to analyze every inch of his growing kingdom.

Unfortunately, not every day of those five years was spent expanding the castle and fine tuning the details.

A major hiccup during creation snatched several months of work away from danrharvey.

“It was fairly aimless at first, I just started building a castle, with tunnels beneath, then about three or four months in, during an electrical storm my computer crashed and the save game corrupted,” he explained. “Disheartened, I stepped away from the game for a while, but it began to stew in my mind to start a new build, but it had to be big and cool.”

That’s when his dreams of a sprawling castle came to life.

Since sharing the images, users have flooded the post with requests that danrharvey upload his “crazy awesome build” so other players can explore his newly created masterpiece.