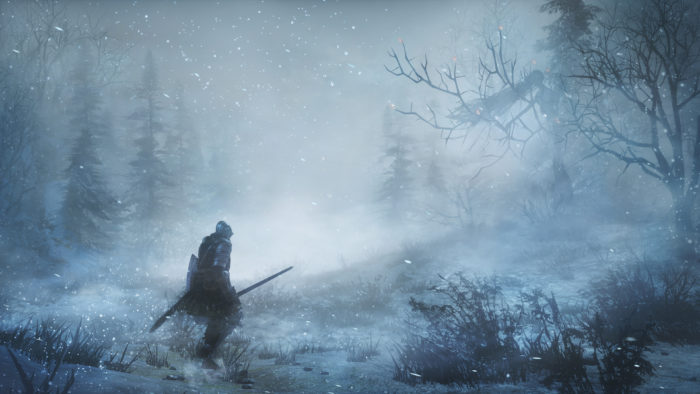 The Dark Souls games have always had some of the best DLC of any modern franchise, with expansions such as Crown of the Ivory King and Bloodborne’s Old Hunters offering the best in recent memory. Much of what makes this content so fantastic is that it not only gives players more Dark Souls to play, but builds upon the mechanical foundation in interesting ways. Aiming to continue this trend, Dark Souls III’s first expansion, Ashes of Ariandel, aims to deliver new encounters while setting it in a rather familiar setting. Even though this DLC emerges with a few wounds, it still offers up an entertaining if not short experience.

Set in the Painted World of Ariandel, players are sent out to reignite the fire and burn the rot that has infested Ariandel’s world. In true Dark Souls fashion there are just enough bread crumbs for players to follow so they have a general idea of what has happened. It’s only when you talk with NPCs, explore hidden areas, and read item descriptions that the depth of this story begins to form. The problem is that Ashes of Ariandel’s story has some genuinely interesting moments, but the expansion just never offers enough time to fully flesh out these ideas. This can be especially troublesome for those who aren’t familiar with the Painted World’s first appearance in the original Dark Souls.

In fact, the entire expansion was surprisingly short and my play time clocked in at around 4 hours with me scouring every nook and cranny for items and lore. There are no NPC side quests and Ashes of Ariandel only offers two bosses, one of which is optional and can be overlooked quite easily. This is a shame since the Painted World offers some truly interesting possibilities, especially when you begin to interact with some of the side characters scattered about this snow blasted landscape. Though the change from gothic cathedrals and foreboding woods is a nice change of pace for Dark Souls III.

Traversing through a blizzard with your visibility hampered makes for some tense moments, only coupled by dangerous environmental hazards such as snow banks breaking underneath your feet. You’ll come across a variety of snowy areas such as a large wooded forest, precarious cliff faces, and even a decrepit settlement that takes inspiration from the Undead Village. It works within the context of the story, though if you’re not a fan of the snow aesthetic then you will grow bored with Ashes of Ariandel quite quickly.

Thankfully, there’s enough variation in enemies to keep your journey interesting, as this expansion offers new foes along with twists on older ones. Wolves will now howl to call in reinforcements, giant towering Vikings attack with a mix of magic and brute strength, while large flies swarm you in large numbers. They offer a solid challenge to both newcomers and experienced veterans, which can extend the shelf life of this DLC. It’s also nice that From Software hasn’t tailored any of these encounters to favor one playstyle over another, allowing players to experiment with new and different builds.

This also translates into the new armor, spells, and weapons you will find, which both compliment the expansion and Dark Souls III as a whole. From Software has included some interesting weapons such as the ground shattering Earth Seeker and the speedy Crow Quills. Even though spells aren’t nearly as plentiful, ones like Snap Freeze and Way of White Corona are certainly great for any mage’s arsenal. Most of the new weapons feel quite unique and could inspire entire builds around them, especially when it comes to the PvP side of Dark Souls III.

Speaking of, the competitive aspect of Dark Souls III has gotten a surprising amount of love in this expansion as it not only added matchmaking but actual game modes. Players can now compete in a variety of PvP modes such as 6 man free-for-alls, traditional duels, or large 3 vs. 3 team fights. Even though there is only one arena currently to fight in, From Software’s choice to streamline this section of the game is a very welcome addition, even if they haven’t made setting up “Fight Clubs” an official part of the game.

However, the biggest point of contention with Ashes of Ariandel has to be the bosses, or lack of this time around. Only adding two new fights, and they are quite inconsistent with both quality and design. The optional boss is really nothing special and doesn’t offer a ton of challenge, while the final boss is possibly one of the best in the entire series. While we won’t spoil the who or what it is you’re fighting, the momentum and pacing of this final boss battle is expertly crafted. It also helps that this is clearly a small homage to one of their most famous boss battles from the original game.

Yet the optional boss feels like less of a challenge and more of a concept that sounded cool on paper but failed in execution. This becomes especially noticeable since both boss fights in Ashes of Ariandel share a rather similar structure in how they progress. It’s also a shame that we are only given two bosses to fight, especially since the Painted World offers so much variety in terms of both settings and enemy types.

Dark Souls III: Ashes of Ariandel is possibly the weakest of all the Souls-Borne expansions, but that doesn’t mean it’s bad. While it doesn’t reach the near perfection of those before it, there is enough variety and good ideas here to support a playthrough. Even though this DLC is on the shorter side and has a glaring omission of boss encounters, the excellent PvP additions, loot, and a superb final boss make it a journey worth taking. Just make sure to bring a jacket and a torch if you plan on venturing into this cold world.