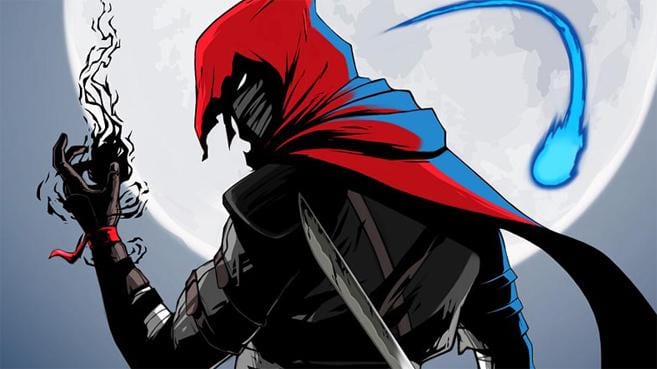 In Aragami, you play as the titular vengeful spirit, who is summoned by a girl named Yamiko to liberate the occupied city fortress of Kyuryu. It should go without saying that Aragami’s setting takes some obvious cues from feudal Japan, from the cherry blossom petals swirling past traditional torii gates to the dead silent ninja you embody. That rustic beauty is perfectly complemented by a cel-shaded art direction that removes all clutter from the environment, lending Aragami a sleek visual elegance that makes it look like a painting in motion.

As a dark spiritual entity, you have some intriguing abilities at your disposal that masterfully embrace the very core of any stealth game, namely sticking to the shadows. Most of these so-called Shadow Abilities require Shadow Essence to use, which refills when you’re hiding out in the shadows, and drains by logically using said Abilities or exposing yourself to bright lights for too long. Some of the game’s more powerful Abilities, however, require charges that can be refilled at Shrines.

Shadow Abilities come in both offensive and defensive varieties. Some are unlocked as you progress through Aragami’s chapters, like a set of bells that can be used to lure guards towards your position, whereas the majority of said Abilities are unlocked by spending Skill Points that can be obtained by collecting Scrolls scattered throughout its 13 levels.

This option to choose what Abilities you get and which ones you let alone for the time being allows you to craft and enhance your own play style, with abilities ranging from vicious dragons that drag Kaiho forces into obscurity and black holes that swallow those who venture too close, to granting you temporary invisibility or letting you dispose of corpses by engulfing them in shadows.

While I personally preferred relying on my trusted sword to silently take out the opposition up close only to make their bodies vanish immediately after, every now and then I resorted to the occasional black hole or tossing a Kunai dagger into the heart of a distant enemy. Changing up my approach was either done when the opportunity to do so enticingly presented itself, or simply because using these Abilities lets loose your inner ninja badass.

The main ability you’ll use, however, is the Shadow Leap Ability, which is reminiscent to the Blink ability you have at your disposal in Dishonored. This lets you teleport from one shadow to another, allowing you to traverse the world unseen and at a rapid pace. Using Shadow Leap is one of the first things Aragami teaches you, and in theory, it’s perfectly possible to beat the entire game Leaping from shadow to shadow without ever taking a soldier’s life or being detected, and the game naturally rewards you for playing a certain way, too.

At the end of each chapter, you’re scored and granted up to three medals: a Yurei medal that’s awarded for remaining undetected, an Oni medal given for taking out every enemy in the level, or the Kami medal that rewards those who didn’t harm a soul. Seeing how two of these medals are exact opposites of each other, Aragami encourages you to replay its chapters, which is something I unexpectedly loved doing. Killing every Kaiho guard can become a tricky stealth puzzle, forcing you to make full use of the Abilities at your disposal as well as relying on your general stealth skills, whereas making it through a level unseen can prove to be equally challenging. Going from one extreme to the other truly makes the gameplay freedom in Aragami shine, although it’s quite likely that you’ll either play through a level killing everybody or nobody altogether, just to claim one of the two medals reliant on the amount of kills you do or do not score.

Thanks to its incredibly fluid stealth controls, playing Aragami the way you like is nothing short of a joy, which on its own terms will encourage you to experiment with different Shadow Ability combinations or switch up your general approach. I may take out a guard by Shadow Leaping behind him, finishing him off with a swift stab through the heart, whereas someone else might finish the job from afar with the toss of a Kunai dagger, or even evade the bloodshed altogether. I’ve tried a ton of variations, ranging from a complete ghost playthrough to an all-out murder spree, and I found every possible combination in between to be satisfying and rewarding in its own way.

The gameplay feels fast and responsive, never forcing you to slow down or speed up but rather encouraging you to tackle any given situation the way you like to play through it. That excellent pacing is a necessity if you wish to beat the game, too, because all it takes to reset your progress to the latest checkpoint is but one direct blow. Time your Leap wrong, leave a corpse exposed in a frequently patrolled place, or get caught red-handed with your blade through a soldier’s heart, and you’re almost guaranteed to take the express route back to the latest checkpoint.

Resorting to action isn’t a viable option in Aragami, which is a welcome punishment for someone who loves hardcore stealth games. Most titles these days tackle stealth as but one of many approaches, making it a possibility instead of a necessity, but that ship won’t sail here. Luckily, restarting a checkpoint happens in the blink of an eye, quickly allowing you to jump back into the fray and adjust your tactics where needed.

Whenever I failed in Aragami, it was most definitely because of my own mistakes, and not particularly thanks to clever enemy AI. In fact, the Kaiho militia can easily be described as nearly brain dead, sticking to predetermined patrol patterns they only temporarily venture off of to either investigate a corpse, check out a noise, or closely examine a spot where they briefly saw you crawling across the darkness. When a guard walks straight past you to investigate your last known position, it’s hard not to chuckle and shake your head. Still, these moments are few and far between, and most of the time, guards are either dead or well behind you before you can even notice their idiotic behavior.

One slightly frustrating aspect, however, is that the camera controls can every now and then get a bit wonky in Aragami. Unlike most games, Aragami is played over the titular anti-hero’s left shoulder, since his cape cleverly serves as the game’s only heads-up display found at the bottom right corner without unnecessarily covering up the gorgeous vistas. When you’ve planned out the perfect route to take only to come to the conclusion that the camera angle simply won’t cooperate, having you Leap to another bit of shade you didn’t intend to, can involuntarily cause you to make your presence known. That’s an issue I only came across once or twice, however, so it’s not crippling to the overall experience in the slightest.

Altogether, its daft enemy AI and some wonky camera controls can’t bring down this phenomenal stealth experience. Aragami is pure eye candy with its feudal Japan-inspired visual style, which perfectly complements its unique and engaging shadow concept. There’s a ton of Abilities at your disposal to play around with, and its fluid controls allow you to effortlessly switch between its enjoyable play styles. With so many stealth games shrugging off the concept when things heat up, it’s nice to come across a game that rewards cunning sneaking whilst punishing the reckless mistakes you make. This one is a definite must for true fans of the genre.