It’s an odd proposition: take a beloved series with a legion of adoring fans, and strip out the gameplay people admire, then re-purpose it as a turn-based puzzle box. It’s certainly odd, but as Square Enix has dutifully proven, it’s one that works. Its Go series –Hitman Go, Lara Croft Go, and now Deus Ex Go – has been an odd success. Each title championing sound and art, the series has clarified, cut through, and captured the character of its console cousins perfectly. So just how have they pulled it off? 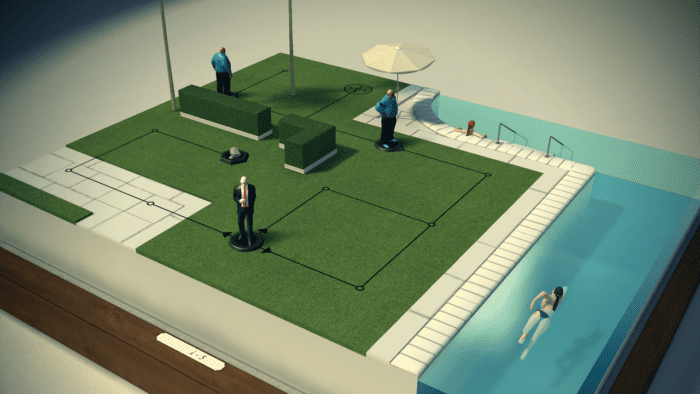 Behind the gunshots, the garroting, the exploration and the sleuthing, the Hitman series has always belonged to the puzzle genre. The freedom those games afford you is the freedom to choose your own puzzle pieces, but ultimately you only have one goal, one problem to solve. That’s all it’s really ever been, but much like its protagonist, it’s been hiding in plain sight, using props to fool you into misidentifying it.

When you first boot up Hitman Go, the cool, dreamy score kicks in – clinical and cold, but spacey and surreal. You unpack a Hitman-flavored board game, replete with mission-themed front cover, unfurling levels, and little subbuteo figures for characters. Moving along tram lines scored across the playing field, these figures zip through the levels with static charm. The feeling of watching your grim-faced little 47 making his herky-jerky way through the charming diorama feels great; more importantly, it feels like Hitman.  The clothes, the tools of death, the lavish and detailed levels, and the tongue-in-cheek characters – it’s all here.

The reason that Hitman Go works as well it does is twofold: Firstly, It presents you with a compelling, challenging puzzle box filled with fiendish solutions, variable strategies, and engaging mechanics. Secondly, it distills the essence and identity of the series perfectly while eschewing the gameplay and mechanics that players have come to know and love. It’s like having your portrait done by a boardwalk cartoon caricaturist. Despite the end result looking wacky, out of proportion, and exaggerated, it’s unmistakably you. Hitman Go draws strength from the similarity it shares with its bigger brethren in terms of mechanics: evaluate every approach path available, before considering the tools at your disposal, and plotting the right route to your mark. It’s all there. In fact, it’s so stark and stripped-back, it engenders your creativity with a sparser palette. 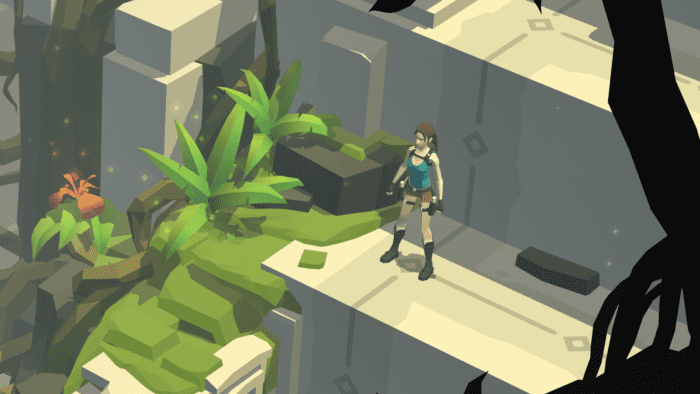 Playing it a little straighter than Hitman, Lara is presented not as a figurine but as a wonderfully polygonal avatar, exploring gorgeous natural environments that belie the same rigid level designs as before. The game turns back the clock by skewing the balance of gameplay away from combat (as it should be), and toward environmental puzzle-solving. Exploring spacious caverns, hearing the drips and the echoes off cave walls, you can’t help but be transported back to 1996.

The gameplay strikes a chord that hasn’t resonated in a very long time. Pulling levers, pushing blocks, collecting keys, studying the environment for secrets, flipping up over ledges with a handstand all while the airy soundtrack screams memory and prestige, it’s pure Lara Croft. Once upon a time, it was pure Tomb Raider, too. It’s telling that the reboot series takes the iconic franchise name, while the spinoff series takes the name of its heroine.

Go gracefully solves one of gaming’s big problems: Lara Croft’s perpetual identity crisis. It does this just as she might actually do by athletically side-stepping it. The trouble with the reboot is that whilst they are excellent games in their own right, they can’t escape the wide reaching shadow of Nathan Drake. While Drake has the cheery tone of the Uncharted series to lessen the impact of his mass-murdering, Tomb Raider 2013 took on a decidedly darker feel. As such, Lara goes from vulnerable young thing to orchestrating an island massacre rather quickly and without much narrative backing.

Lara Croft Go does what the older Tomb Raider games did: it doesn’t shoehorn grittiness into a character (and a game) that doesn’t really hold it up. Lara here is signaled by her iconic blue tank top and twin pistols. She acts as she used to do, less as a real, vulnerable human being, and more as physical avatar embodying our wish to soar through stunning environments, flipping and swan-diving with style. Pure Tomb Raider. 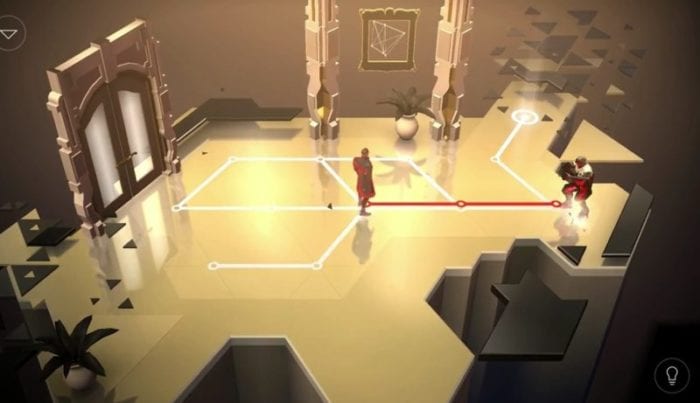 You would be forgiven for thinking that Deus Ex go is the odd one out, that there’s no way that a game as reliant on freedom, exploration, and variable options as the Deus Ex games can be replicated in turn-based puzzle format…but you would be surprised.

As ever, the game’s color palette and soundtrack offer an experience packed with character, and conveying the same tech-induced clinical paranoia of the console series. Watching the smoothly defined (and appropriately block-colored) Adam Jensen as he sleuths through corridors and takes down enemies with his nanoblades is utterly charming, and the game utilizes the interconnected-triangles motif first stylized in Human Revolution.

The one elusive element that Deus Ex champions is choice, while the Go series has single set solutions to each level. It’s hardly a happy marriage. However, it is within the framework of each level that freedom reveals itself. Freedom born of experimentation makes you feel as free as in any Deus Ex game.

Jensen’s tools are reproduced wholesale, giving you a plethora of different approaches to experiment with: computer hacking, invisibility, and brutal take downs all give you options with which to sleuth your way past guards, sentry bots, and track down your mission objectives. It’s the most complex of the three, and it’s with the experimentation that Deus Ex Go truly captures the freedom of the series. Hacking floor panels to trap opposing guards, or looping back around on yourself to knock them down; stamping out turrets, or cloaking to move past them; trapping an alerted enemy behind a passive one, effectively freezing him. Deus Ex Go will make you feel as though you have truly exploited the system it’s presented you with, and it’s this emergent feel that hearkens so effectively back to the halcyon days of the PC original.