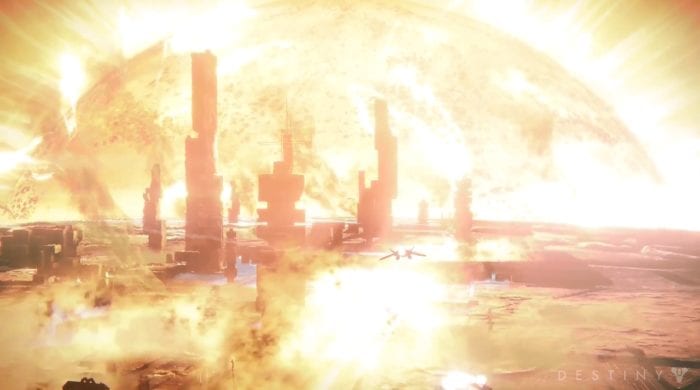 Year Three of Destiny is right around the corner. It’s actually kind of amazing that we’re here in 2016, and Destiny is still very relevant and popular. Fans of the game have looted the inner solar system’s most prominent landmarks such as Earth, the Moon, Venus, Mars and hell even Phobos. Somehow though, Mercury has yet to get proper PvE treatment.

Ever since I first visited the Burning Shrine back in Year One, I’ve held out hope that one day we would be able to visit the planet outright. However, time is ticking. It’s incredibly unlikely that we’ll see any of Mercury other than in the Crucible in Rise of Iron, and by most accounts, Destiny 2 will probably debut sometime in 2017. If I were a betting man, I’d wager that Destiny 2 will take us away from the inner planets, instead of revisiting them. So, if we’re ever going to get a Mercury based expansion, it needs to happen soon.

Skipping Mercury would be a shame as it is one of the most beautiful and interesting places in the Destiny universe. For those unfamiliar, Mercury (thanks to helpful space magic), was a garden world (read: livable) during humanity’s Golden Age. However, after the events of the collapse, the Vex eventually came knocking and transformed it into a Vex stronghold. As described in-game, Mercury was turned into a machine in just days.

Mercury, now littered with Vex structures, is largely abandoned, at least to the naked eye. The best account of what Mercury is currently like comes via The Lighthouse Grimoire Card. It’s rather long, so you can read it in its entirety here via Destiny Wiki, but here’s a highlight.

We approached peacefully and kept our weapons holstered. The sights we saw… Executor, Mercury is a beautiful place, and forbidding. On descent we mapped sprawling patterns of Vex light, an entire metropolis of unknown purpose. The Spires strobe with lightning. A mist of burnt rock or some other effluvia blows across landscape cut into circuits the size of cities. There is an atmosphere, as in all post-Traveler records. The Vex have not disposed of it.

From the surface the Sun is too large and too dim. Perhaps it is the influence of the Vex constructs distorting the image. Perhaps Mercury is in many places at once. We stood for some time staring into the solar fire. I hold myself responsible for the delay.

The site we were invited to is clearly a Cult of Osiris camp. We found stores of Glimmer, equipment, and books. A grounded ship of conventional design rests unguarded. The architecture is clearly, self-evidently Vex, but it has been ornamented extensively with fabrics and ritual objects of unknown provenance.

I became convinced during the inspection that we were being watched. We ordered our Ghosts to stay close. One of my Fireteam suggested we search for connections to the Trinary Star cultists, but if they exist we couldn’t see them.

Creepy! Of course we don’t have to rely solely on the Grimoire to give us a feel for what Mercury is like. Guardians are currently able to visit it in PvP via The Burning Shrine, Vertigo, The Lighthouse social space (after a perfect Trials of Osiris run), and once again soon via the PS4 exclusive Crucible map, Icarus.

Brief visits via the Crucible and Grimoire entries just doesn’t do Mercury enough justice, though. What a planet as cool as Mercury in Destiny truly deserves is an expansion at least in the same scope/size as The Dark Below and House of Wolves. Although we have no firm evidence to believe that it will ever happen, there is a little bit of hope.

A few weeks ago, there were some whispers about Vex themed content. In an interview with Metro, Destiny’s world design lead Steve Cotton danced around the idea of giving the Vex their own expansion. Not confirming or denying it when asked about it, but leaving it just vague enough to keep hope alive.

Considering that Mars is primarily Cabal territory (if we can’t give the Cabal Mars at least then they really have nothing), and we already have the Vault of Glass on Venus, what better way to climax a hypothetical Vex expansion than with a raid on Mercury?

Although it would be great if Mercury was, it doesn’t even need to be patrolable, if that’s too much to ask for. Give it the Phobos treatment where there are just a few missions taking place on it, and finish it off with an outdoor raid that will let the power of the sun shine in while Guardians battle through the glassy machine planet.

We can dream right? One step at a time though. Rise of Iron releases on PlayStation 4 and Xbox One on Sept. 20. Icarus, the newest Crucible map on Mercury will debut the same date exclusively on PlayStation 4.