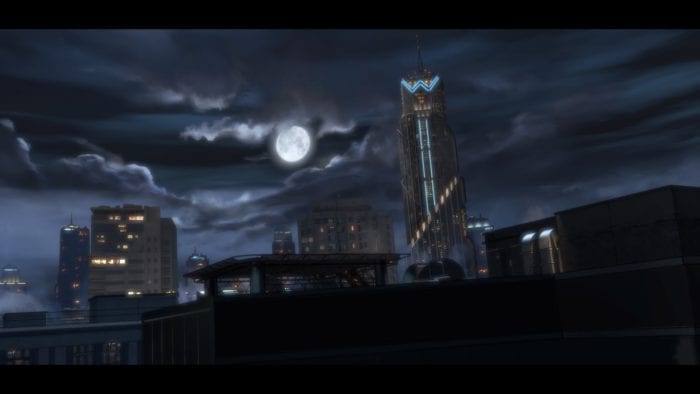 Following on from the first episode of Batman: The Telltale Series was always going to be a difficult one. It had found a perfect balance between the QTE-based action of Batman and the more human and emotional side of Bruce Wayne. Moving into episode two, titled Children of Arkham, and dealing with Bruce coming to terms with his newly-discovered family legacy, it seemed unlikely that Telltale would continue to strike that balance.

Due to the number of plot points and potential spoilers during Children of Arkham, reviewing this episode comes more from a point of view of the gameplay and the fragile dynamics and relationships in Gotham.

The second episode began by continuing on from the awkward exchanges between Bruce and Alfred. Returning to a familiar location from Batman’s background, the action centered on uncovering the real truth behind the Wayne family’s past. It was only a brief reintroduction to the millionaire playboy, but one that helped set the scene and tone for the rest of the episode.

During Realm of Shadows (episode one), we got an idea at just how gritty Telltale could take this new series. The freedom at the developer’s disposal is prevalent thanks to the series’ standalone nature in this world. This was a theme that continued to recur through the episode. Gentle reminders that there was no telling what could come next, especially after the revelations of the debut.

The second chapter completely shifted the scenario, placing Bruce in a far more conflicting situation. This is where Telltale’s storytelling shines: dropping these familiar characters in which fans are so used to them acting in a certain way, and giving you a choice to change that without clearly signposting the ‘correct answer.’ Yes, you could do what makes sense for you to do as Batman in your head, but when put in control, it’s difficult not to want to push your suspect a little more and get your revenge where it certainly wouldn’t be undeserved. A boundary that the Batman from the movies would never cross, but one that your Batman might.

Episode two continued to hint at the importance of having allies around you in Gotham. Both Bruce and Batman see important relationship decisions tossed at them during the entirety which, if developed on further by Telltale, could lead to some interesting character dynamics between Gotham’s big figures and how they act toward each of the two personas. It was something touched on in episode one with Vicki Vale noticing the scratch on Bruce’s face from his encounter with Catwoman on the rooftop. Realm of Shadows laid the foundations, and Children of Arkham is taking it in a promising direction.

The rest of the chapters went by and it was clear that the blurring of the line between Bruce and Batman is coming more to the forefront as the season progresses, even going as far as introducing the ability to tackle a situation as one or the other. It’s no longer simple enough to determine the pros and cons of opting for one over the other. Bruce proves he’s more than capable of taking care of himself, and Batman is just as likely to have to make an important decision where you’d think brawn would always be more important.

Merging these two forms of gameplay into both characters as opposed to keeping things cut and dry helps to keep the action entertaining and unpredictable. I’d have much rather tackled the big events of chapters three and four as the other side of our protagonist, but instead found myself learning to adapt to the new advantages one may have in this circumstance over the other. It’s a novel way to change our perceptions of the tried and tested Bruce/Batman formula.

Episode two was ultimately a driving force for the story and it served its purpose well. There were very few instances I found myself tired of what unfolded in front of me and that’s probably because events and new story points are unveiled at such a fast pace that it’s sometimes difficult to piece it all together. But Children of Arkham’s pacing worked well to allow for times of contemplation to piece everything together.

Unfortunately, the second episode highlighted a drawback I wasn’t sure of in my review of episode one, and another more common technical issue. While I’d enjoyed the QTE action of Batman’s fists in episode one, I hadn’t been certain how long this could stay fresh for. By the end of one fight scene this time around, it became clear how much I’d rather be in charge of the action than just confirming the hits with a press of a button.

It was still satisfying to watch the action unfold in Telltale’s beautiful art direction, but I missed the hard-hitting and bone-crunching feel of attacks from the Arkham series. A comparison that’s difficult not to make considering they’re siblings of the same franchise and medium. It was all culminated in a single moment after I’d knocked the last of a group of goons out. I had activated my finishing move and was waiting for the satisfying feeling of putting the last one out and yet it didn’t feel any different to the rest of the 20 punches and kicks I’d dropped. It didn’t quite feel special enough to warrant the intense build of filling the gauge and left me wanting a more badass finale to our punch-out.

The other issue came in the form of something that plagued the game’s launch on PC. While my experience with the debut episode had run perfectly and bug-free thanks to the updated engine, this time around things weren’t quite as smooth. There was once or twice where the framerate completely dropped or the game froze up for a couple of seconds. It was nowhere near frequent enough to detract seriously from the action, but something worth taking into account if you had issues first-time around.

Episode two is a strong continuation of Batman: The Telltale Series, albeit a little slower than the opening hours. While plot points were coming at you quickly, the moments following kind of took the heat and excitement out of the moment in favor of reflecting on what just happened. The QTE action was still looking great, however, the lack of satisfaction and control in the way these played was disappointing as I felt it could have gone either way in the debut. While this is disappointing, it’s by no means something out of the realm of possibility to be worked on as the upcoming episodes are wrapped up.

Batman: The Telltale Series is still firing on all cylinders in terms of story, and is introducing new and more complex dynamics to character relationships with Bruce and Batman, as we should know to expect from the studio. Due to this, I find myself less enthused about pulling off slick combos as Batman, and more about watching how he and his human side tackle this sticky situation and the consequences of their choices. Things certainly didn’t look to be getting any better for Batman, which leaves me thinking; Is this Batman story necessarily going to end with Batman coming out on top?