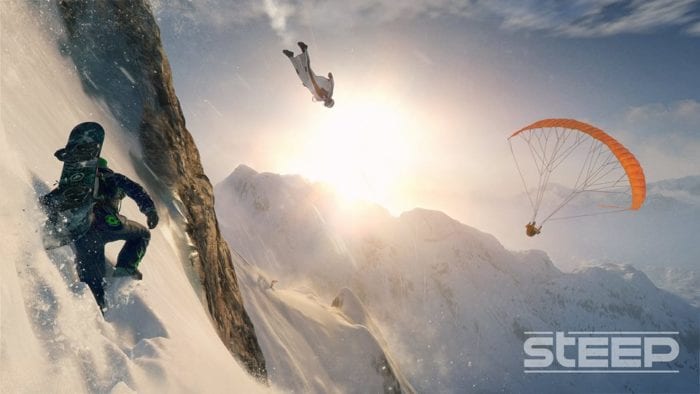 Winter sport games are somewhat of an endangered species these days. Because they aren’t in as much favor as they once were in the 90s, it’s hard to tell what kind of reception and interest these types of games would get if released in the present day. With that, seeing a potentially risky game like Steep from a major company like Ubisoft is refreshing, especially in a world where established franchises and sequels reign supreme.

The obvious comparison to make would be to EA’s most recent SSX release back in 2012, considering they are both games that feature winter/alpine events. Besides that they both include snowboarding and wing suits though, there’s really not a whole lot in common between the two when it comes to how they play and feel. Even in its more gritty and “realistic” 2012 iteration, SSX was very much an arcade-y type game. It encouraged over the top combinations that wouldn’t even be remotely possible in the real world.

Steep instead feels much more rooted in realism. Sure, it bends reality a bit for sure, since a totally realistic alpine game probably wouldn’t be exciting for many people. You can preform tricks and expertly control a wingsuit at an extremely high level in Steep. All of that said though, the physics of how your character moves through the snow feels natural and much closer to its real-life activity.

You can feel how the smoothness of the powder effects the way your snowboard is able maneuver around. If you want to get any kind of meaningful air, you need to find a suitable ramp (no flying high of little bunny hills), time the jump just right, and pay close attention to making sure you land properly. If you don’t and you land awkwardly or just straight up wipe out, Steep will tell you how much force you landed with to let you know exactly how bad you screwed up.

Because of these added steps needed to preform tasks that were much simpler in other games, Steep is likely going to be a different kind of fun. Instead of getting a kick out of inhumanely zooming down mountains while flipping every 10 seconds, Steep feels more like it’s about learning the curves of each hill, and mastering its movement. Satisfaction through perfection.

Big picture wise, Steep is a social open world game about competing in various races and challenges ideally with friends across various mountain drop zones. When you drop into an area, you’ll seamlessly matchmake with other players looking to do the same challenge. You can also send your high scores to your friends and challenge them to top it. You can play the game solo with AI if you want, but by the looks of it, you’d be willingly ignoring a lot of what Steep wants players to enjoy.

As far as events go, at E3 2016 we had the opportunity to mess around with various wing suit and snowboard challenges and races which are two of Steep’s four featured events which also include Skiing and Paragliding. Besides competitive modes, there were also plenty of free play areas that you can just screw around on. It’s something that SSX 2012 desperately needed at launch, so it’s a relief that Steep already has that taken care of.

There also seems to be a lot of zany ways to customize your character. Whenever I spawned in, my character would be sporting a different outfit each time. One time I had a clown mask, another I was in a Yeti suit. This implies that there is going to be some kind of way to personalize yourself, but the team member I spoke t admitted that how that is going to work exactly in the final product is still undecided.

Even though Steep was just revealed, everything about the gameplay seemed polished. I didn’t run into anything too wonky. What was disappointing though is its visuals. Steep isn’t the world’s prettiest game especially by outdoor sport standards. Having a crisp looking backdrop would make Steep’s setting that much more immersive. Instead, in it current state, Steep looked a little fuzzy, dated, and lacking definition. Perhaps the visual quality is a necessary sacrifice to make its open world work properly, but hopefully it’s something that is, or can still be, improved on in the future.

Honestly, while racing and gliding around is fun, Steep needs a special sauce. Its open world vision is a good place to start, but it needs to be populated with more than just a bunch of races and challenges. Steep needs something fresh that is going to keep people hooked for the long run if they want their social features to get traction. It could be a silly mode or two that draws people to the game, or some kind of RPG/grinding mechanic with benefits that properly reward players for the time they invest into the game.

What Steep should try to avoid being though is just another game that does the same things as its predecessors, just hoping that if they do it, it will somehow work out better. Even early on, Steep looks like it’s going to be a fine game capable of scratching that wintery itch; but as of E3 2016, Steep hasn’t yet demonstrated that it is going to be anything more than an incremental improvement over similar games that we have seen before.