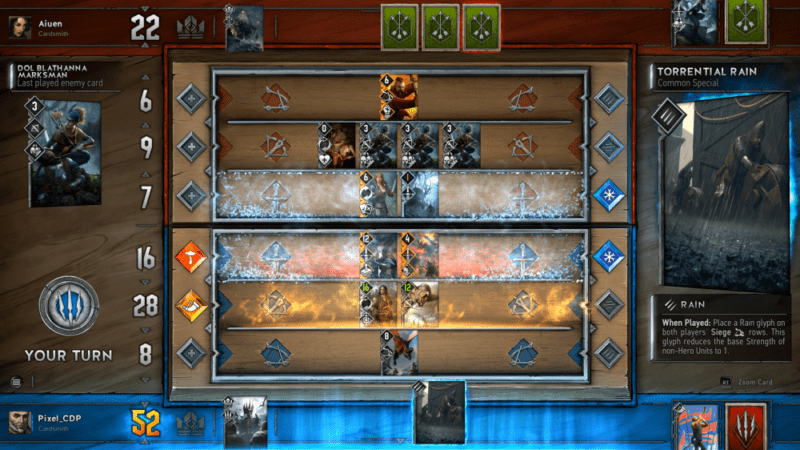 As it appeared in The Witcher 3: Wild Hunt, Gwent would have made a horrible standalone game. I say this as someone unquestionably obsessed with the hobby, who’s collected every card and memorized the small handful of ways to chokehold an AI. I say this because I’ve played Gwent against humans in real life, both of us enjoying the physical decks and both of us quickly realizing the strongest strategy (cough spies) and the one unbeatable deck (COUGH NILFGAARD).

That doesn’t mean in-game Gwent isn’t wholeheartedly lovable, because its capable design and ties to the Witcher lore truly are. CD Projekt heavily capitalizes on both by revamping standalone Gwent with clearer, highly animated UI and new cards with mechanics thoughtfully rooted in the Witcher narrative. Then they also took care to flesh out each faction with layered strategies and plan hearty single-player campaigns.

They pretty much nailed it.

Most importantly, Gwent: The Witcher Card Game is a chance to fall in love with Gwent all over again. Each faction has evolved to encompass new tactics and refined identities. Weather-dependent Monster decks boost Wild Hunt cards with Frost and summon Foglets with Impenetrable Fog. Triss can cast spells when played, either to incinerate or clear weather. Scoia‘tael sends commandos into enemy lines to lower the attack of nearby cards, which is to say Scoia‘tael actually matters now. My mortal nemesis, Nilfgaard, isn’t among the launch factions, but I am promised they’re next up, and that they will be balanced as hell.

This isn’t a game of spies any longer, either, since now they only allow for one card draw. In fact, a developer making rounds through our demo matches noted to one player that their deck of spies won’t guarantee victory this time around. My greatest tricks are tricks no more.

As novel as my time with the game felt, there’s even more content on the horizon. Additional cards, game modes, and factions are in the works, though none of them I predict will outclass the Roach card which – much like our companion – adorably pops into a random spot on your field whenever a hero is played.

Longevity won’t lie solely on PvP’s shoulders, thankfully. Gwent goes ahead and throws in 10+ hour single player campaigns featuring untold Witcher universe stories, most of which won’t revolve around Geralt. These unfold by the way of a top-down 2D map, filled with explorable locations and narrative encounters that become your method of card collection. In a brief preview of the campaign, I watched Geralt join a group of mercenaries, then travel to abandoned ruins where he found highly flammable Scorch chemicals. As Geralt placed them in his pack, the Scorch card was added to my collection. One of CD Projekt’s primary goals is that players feel they are bringing allies and equipment into battle, not just cards. These story moments, backed by voiced dialogue, animations, impactful choices, and characters both old and new look to be an engaging vehicle for that type of immersion. More than a mini-game torn from the universe, Gwent is becoming a worthy medium for it.

The Gwent I encountered at E3 is an altogether healthier beast than its inspiration, and those who love the original are going to have a hell of a time experiencing The Witcher saga unfold through the charming card game’s full potential.