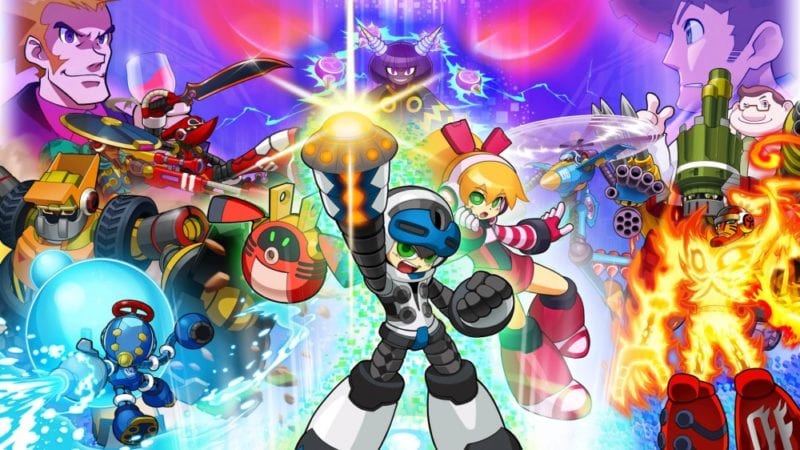 Mighty No. 9 on PlayStation 4

Mega Man is a series that has lied dormant for years. It’s been 10 years since the little blue android has received a bona fide new release, and that left many fans longing for something to fill its space, especially since Capcom seemed to have no interest in fulfilling that wish. In 2013, a little Kickstarter campaign popped up and it was being produced by none other than Keiji Inafune, a man that had worked on countless Mega Man games and even designed Zero, one of the series’ standout characters. Mighty No. 9 was to be a spiritual successor to the challenging action platformer that had sunk its teeth into players all those years ago, while at the same time being something new and fresh. Unfortunately, while straddling both of those worlds, it stumbles immensely.

Mighty No. 9 struggles from the moment the game begins. Movement is stiff and slow, quickly giving players a taste of what’s to come for the next few hours of their lives. The first world served as a tutorial as well as an introduction to the story. Said story is largely forgettable, revolving around a futuristic world that happens to take place “in the present day” (seriously, that’s the timeline the game gives you). Robots are being corrupted and it’s up to you to free them from whatever mysterious force is causing them to rampage. Of course, as is the case in classic games, the only way to save them is to beat the ever loving crap out of them and absorb them. It’s really just an excuse to run around, but you’d be forgiven for not paying attention thanks to the weird script and the phoned-in voice acting. There were times where I honestly couldn’t tell who was speaking thanks to the fact that some of the characters sound almost exactly the same.  I could’ve easily looked past all of this though, since all I was here for was the action. But that first level didn’t provide the best impression of Mighty No. 9’s gameplay.

The tutorial did a semi-decent job of teaching you the very basic fundamentals of the game – walk, run, dash, shoot- but the rest of the game’s intricacies are hidden in a menu. You have to pause the game, go into tips and learn that way. New tips weren’t added until you came across them in the game, meaning you never even knew what it was you needed to know a lot of the time. It felt odd to have important information tucked away outside of the action, especially when you consider how challenging the game is and how necessary an understanding of the mechanics can be. You’d expect for Mighty No. 9 to provide more insight into the gameplay as you progress to more challenging areas, but it never happens. Everything is added to that menu outside of the action.

Lack of a full tutorial proved to be the least of Mighty No. 9’s problems in the long run, though. One of the elements that made the Mega Man series so enjoyable was that it was both challenging and fair. You had to figure out each enemy’s pattern, and then use a strategy you built to emerge triumphant. There was a magic to beating the bosses in the proper order and then leveraging their abilities against the weaknesses of the others. Mighty No. 9 partially captures that, but mostly relies on some horribly balanced gameplay to deliver challenge. It’s less a matter of skill and more a matter of getting around horrible annoyances.

One of the strongest examples rears its head during every single boss battle. Bosses have the ability to stun you, which is fair, since you can do the same for the most part. The major difference is that you have to tap the buttons like a maniac to escape before losing about half of your health. That may not sound like a big deal, but when you realize that the amount you need to tap is nearly impossible (even if you start tapping as soon as the stun starts), the frustration grows to unbearable levels. They’re not unbeatable by any means, but each of the Mighty No.’s (all of the bosses are Mighty No. something)  will spam these stun attacks removes any chance you had at a fun, strategic encounter.

One of the largest transgressors in Mighty No. 9 for me, though, was the lack of consistency. In trying to be both a spiritual successor to Mega Man and a new action game, a lot of the elements feel disjointed. On one hand you have really good enemy design, forcing you to be mindful of each encounter as you switch abilities and try to build combos. During brief moments of genius, I found myself battling numerous enemies, dashing across the screen and enjoying the pixels shining on my television. But on the other you have poor level design that tries to integrate the new mechanics. Different dashes, new world hazards (of which there are far too many insta-death sections), and some of the worst hit detection I’ve come across in a game so hell-bent on requiring precision.

There were several times when I got almost completely through a level and died. I wasn’t upset that I died, in fact, I was kind of happy that I figured so much of the level out and was eager to race through and use what I had learned. Except I couldn’t use what I learned, because it just didn’t work the next time through. Mighty No. 9 randomly changed its rules on me, and it would be a wall I would come across time and time again over the hours I spent with the game.

The biggest takeaway I have from Mighty No. 9 is that it was such a letdown. It had so much potential, a chance to reignite the passion for challenging platformers. But in some ways, it overreached. It briefly captures what made Mega Man so special, but those moments are too few and far between. Chasing that experience eventually became more trouble than it was worth when you had to deal with every component of Mighty No. 9 that wasn’t just Mega Man. Everything that was added to keep this from being a straight rip-off only ended up getting in the way, and that brought the entire experience crumbling down.