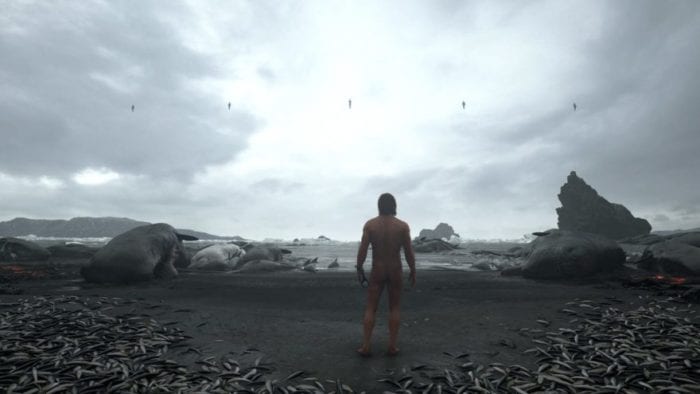 Hideo Kojima made quite the splash at Sony’s E3 conference this year when he finally unveiled his new game, Death Stranding. As expected from the man who loves messing with his fans’ minds and forcing them to speculate and theorize about the themes and meanings included in his games, the Death Stranding teaser trailer has sparked a pretty extensive discussion amongst viewers. The game already has its own subreddit, and fans are creating discussion threads to share their theories about the game, and what messages are hidden inside the trailer.

First off, the Death Stranding trailer starts off with a quote from William Blake’s poem, Auguries of Innocence. The excerpt is as follows:

“To see a world in a grain of sand,
And a heaven in a wild flower,
Hold infinity in the palm of your hand,
And eternity in an hour.”

I won’t bore you with an in-depth analysis of the entirety of Auguries of Innocence, but it should be noted that the quoted passage contains a lot of imagery of nature. In fact, the entire poem bears a lot of references to nature, and the environment in general. However, I believe this passage was chosen particularly because of its references to time as well. Taking a look at the rest of the trailer, it’s very likely that Death Stranding is going to be a game that deals with the perversion of nature, with sci-fi elements like time travel and black holes.

After the official reveal of Death Stranding, a poster for the game was released, and we got a better look at the locks hanging around Norman Reedus’ character’s neck. Sharp-eyed fans have pointed out that the equations etched on the locks are representative of the Schwarzschild Radius and the Dirac Equation. A quick Google search has revealed that these are concepts that deal with science-y things like black holes and time travel, as mentioned above. This heavily suggests that Death Stranding is going to be a sci-fi game, and perhaps Reedus’ character is someone who’s fallen out of time.

Another great theory presented by the folks over at Reddit brings up something called the primordial soup and cetacean stranding. The teaser treats us to a gorgeous shot of the sea, as well as dead marine life on the beach. The primordial soup theory suggests that the sea is a body of water that gives birth to life and nature. In the case of Death Stranding, we see beached whales, dead marine life, and the grey palette indicates the general death of the environment. It’s a clear inversion of the primordial soup theory, and these are my thoughts – maybe Reedus’ character is some sort of space traveler who ‘harms’ nature and goes against its laws by experimenting with black holes, and this brings about widespread death and decay in the world. And maybe the game’s about the consequences of messing with nature, as shown by his distraught expression in the trailer, as well as his being marooned (or stranded) on the island.

Towards the end of the trailer, we see five floating figures in the sky. The common theory is that perhaps these represent some sort of higher power in the world, and perhaps they’re punishing a wandering space traveler by stranding him on a decaying island. Of course, the elephant in the room must also be addressed – the strange baby with an umbilical cord attached to Reedus’ character. I don’t have any theories on this one, and Kojima has been quick to dismiss the notion that the baby is a clone of Reedus’ character.

However, the perversion of nature is a big theme in this one. We’ve got a male character supposedly ‘giving birth’ to a baby, and not only that, his strange c-section scar suggests that this was an unnatural birth as well. We’ve got dead marine life, dead whales, a dreary island and a black sea, as well as the possibility of black hole jumping, which can be seen as going against the laws of nature too. One last thing to note is that the space suit featured on the Kojima Productions mascot might just make an appearance in the game. Yes, Kojima did say that Ludens would not be featured in his new game. However, that doesn’t mean the cool space suit on Ludens won’t be in there. Besides, fans have made the observation that the eyes on the character model used for Ludens look remarkably similar to those on Reedus’ character model from PT, so… take that for what it’s worth.

Whatever it is, Kojima has confirmed that Death Stranding will be a PS4 exclusive action game. And judging by the looks of the teaser trailer, you can be sure there’s gonna be some seriously mindblowing shit in there. What are some of your theories about the game so far? Let us know in the comments down below.