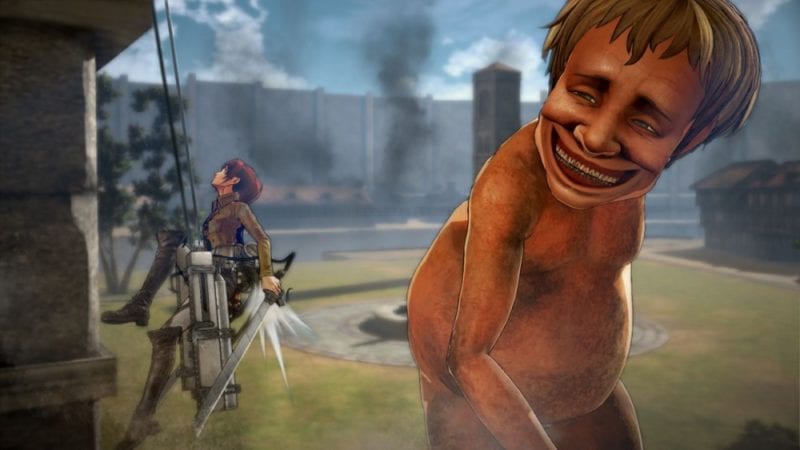 To put things simply, Attack on Titan is the perfect video game representation of the popular anime series. Aesthetically, the cel-shaded models of the game’s characters look lovely, and you almost get the sense that they were directly taken out of the 2D anime show and turned into 3D versions of themselves. The Trost District itself also looks like it was ripped straight from the anime, except this time you can actively explore the areas yourself.

The demo threw me into a climactic point in the story. After Eren gets eaten by the Titan, the District gets overrun by Titans. I played as Mikasa, and my job was to keep the Titans at bay while the citizens made their escape. Right off the bat, you get access to the series’ iconic 3D maneuver gear and you’re allowed to grab hold of surfaces in the city and propel yourself towards them. The verticality in the game feels smooth, and this lends itself pretty well to the flow of the combat too. The 3D maneuver gear is vital to your combat, as you’ll have to dart around the Titans to prevent them from grabbing you. The Titans themselves will have their limbs highlighted, and Mikasa can dismember them to weaken them and also immobilize them. You can go for their necks to deal good damage, but it’s often worth it to go for the limbs, as those will give you materials to collect. Also, some Titans are actually smart enough to protect their neck, forcing you to rethink your strategy.

You’ll also get a subjugation grade after taking out each Titan. Getting grabbed by one will automatically give you the ‘Efficient Subjugation’ ranking, which is the lowest of them all. There are two other subjugation grades, and those are based largely on how much damage you take and how many attempts you take to bring down the Titan.

Speaking to Koei Tecmo, they also stated that everything you see in the game, you will be able to explore. The Trost District itself is already large and sprawling, but considering that the game retells the story of the first season, there will be a lot to explore outside of the city as well. In addition to the main missions, marked by a red exclamation point on your map, you can also take on sub-missions where you’ll be able to help out some side characters and get them to join you in your fight. Hitting the R2 button after a focus gauge fills up will allow you to call for help, and your allies will home in on your position and attack any nearby targets. This also gives you a speed boost, allowing you to move around the city a lot quicker. It’s a handy ability to have, but it’s best saved for when you really need to get out of a bad situation.

Lastly, Koei Tecmo also confirmed that you will get to play as other characters as the story unfolds, and you can unlock 10 different characters after beating the main campaign. Aside from the main story missions, Koei Tecmo has also taken care to write in a few side stories that were featured in the manga but not included in the anime, as well as some original stories that were approved by the manga writer. Attack on Titan the video game is overall a very faithful recreation of the anime, and it looks primed to add even more valuable content to the lore and story.