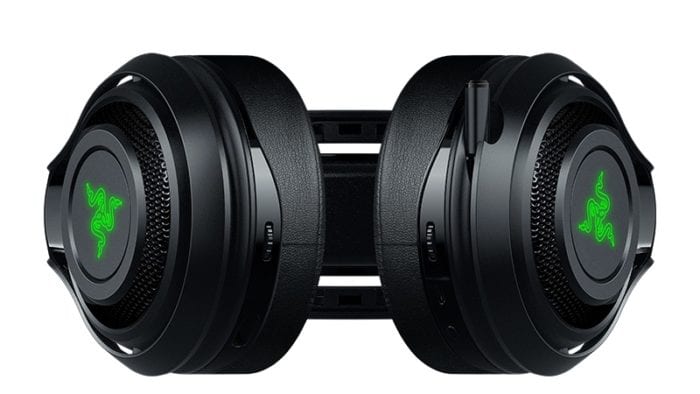 Ah, gaming headsets. Gamers will often find that although everything in their setup is perfect, the one thing holding them back is a solid headset. Sure, you could have the beefiest rig in the world or a shiny new console and a beautiful television, but if the sound isn’t right, it just doesn’t feel like it should. That fact becomes magnified when you’re the type who prefers co-operative, online play.

Your headset can often spell the difference between you having a smooth experience as you play with others or a horrid night of static, lost words, and weird sounds. More often than not, there is a solution; however, the answer to your problems usually costs an arm and a leg. Razer has attempted to come up with a solution for those who need a great headset, but don’t have $400 just laying around.

The Razer ManO’War is wireless gaming headset that provides 7.1 virtual surround sound, clear communication, and it works with both PC and the PlayStation 4. It’s priced at $170, which is a bit more than lower-end headsets, but it’s also much lower than nearly all high-end devices. Chances are that if you’re in the market for a gaming headset, you’ve already come across many of the $250+ options.

Before we get into the sound, two of the most important features of a good gaming headset are comfort and battery life. The ManO’War is relatively lightweight. Its tight design fits snugly on your head without feeling restrictive. The ear cups, which can often be troublemakers, are surprisingly comfortable, encasing your ears so you can enjoy the sound blaring through each speaker. However, if you’re the type who likes to move your headset around, such as to your neck, or maybe use only one ear, you will run into some troubles.

The tight design is meant to fit a player wearing the headset normally, with one cup on each ear and the band across the top of your head. Anything else causes the ManO’War to squeeze and pinch. It’s not a pleasant sensation at all, so if you need a break from the headset for whatever reason, make sure to completely remove it from your head.

Battery life is much more consistent than comfort factor on the ManO’War. Razer claims that you can use the device for 14 hours before needing a charge, and the claims hold up. I’m one to play for long periods of time through the night, and to leave my headset on so I can listen and chat while I do other things. I never had any issue with the headset suddenly dying while I was still looking for more time with it.

The sound on the ManO’War headset is where Razer makes up the cost of the product. This headset uses virtual surround sound, meaning it’s simulated through one driver in each ear cup. Thankfully, this doesn’t prove to be a big deal, as the sound was both dynamic and clear. Playing online with friends allowed me to tell where sound was coming from, and at what distance, so Razer definitely achieved what it set out to do… on PC, at least.

In order to take full advantage of the ManO’War headset’s features, you need the Razer Synapse app on your computer. This is what provides the 7.1 surround sound, as well as access to certain sound options. That app isn’t available on the PS4. So, when you connect the headset on there, you’ll get your clear sound, but only in stereo.

One thing that is consistent across either platform is the fact that there is virtually no latency. Everything was clear and there was no sense of lag between the action on my screen and the sound blaring through my headphones. Even a small bit of lag can become a nuisance, so I was happy to discover that even though I couldn’t get surround sound on my console, I could still enjoy issue free listening and chat.

In the end, the ManO’War proves itself as a great headset. Its tight design provided hours of comfort and the sound was crystal clear. It was better than I expected, really. But, if you’re looking for a feature complete device that you can use on both your PC and console, there are other options. Synapse limits the headset’s capability on console, drastically watering down the “Compatible With PlayStation 4” claim.