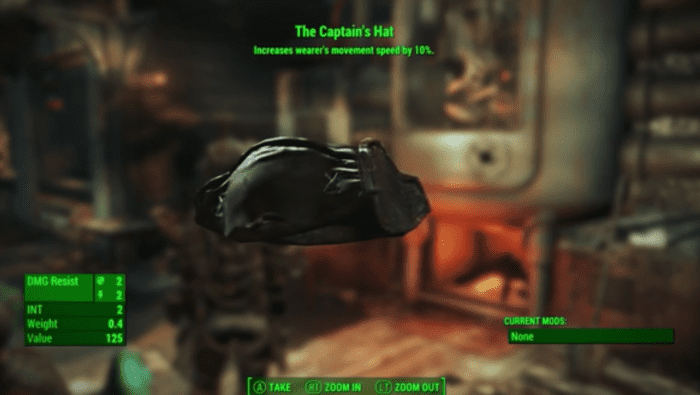 If you’re trying to get into the whole Fallout 4: Far Harbor theme, you may want to dress the part. Nothing helps you get that done better than The Captain’s Hat. It also doesn’t hurt that this piece of armor increases your speed by 10% (let’s see those nasty crab monsters try to catch you now).

To get The Captain’s Hat, which is essentially just a badass pirate’s hat, you need to just complete a specific string of quests. If you happen to be working towards the Rescue Diver Suit, you will actually have to complete most of the same quests, so you get to kill two birds with one stone.

The quest that actually rewards you The Captain’s Hat is called “Rite of Passage,” here’s how to unlock it:

Completing this questline also nets you The Captain’s Feast. This is a consumable that raises you XP gains for two hours.

For more Fallout 4: Far Harbor guides, be sure to check out our wiki.