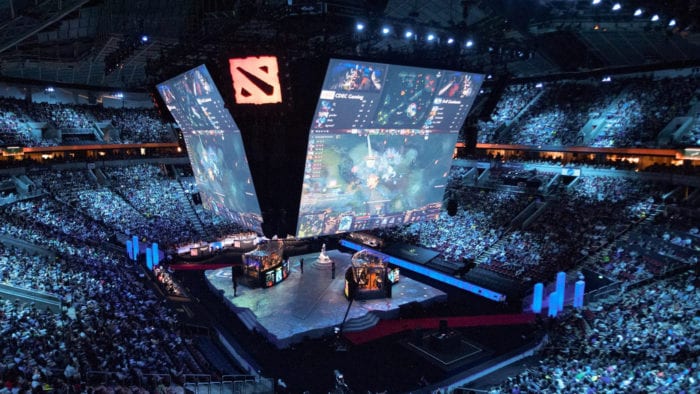 Until recently, online gaming competitions were nothing more than a fun way for people who enjoyed a particular video game to compete against others. There were no giant prize pools or sponsorships. Nobody could watch them on their TV or even on their computers. The competitions were all about the love the competitors had for the game. So how exactly did we get from tiny tournaments held in local LAN centers and small online gaming leagues to the global phenomenon we have today? Well, I’ll tell you how. Follow me, down through time and space to witness the rise of esports.

Before we dive into the rise of esports and the massive following that it now has, we have to look at the world through the lens of regular sports like soccer, American football, basketball, and baseball. Aside from American football, all of the sports listed above have a global presence, none of them more than soccer. It is the most watched sport on the planet. But, soccer was never really able to crack the sports mecca that is the United States. Even though some of the highest paid athletes on the planet play the game, the American public never gravitated to it like they did with American football or baseball. The best example of soccer’s failure in the US is the lack of screen time it gets on ESPN, the worldwide leader in sports. They choose to play reruns of SportsCenter over soccer matches most of the time, and the average number of viewers for the MLS playoffs last year was only 250k. For some perspective, over the last 3 years, Survivor averaged 11.5 million viewers in the US after 25+ seasons on air.  So if soccer can’t infiltrate every country in the world successfully, what can?

Esports can. One of the most important traits that video games have in their favor over every sport on the planet is global appeal. Every country that has electricity has video games, even war torn countries like Iraq, and almost every kid born during the rise of video games, between the late 1970s and today, has played one. Video game culture and acceptance has spread to more countries than some traditional sports ever will, and as the younger generation grows, the main viewing audience across the world becomes one that has been exposed to video game culture for their entire lives. If the multi-billion dollar mark for the industry is accurate, it seems like the world loves video games.

In addition to the widespread availability and acceptance, video games also cross all life barriers. Unlike some sports, video games appeal to everyone. It doesn’t matter if you are old or young, white or black, male or female, there is a video game out there for you. According to the Entertainment Software Association, which found the average video game player age to be 35 and 41% of the gamer population to be female, video games have a mass appeal that sports just can’t achieve.

Now that we have explored the why of esports’ global rise, let’s take a look at the how. Before Twitch, YouTube Gaming, UStream, and all of the other on demand game streaming sites, there was no way for people to reliably view live gaming events. The scene wasn’t big enough yet to catch the attention of TV, either. Because of this, there was no reliable way to get esports out there to the masses. The only way that people were able to view old CounterStrike or StarCraft matches was through recordings of the match or built in spectator modes. Then Justin Kan came along and changed the entire gaming landscape in 2007. He might not have known it at the time, but the creation of Justin.tv was the spark that started the global gaming fire.

Justin.tv was the first reliable platform that allowed people all around the world to stream their games, and pretty much anything else, live on the internet. This allowed millions of people around the world to view matches of all types as they were happening. At the time, it seemed ridiculous. Who wants to watch someone else play video games? Well the answer is a TON of people. As the platform grew, more and more gamers started to take interest in watching games, as well as playing them. By June 2011, the boom in video game viewers forced Justin.tv to spin off a new entity that was solely used for game streaming, Twitch.tv. Three short years later, in August 2014, Twitch was acquired by Amazon, Inc. for $970 million. The journey from online basement brawls to global phenomenon was complete. One of the largest corporations on the planet had realized that the future wasn’t in TV or sports teams, it was in gaming.

Current viewing statistics for Twitch show that they average over 6 million views per day, and in 2015 alone, people streamed 241,441,823,059 minutes of glorious gaming footage. According to Twitch’s math, that is 459,366 years worth of footage.

As esports go, Twitch streamed nearly every gaming tournament of 2015, including the record-breaking League of Legends World Championships, which raked in over 36 million viewers during the final match alone. Because of incredible statistics like this, ESPN, the previously mentioned worldwide leader in sports, has decided to put esports on your TV, and even start covering esports regularly on its website. Last year was the first instance of an esports tournament broadcasted live on ESPN, and without any advertising or marketing, ESPNs coverage of Blizzard’s Heroes of the Dorm averaged around 100,000 viewers. By Twitch standards, this is almost nothing, but it isn’t bad for esports’ first foray into live television in almost 10 years.

Thanks to this massive jump in visibility, gaming organizations like Complexity Gaming and Evil Geniuses, Cloud9, and many more have been able to carve out a living purely off of sponsorships and prize money. Now gamers around the world have the opportunity to pursue competitive gaming as a career. Growing up, it was my dream to viably play games competitively for a living, and it really touches a place in my heart to see players in today’s gaming world thriving off of esports alone.

The first worldwide esports sensation was Jonathan ‘Fatal1ty’ Wendel. He was the first player to transcend the game and make a name for himself outside of competitions. His career earnings from tournaments totaled up to about $450,000, but aside from his tournament revenue, Wendel sold his Fatal1ty branded gaming accessories around the world, which increased both his profile and his pocketbook.

According to esportsEarnings.com, Peter ‘PPD’ Dager, a player on Evil Genius’ DOTA 2 roster, is currently the highest earner in esports history with over $2 million in earnings from tournaments alone. That doesn’t even include his yearly salary! Outside of the US, you have teams that are sponsored by massive corporations, like the Samsung Galaxy South Korean esports organization that fields both League of Legends and Starcraft 2 teams and the GE Tigers League of Legends team. Clearly, these massive corporate entities have realized that their dollars are being put to good use in gaming.

Not only has the esports explosion provided a living for the players, it has also opened up a new market for esports analysts, production teams, shoutcasters and personalities like Jaycie ‘Gillyweed’ Gluck, Anna Prosser Robinson, and many more. eSports isn’t just for the players anymore, it is for everyone who wants to be involved.

At this point, it is pretty clear that esports is here to stay, and it is important to remember that these impressive statistics and earnings are the result of only 3 years of real viability in the market. The future is very bright for young gamers out there. Colleges like Robert Morris University, UC Irvine, University of Kentucky Pineville, and many more now offer scholarships for esports athletes, and more are expected to join the crowd in the coming years.

The days of playing tournaments for $50 max prizes and basement esports are over. Now kids can look at their parents and say, “I want to play video games for a living,” and be able to back it up with hard numbers. We are all in a position to watch the growth of esports across the world. Now truly is the best time to be a gamer.