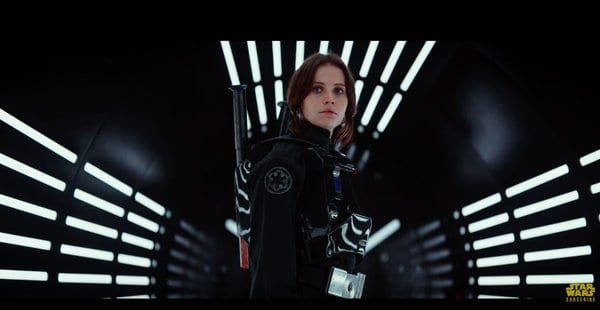 In case you’ve somehow missed it, the first trailer for Rogue One: A Star Wars Story was released today. Taking place between the events of Episode III: Revenge of the Sith and Episode IV: A New Hope, Rogue One tells the story of a group of Rebels and their attempt to steal the plans to the original Death Star from the Empire.

This teaser gives a first look at Felicity Jones in action as Jyn Erso and the first insight into her character. Jyn faces down Stormtroopers with deadly skill and even sasses Mon Mothma, revealing herself to be an anarchic badass with a strong Rebel streak. She is also seen wearing what appears to be Shadowtrooper or Death Star-gunner armor, possibly as part of an infiltration scene mirroring Luke and Han’s Stormtrooper disguises from A New Hope. Her interactions with Mon Mothma and Diego Luna’s Rebel leader alongside Forest Whitaker’s confrontational dialogue give the impression that Jyn is a figure who skirts the edges of what the Rebellion deems acceptable, fitting for the lead of a film entitled Rogue One.

The trailer also showed some of Jyn’s companions in action. She’s pictured with Luna running down a hallway being chased by a variety of Imperial troops. This seems to go with rumors that his character would join Jyn in the final infiltration of an Imperial base to recover the plans. He also looks on during her confrontation with Mon Mothma, hinting that he is brought in to provide her with a less rash, more experienced partner.

Donnie Yen, famous for his role in Ip Man, has grabbed some screen time too. His character, previously seen to be blind in the initial teaser image for Rogue One, is shown using a staff to defeat several Stormtroopers in melee combat outside a base-like structure. In the Star Wars universe, Miraluka are a species of eyeless humanoids who ‘see’ with The Force. Donnie Yen’s blind character could be the core-universe’s interpretation of this species. Could this be the introduction of a Miraluka-type alien to the films?

This same base, possibly the setting for the above image, is then shown as the part of a larger battle as AT-AT walkers descend upon it and Ryn, dual-wielding blaster pistols, leads Diego Luna and Wen Jiang in a desperate charge against them.

The trailer also gives some insights into the nature of the villains in Rogue One. Ben Mendelsohn is shown in full Imperial military regalia. His insignia marks him as an Admiral, but eagle-eyed Expanded Universe fans will know that his white uniform makes him a Grand Admiral, the Imperial’s highest military rank beneath the Emperor himself. His character is then shown surveying the aftermath of the above battle. Could his assaults be behind driving the Rebellion to the point where they launch their last-ditch attack from Yavin IV in A New Hope?

Finally, and most intriguing of all, is a brief shot of a black-cloaked figure kneeling before a glowing tube flanked by Imperial Guards. The size and posture of the character make it very unlikely that it is Vader or Palpatine… could this mysterious figure be a new Sith, possibly an apprentice to Darth Vader? It appears Star Wars fans will just have to wait and see.

Rogue One: A Star Wars Story will hit cinemas in December 2016.

Are you excited for the first cinematic side-story in the Star Wars Universe? Let us know in the comments.