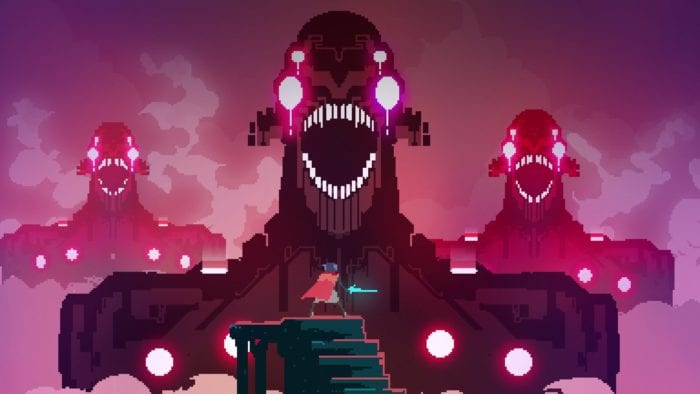 Hyper Light Drifter doesn’t really give many players much direction. You’re dropped into its beautiful world and left to figure everything else out for yourself. However, it shouldn’t take long for you to realize that the enemies you’ll encounter are going to be pretty tricky. Here’s how to get yourself some grenades to give you that little bit more firepower.

In order to get grenades, you’ll need to find some Gear Bits. Gear Bits are essentially the fragments of the game’s currency and can be acquired in a number of different ways. Once you’ve found four Gear Bits, these can be turned into an Upgrade Bit which can then be used to purchase upgrades, new abilities, and extra weaponry.

To get the grenades you’ll need to make sure you’re in the hub area. This is the central village area which has the strange diamond directing you to the four different worlds to go and explore. Just to the South of this diamond, you’ll find a shop with an image of what looks like a bomb on the sign. Simply head in here and speak to the guy behind the counter by holding ‘Y’ on your controller.

You’ll then be given the option to purchase bombs. To buy them, you’ll need three Upgrade Bits. So make sure you’re exploring the world of Hyper Light Drifter at all times. Hold down ‘A’ on your controller to confirm the selection and voila, you’ll now have grenades added to your inventory. These will be assigned to the ‘RB’ button on your controller.

And that’s all there is to it. Now you have some explosives to help you on your quest.