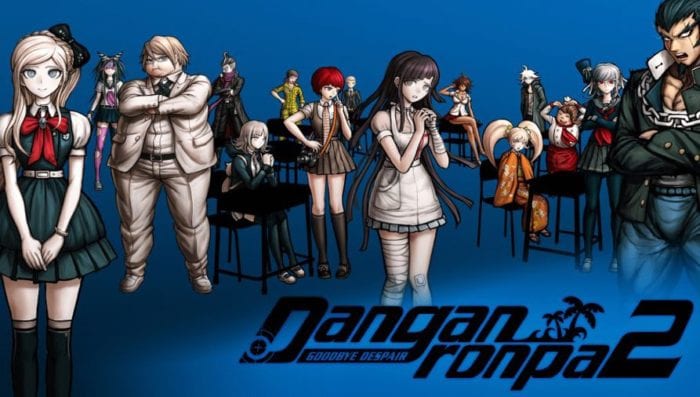 Danganronpa 2: Goodbye Despair brings fans back to the incredibly insane world where high school students have to listen to the words of a black and white bear, and kill each other to survive. Just as Trigger Happy Havoc dictated that the 15 (give or take) students had to commit murder and survive a class trial to get out of a school, Goodbye Despair takes that same concept and sets it on a beautiful, tropical island.

This time around, players take control of Hajime, a student at Hope’s Peak Academy, who can’t quite remember what his ‘Ultimate’ talent is. He, along with 15 other students, find themselves on Jabberwock Island as a cute bunny named Usami tells them to bond with each other on this heart-throbbing school trip. However, things quickly go awry when Monokuma shows up and takes over the party, changing the rules to get the students to murder each other instead.

Trigger Happy Havoc provided fans with a heavily stylized visual novel adventure that kept them glued to their screens from start to finish, so naturally Danganronpa 2 had the unenviable task of at least matching that level of hype and expectations. Fortunately, Danganronpa 2 does a great job of subverting fans’ expectations and taking the story to unexpected places, even if it does get off to a rather slow beginning. The game is hilariously self-aware, and even takes the time to poke fun at its own story and its predecessor. While Danganronpa 2 does have the tendency to go a little overboard with its crazy shenanigans, the game always knows when to pull back and dial it down a little to preserve the grim mood of despair.

The characters in Goodbye Despair are as wacky as ever, each with their own loud and unique personality to add even more color to the game. You’ve got the Ultimate Breeder who walks around with hamsters in his scarf, the Ultimate Princess who reveals herself to be an unabashed fan of J-Dramas and serial killer movies, and – my favorite – the Ultimate Traditional Dancer, the tiniest and cutest little girl with an extremely foul mouth and mean attitude. 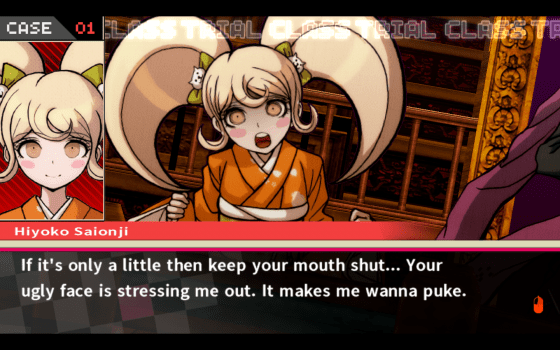 The smaller they are, the meaner they get?

Make no mistake; Danganronpa 2: Goodbye Despair isn’t for kids, and it was rated M for a reason. It’s rife with crude humor, explicit language, and enough sexual jibes to make you uncomfortable while playing this around others. As great as its story is, it must be said that Danganronpa 2 seems to take pleasure in putting its female characters in compromising positions, deriving comedy from their plights and misfortunes. This happens even more frequently here than in Trigger Happy Havoc and, more often than not, it feels more cringe-worthy and pervy than humorous.

Still, aside from bits and pieces of the game’s questionable taste in humor, the overall plot remains just as engaging as ever. Goodbye Despair is a direct sequel to Trigger Happy Havoc, and fans will see some plot similarities and parallels here and there, but rest assured that this installment will still have plenty of surprises in store for you.

The class trials and their solutions are a lot more complex too; unlike in Trigger Happy Havoc, it’s surprisingly difficult to come up with suspects each time a murder occurs, and forging your way to the ever hopeful conclusion is more challenging than ever. If you thought the cases in Trigger Happy Havoc were far too easy and straightforward, the new trials in Goodbye Despair will force you to pore over every single piece of evidence to come up with the right conclusions. However, trial mini games also make a return, and they’re even worse than before. 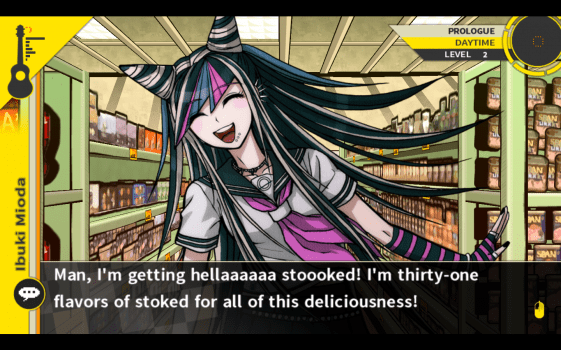 Ibuki is basically the happier anime version of Chloe Price.

New to Danganronpa 2 are the Rebuttal Showdown and Logic Dive mini games. The Rebuttal Showdown, in particular, was confusing enough even in the Vita version of the game, and the game still doesn’t do a great job of explaining what lines exactly you should be ‘cutting’ through. I will admit that the ‘cutting’ controls are a little more user-friendly on PC, but the directions for actually passing this mini game are still a tad unclear, though you’ll get used to them over time.

As was the case with the PC port of Trigger Happy Havoc, the keyboard and mouse controls for Goodbye Despair’s trials and user interface just aren’t as intuitive as with a controller. I highly recommend plugging in a gamepad to play through it, as you’ll likely have a much easier time getting through the mini games, especially when it comes to the Panic Talk Action and Rebuttal Showdown segments. Mini games can be a nice diversion from clicking through text in a visual novel, and Trigger Happy Havoc did a decent job of balancing the two. However, Goodbye Despair falls short by introducing even more tiresome mini games, which honestly don’t even add to the story. Shooting down arguments with Truth Bullets can be fun, but having to play snowboarding mini games, which get tougher and tougher with each trial, seems a tad silly and pointless.

Thankfully though, the soundtrack is killer. The crazy trance music is back in Danganronpa 2 and it never fails to build up excitement during each bloody class trial. While the overall story starts to get a little loopy and incoherent in the game’s final act, you can count on its soundtrack and characters to see you through to the end. The English voice acting is on point too; Hajime and Nagito are the standouts in this entry, which is great, considering that they have the most screen time.

Overall, Danganronpa 2’s PC port is competent, though the user interface suffers a little if you’re using a keyboard and mouse. Despite having a couple of lackluster plot points and devices, Danganronpa 2 is a worthy successor to the trippy story of Trigger Happy Havoc, and I’d highly recommend picking this one up if you’ve already played, and enjoyed, the first game.