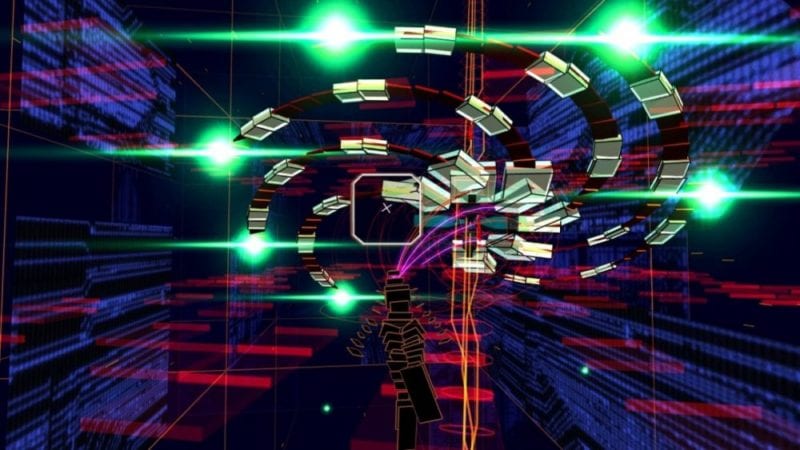 If you were gaming back when the PS2 was still the biggest thing around and the Dreamcast was still shining, you may be familiar with a little title called Rez. In Rez, players flow down a digital path, attacking viruses in order to reboot a computer system and create some music. It was a relatively simple concept that proved to be engaging while at the same time oddly relaxing. Rez Infinite seeks to bring that same feeling to VR, but I’m not so sure if that will work out for the best.

Rez Infinite uses a DualShock 4, not the move controllers, so if you remember how to play the old one, you’ll fit right in. If you’ve never even heard of the game, the controls are still simple enough where you’ll get the hang of it within a minute or so. Since it plays with a controller, the whole presence of the PSVR seemed oddly out of place.

Rez Infinite is a third-person game, so the out of body experience makes matters a bit weird. Controlling your avatar onscreen is sort of detached. You can look around the area in VR, but it’s akin to looking around in a rounded television. You just aren’t in the game. The visuals are nice, though, so seeing the neon lights and bright explosions as you glance around is pretty cool. But it’s all just out of place.

Things become increasingly weird when you go to control the game. No matter what, you will need the DualShock 4 to both move your avatar and shoot. Aiming, however, can be done by looking at your target or using the right thumbstick on the controller. This is where the problems began.

I would look around to aim, but since the game isn’t your typical VR experience, there was no ignoring the controller in my hands. Hitting the right thumbstick would switch my aiming in Rez Infinite to classic controller mode. It caused a disjoint between two different actions, making the whole experience a bit awkward.

This may be due to the PSVR integration being optional. Games built from the ground up as virtual reality experiences are able to immerse you in their worlds quite differently from something like your typical game. Making something that is a sort of hybrid requires it to work both ways, meaning it can never fully exist in VR.

Playing it was fun, as I’ve always been a fan of Rez, but it didn’t feel like it was the right fit for a returning classic. Of course, the game is still under development, so there is always the possibility for more VR integration, maybe even with the Move controllers. Unfortunately, as it stands right now, it feels much more as if the amazing tech has been tacked on to a classic’s resurgence.

Hopefully it gets worked out to where Rez Infinite’s amazing music, and beautiful digital visuals can be fully appreciated in the VR space. But, for now at least, you’re just playing Rez with an expensive piece of hardware on your head.