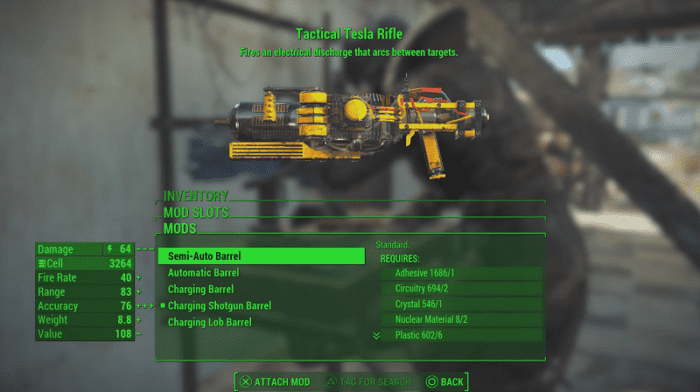 Leading up to the release of Automatron for Fallout 4, the developers showed off a powerful weapon a few times. This weapon fired huge bolts of electricity that could chain between enemies, making it the perfect gun for dealing with hordes of robots and anything else. That weapon is the Tesla Rifle, and you’ll have to go up against a tough foe to obtain it.

First things first, you’ll need to unlock the Headhunting quest. This becomes available after clearing both the Mechanical Menace and New Threat questlines. Headhunting will send you into a satellite array where you’ll have to deal with a whole bunch of Rust Devils (the new enemy faction in the Automatron expansion). Follow your mission markers until you find Jezebel and are able to fight Ahab.

After doing so, you will want to explore a bit. Follow the designated path until you discover a bridge covered in mines that leads to a room with a character named Ivey in it. This is a Dust Devil who wears a powerful suit of…well, Power Armor. She’ll be guarded by a powerful Automatron of her own, so be careful, and bring your best damage dealing weapons.

After defeating her, loot her body to discover the Tesla T-60 arms and torso which increase your Energy Damage. She’ll also drop the Tesla Rifle. A very powerful and extraordinarily useful weapon. You’ll be able to wreak havoc upon your adversaries without missing a beat.

What makes this weapon even more desirable are the ton of mods that can be applied to make it better suit your play style. So go nuts and become the Thor of the Commonwealth.