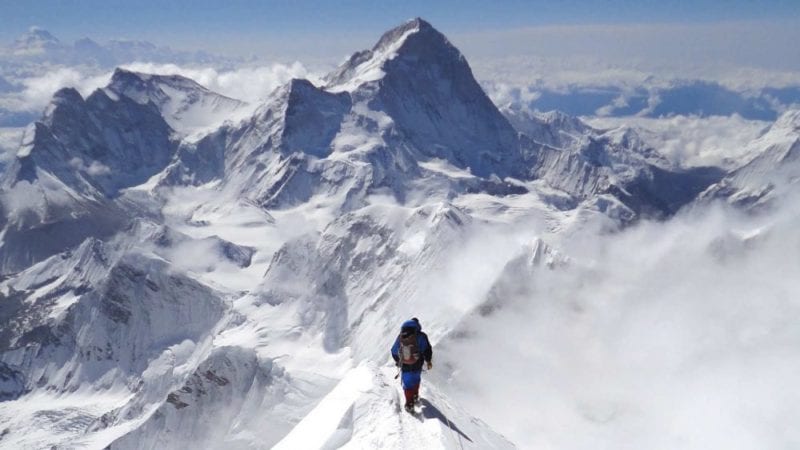 Standing at the precipice of a mountain peak, it’s hard not to feel a bit light headed as the wind gusts by and you can see an approaching snow storm. I slowly inch my way forward, being careful not to slip off of the edge. Reaching for clamps to secure my place on the mountain’s side, I made my way ever higher. This was all being done through the HTC Vive, and this was the Everest VR tech demo.

The headset was placed on my head and was a bit heavy on the front end, but I did eventually get used to it. After a short adjustment, the demo began and the blackness gave way to a snowy landscape as I found myself floating over the peaks of Everest.

This sudden change of location was uncomfortable at first. Everything was blurry as the mountain slowly came into focus. It was dizzying, and I struggled to find my bearings. Mt. Everest’s sudden appearance was jarring, leading to a slight loss of balance. However once the demo corrected itself, it was no longer an issue. That hiccup aside, what followed was an intense example of how the HTC Vive places players into a new world so seamlessly.

For the hands on demo, I was set up in a small square room with only a few feet to move in all directions and a team member guiding me to make sure I didn’t embarrass myself. It was good that she was there, because once things got going, it was impossible to remember that I was standing safely in a room. I was on Mount Everest, and there was nothing you could say that could convince me otherwise.

These demos exist to show the true power of virtual reality, and Everest VR succeeded with flying colors. Sound design, depth, graphics, and the sense of impending doom as I slowly moved near my next objective. Yes, I was aware that I was standing in a small room, but my mind just couldn’t get over the fact that I was looking over a cliff and that one small misstep would lead to unavoidable doom. That is what VR is supposed to do. It’s supposed to remove you from the world you know, and put you in a new one that’s easy to believe is real.

That’s exactly what Everest VR does, it introduces real life rules that you can just thrust yourself into without fail. Walking on a cliff is terrifying, this is universal, so you immediately find yourself moving carefully. Reaching for your climbing gear, rather than just pointing and clicking, is far more immersive and real. It’s easy to do these things because they aren’t so out of this world, and that’s what makes them work so well.

There is nothing wrong with high fantasy or science fiction, but there is a certain detachment that comes with their territory. Being able to super jump removes a lot of the fear that comes with being in a new world, having unstoppable power does the same thing. But Everest just placed me, as the human that I am, into this realm where only my caution would help me.

There was a bit of concern about being a bit too immersed. After all, the demo required me to move about a closed area, running the risk of bumping into some decidedly solid walls. It’s a good thing that the HTC Vive didn’t completely forego my real life safety while throwing me into its virtual reality. Sensors on the headset respond to the proximity of obstacles. As I moved closer to the walls, the mountains developed faint grid-lines in order to illustrate where my very real, very solid world was meeting up with my mountain adventure. It’s a welcome, and necessary, feature that quickly reassured me just when I had started to fear that I was going to run face first into a wall.

Going into the demo, it was hard to nail down expectations. But, after having walked above the clouds, its clear to see just how special VR truly is. The HTC Vive managed to change the world I was standing in, even if it was only for a few minutes. After removing the headset, I just couldn’t shake the unease of almost losing my life thousands of miles from home. For those moments, it was real.

It won’t be long before the average consumer can experience for the first time how VR can actually take players out of their world completely. Today it’s standing on mountains, but there is no telling what tomorrow may hold.