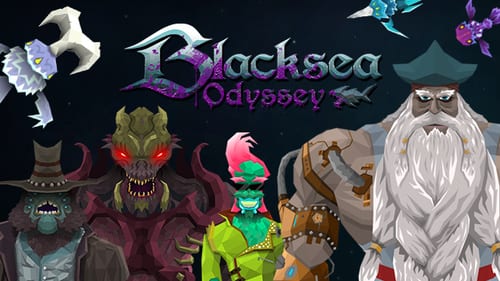 One of the greatest things about games as a medium is the ability to discover frontiers that, quite frankly, don’t have a fit anywhere else. I’m not sure there’s any other way we’d ever explore Blacksea Odyssey’s unique world of competitive deep-space spearfishing. I’m not sure it sounds like a concept that really needed exploring, but after spending some time in the game’s world, I can attest that it’s a much more solid foundation than you might expect.

Blacksea Odyssey has more going for it than just its bizarre world, though. Blending together a twin-stick shooter and roguelike RPG, it puts together a fantastic playing experience that’s remarkably well-assembled. A solid core of responsive controls, random maps, and brutal combat flesh out a harsh yet deeply intriguing world, pitting players against the competition in a one-of-a-kind monster slaying arena where only the strong survive and the merciless thrive.

Each of Blacksea Odyssey’s six rounds begin with players choosing one of the available target beasts. These enormous and incredibly lethal creatures aren’t the only life that populate the starry seas, but they’re the only ones that matter. While hunting the smaller game can help you gather upgrades, gold, and consumable items, tracking down and killing your selected prey is the only road to victory — assuming you can survive.

Blacksea Odyssey makes the hunt something that’s not only difficult, but a ton of fun. Soaring around the map on what I can only describe as a rocket-powered space kayak, our intrepid hunters come armed with surprisingly simple weapons. Thrown spears are your primary means of taking out the smaller beasts, as well as weakening the larger ones. Once they’re softened up with those, players can rip limbs, fins, and other bits from the creatures using a harpoon attached to their craft by a hefty chain.

In addition to its interesting concept and brutal combat, Blacksea Odyssey keeps things fresh with its randomly-generated maps and upgrades. This turns out to be a great thing not only because it opens up some wonderful replay value, but also because death is permanent. Especially early on, players will likely find themselves frequently on the wrong end of a set of razor-sharp teeth or poisonous barbs, so there’s good reason to appreciate the variety that the game offers.

It’s tough for me to find anything bad to say about Blacksea Odyssey. Sure, the graphics may feel a bit dated, but they’re not so bad as to detract from the experience. The difficulty takes some getting used to, but doesn’t feel insurmountable. The combat is top-notch fun, and ripping apart gigantic space fish is as enjoyable as it sounds. The concept of spearfishing in space may be an odd one, but it’s very well executed and devilishly fun.

All told, Blacksea Odyssey is a bizarre and wonderful game. The huge enemies, random maps, and plentiful powerups make every outing a fresh and dangerous trip into the star-filled sky. It’s enormously fun, even in the current early access stage. If you’ve got a hankering for hunting deadly space fish, you can pick the game up for a reasonable $9.99 on Steam.