The first-person shooter genre is incredibly popular and saturated, and yet in spite of this, SUPERHOT has come along and done something incredibly unique. It may not have the flashy graphics or massive weapon variety that many AAA shooters have, but it should still pique the interest of FPS and even puzzle fans.

SUPERHOT is a first-person shooter first and foremost, but it does have a neat gameplay mechanic that shifts the game into puzzle territory. In SUPERHOT, time only moves when you do. This means that when you drop into one of the game’s levels, if you stay still, the enemies around you, bullets, and other objects will also remain still. If you move very slowly, time will also move slowly. However, move as you normally would in any other game, and you’ll find things will be moving a little too quick for you to keep tabs on it all.

In each of these monochrome levels you’ll find a number of crystallized red enemies that must be eliminated before they take you down with one hit. You can use a small selection of weapons which include guns, objects, and your fists to take enemies down. 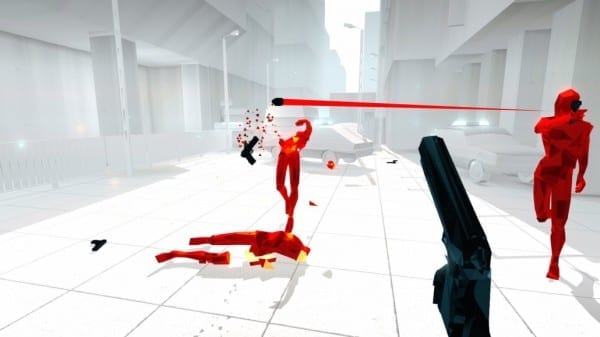 Because everything is easier to take in when it’s slowed down, SUPERHOT rewards slower tactical play over running in guns blazing. For example, there may be five enemies left between you and victory, but the amount of ammo in your possession, incoming projectiles, your surroundings, and your positioning will all contribute in your chance of survival and how you intend to tackle the level. So you may fire a couple of shots, throw your now empty weapon at a nearby enemy to disarm and stun them, steal their weapon, while dodging incoming bullets with some precision evasion and a little bit of help from the time mechanic. However, if you’re not conscious of your surroundings you could back yourself into a corner or a dead-end, making survival that much more difficult.

By implementing such a unique gameplay mechanic that requires lots of logical thinking, SUPERHOT differentiates itself from other FPS games, and becomes a standout example of how to make a tried and tested formula a lot more interesting.

While the 32 levels on offer in SUPERHOT are going to be the main focus during your time with the game, there is a story that links them all together. You’re just an average guy who one day logs onto an online chat room called Guruchat. While in Guruchat, you meet a person who tells you about an executable file that allows you to hack into some mysterious group’s servers and play a game, SUPERHOT.

That mysterious group, unhappy you hacked into their game, starts contacting you and warning you of the consequences of your actions. It gets creepy at times, and is interesting enough, but it isn’t all that important to enjoying SUPERHOT. However, it did leave me with a slight phobia of unknown .exe files.

SUPERHOT’s difficulty escalates throughout the course of the game with each passing scenario requiring players to think more carefully about what weapon to use, and how to use the time mechanic to their advantage. For the most part, when I failed it was my own fault, and I was happy to give it another go. SUPERHOT’s incredibly compelling gameplay will have you muttering ‘one more go’ when you inevitably get taken down.

However, on a small number of occasions there seemed to be hit detection problems, especially when it came to head shots. Head shots didn’t seem to register and eventually I had to change up where I aimed at enemies. It happened enough times to become frustrating, and that tarnished my experience somewhat. If this is a bug, then hopefully the developers will be able to fix this up in a post-launch patch.

Visually, SUPERHOT isn’t groundbreaking, but it does have its moments. There’s nothing quite like standing in the middle of a room with bullets frozen in time just about to whistle past your face, and stopping to notice the red shards of dead enemies and fragments of broken windows shattering across the floor. These moments of simple beauty are a treat to enjoy amidst all of the chaos slowly unfolding around you. 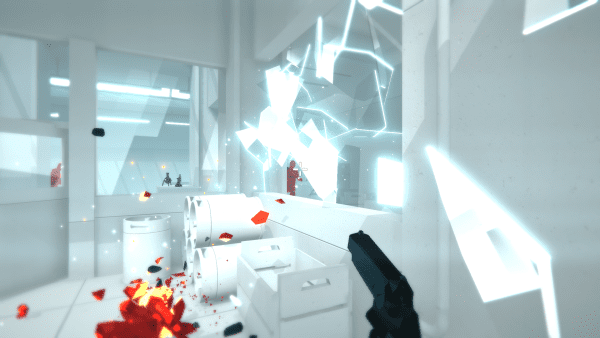 In total, the game’s story mode totaled about two and a half hours. The 32 missions available ranged from tutorial missions to much more difficult levels that will test all you have learned. Once all the levels were complete and the story was all wrapped up, the game unlocks Endless Mode and Challenge Mode which provide welcome means of passing away additional hours if you’re looking for more.

Endless Mode hurls waves of bad guys at you until they finally manage to land a hit and take you down. If you’re into high-score chasing, then Endless Mode will probably keep you entertained for quite a while. Challenge mode, on the other hand, tasks players with completing the missions from the Story mode with slight twists. For example, one challenge asks players to complete the entire game using only a katana sword and their fists. Both of these post-Story game modes were welcome additions, however, I couldn’t help but feel I wanted more of just the standard levels.

SUPERHOT is a game with an amazing gameplay mechanic (time), that is also bolstered by an unusual but interesting plot and equally curious art style. Unfortunately, hit detection issues compounded with SUPERHOT’s short-lived Story mode meant that once I’d given the additional modes a try, I was quite happy to put SUPERHOT down and move on. Despite these issues, it’s still worth a trip through to experience its fantastic twist on both the FPS and puzzle genres.