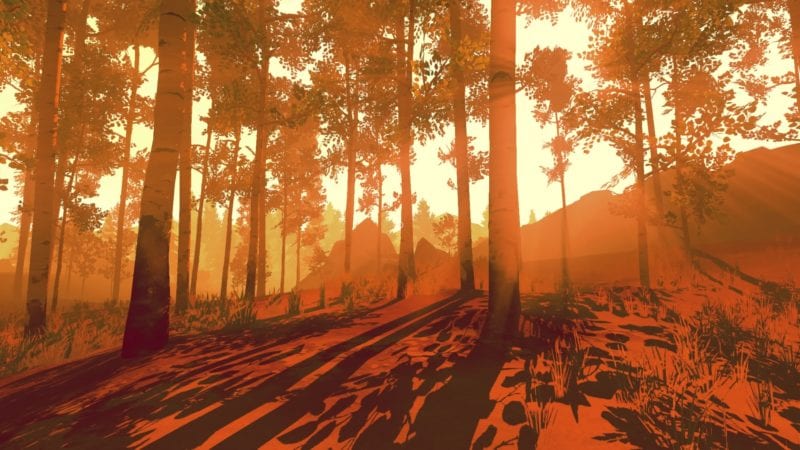 Firewatch doesn’t have any dazzling gameplay mechanics. There are no fancy guns, no bad-ass cutscenes, and no groundbreaking AI by your side to keep you company, yet I came away from Firewatch caring more about its characters and their backstories than in any other game I’ve played in quite a while.

The game puts players in the role of Henry, a man who has retreated from his messy life to become a member of the fire-watch in the Wyoming wilderness. Set in the scorching summer of 1989, the abnormal heat has led to growing concerns over the possibility of a fire breaking out in the dense forests and lush environment of the uninhabited great outdoors of Wyoming. That’s where you come in.

As Henry, you reside in your watchtower, keeping an eye out for any smoke or other suspicious activities that may lead to some troubles and investigating any unusual happenings. Even from the beginning, Firewatch is telling a story that provides so much reasoning for why Henry went out into the wilderness in the first place.

When you first start playing Firewatch, without going into too many spoilers, you’ll uncover the backstory of our protagonist through a number of branching dialogue choices. From this very point, it was clear that the game wasn’t going to hold back any punches with its story. What could have been an empty shell of a protagonist, just used as a method of putting the player into the world, became a fully realized human. One who’s motives for accepting this voluntary role suddenly become perfectly clear. It’s not something he necessarily always dreamt of doing, but instead a way to escape from his past and the decisions that have led him to this point. I cared about Henry from the offset, and throughout my five-hour journey, I only wanted to see him finally relieved of his troubles.

During the 90-day period that the events of Firewatch take place over, you’ll actually only really see a small handful of these. Some days flash by in a matter of minutes and only five of them really see the player participating in anything really notable. Firewatch’s story all kicks off on your first day on the job when Delilah, your supervisor and the voice on the other end of your two-way radio, draws your attention to fireworks going off in the distance and sets you out to go and investigate the source and tell off the culprits.

Through assuming this role as Henry’s supervisor, Delilah can be contacted about quite literally anything slightly out of the ordinary on your adventure. It’s during these conversations that Firewatch really shines. Once you’ve dealt with the culprits of the fireworks in whatever way you see fit, the story takes a much darker path and will have Henry covering almost the entirety of the map searching for clues, and seeking out the truth.

The dialogue between the two is engaging and, combined with excellent voice acting, Henry and Delilah feel like real people. The chemistry between them is near-perfect. Just like in real life, the awkwardness of their first conversation slowly melts away over time until the characters are joking and chatting away like two age-old best friends. It’s a credit to Campo Santo that its managed to make the blossoming relationship between its two characters feel so natural which ultimately adds an extra layer of depth to the experience.

It’s on your venture to go and do this seemingly menial first task that you get to truly take in the beauty of this forest and its surroundings for the first time. The lush greens of the forest are dispersed with intermittent flashes of bold yellow and red sunlight piercing through the canopy of leaves, providing for a spectacle that leaves you staring in sheer admiration of the art style, compliments of illustrator Olly Moss. Each day has a day-night cycle which allows visuals to remain fresh and provides for a wide variety of scenery to take in. In the morning, summer mist lingers above the surface of the ground, at noon the sunlight bursts through the cover of trees, and come twilight, the sky is filled with the bleeding red of the sunset.

The game puts a heavy emphasis on the largely untouched environment and an unnerving atmosphere that comes with being alone in a world that’s only inhabitants are non-human. Even though you wander through tranquil meadows and peaceful, lush forests, it’s difficult to shake the feeling of discomfort that comes with the constant presence of arising complications. Firewatch implores you to take in its surroundings, become fully immersed in its world, and truly take on the role of protagonist Henry through the different dialogue options available to you.

Unfortunately, the game struggled to keep me immersed in its world, not because it didn’t have an engaging story or a line was delivered in a jarring way, but through technical hitches that became more of a nuisance the more they happened. On numerous occasions, the framerate visibly dropped and led to a slow, jerky camera. While not enough to massively tarnish my experience with Firewatch, it was enough to pull me out of the world I frequently found myself getting lost in. Campo Santo has stated it aims to resolve the technical issues (which only seem to be an issue on the PlayStation 4 version), but until then be prepared for a sometimes jerky wander through the woods.

Saying much more than we already have on the story wouldn’t allow you to truly enjoy the experience to be had in Firewatch, and while I thoroughly enjoyed its story, I was left wanting when it came to the conclusion of my adventure with Henry and Delilah. What had been built up and crafted into an incredibly atmospheric and dark story within this otherwise vibrant environment couldn’t quite carry its momentum all the way to the end. It’s unfortunate that arguably Firewatch’s main feature stumbles in its closing act and misses out on being a classic, but it still provides an enjoyable experience over the five hours it takes to reach the end.

Campo Santo should be applauded for what its done with Firewatch. The game is an artistic masterpiece and gives further evidence that this medium can deliver beautiful and unique experiences. Though Firewatch hiccuped and jerked its way to a rather flat ending, I’d recommend it all-the-same to anyone who just wants to get lost and explore a beautiful environment, meet a great cast of characters, and escape from the real world for a few hours.