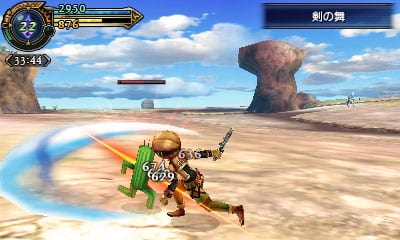 The Thief job in Final Fantasy Explorers excels in superior mobility and accuracy. As a Thief, you’ll also have access to the Steal and Cleareyes abilities, both of which allow you to absorb materials from enemies and the environment, thus making this the perfect job for anyone looking to scavenge items.

You also get to choose between dagger and spear skills. I highly recommend that you go with daggers, even if the damage output isn’t as high as a spear’s. This is because the dagger skills are much faster and more accurate than the spear ones. Considering that the Thief isn’t as tanky as the other jobs, the dagger skills might be more ideal as the usage of spears will leave you with very little room for error. The offensive abilities that you’re going to want to get include Greased Lightning, Trickster, Sneak Attack, Wall, and Mistral.

First up, Greased Lightning should be the first ability you use before entering any fight. This ability allows you to reduce your AP cost while sprinting – an invaluable skill, considering that you’re going to have to run around a lot to evade attacks.

Trickster is a great offensive ability that allows you to attack your foes before jumping backwards. It’s a great way to go in for quick hits and create distance between you and your foes at the same time.

Wall is also a good ability to have. Instead of allowing you to jump backwards, Wall creates a barrier between you and your foes, nullifying some of their attacks. These two abilities should be the ones you use most often, as they’ll keep your defense up while also allowing you to get some hits in.

If you want to use a spear with your Thief instead, I highly recommend getting the Splash and Moulin Rouge abilities. Splash is a physical attack that sends out a shockwave as your Thief leaps backwards, similar to the back leap that comes with Trickster. The Moulin Rouge ability clads your Thief in fire as he or she performs a spinning attack. The spear abilities are largely more powerful than the dagger ones, but these two in particular will give you some sort of defensive measure, so be sure to grab them first.

For more tips and tricks to help get you through, be sure to check out our Final Fantasy Explorers Wiki page!