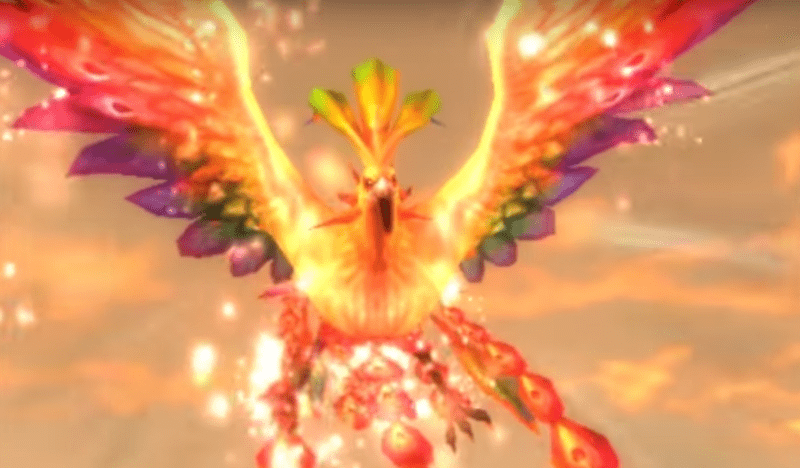 Phoenix is one of the eidolons you’ll get to fight in Final Fantasy Explorers. He isn’t exactly a tough foe, but he’s definitely one of the more annoying eidolons you’ll face at this point in the game. As usual, I advise bringing along a party of three monsters to help deal damage during this fight. You should already have access to Trance Mode as well, so it certainly wouldn’t hurt to bring along any magicite of your choosing.

Phoenix is an annoying fight simply because he’s always going to be in the air, meaning he’s not going to be an easy target to hit. In fact, this might be one fight where not locking on would make things a little easier on you. By keeping the camera free, you’ll be able to direct your attacks more easily as the target lock might cause some of your attacks to miss, since Phoenix is constantly moving about. This is especially true if you’re using a weapon with a narrow hit box, like a spear.

When he’s in the air, Phoenix can perform a Sweep attack that damages anything in front of him. For this fight, you should try to stay near his tail as much as possible to avoid the bulk of his attacks. You can also deal damage by hitting his tail or the back end of his body. Occasionally, he will use his Gust of Wind attack, knocking down anything that happens to be standing below him. Even if you’re standing underneath his tail, it’s likely that you’ll still get hit by the attack and there’s no easy way to avoid it, aside from simply dashing away from him as he prepares to strike. Thankfully, this particular attack isn’t too powerful, so if you have enough HP to tank it, it might be more worth your while to endure the attack in exchange for landing more hits on him.

Phoenix will also fly away from you and use an attack called Balls of Flame. When he does this, your best bet is to dash around to the side of him. The fireballs do not have very good tracking, so you should be able to dodge the balls if you run to his side. Phoenix also has a Glide Attack where he will try to swoop in to you from afar. Whenever he creates distance between himself and you, be sure to lock onto him so you can see when he’s about to use the Glide Attack. His most dangerous attack occurs when he flies up and starts raining fireballs at your from above. Similarly to Ifrit’s Hellfire attack, this move is best avoided by running in circles around the arena.

Lastly, do note that once you take Phoenix down to just a sliver of his health, he will attempt to use a Rebirth skill where he regenerates all of his HP. When he falls to the ground and starts glowing brightly, that’s your cue to start wailing on him before he gets the chance to restore his health. It’s a good idea to save your Trance Mode for this part of the fight so you can use all of your abilities to take him down before he gets a chance to heal.

For more tips and tricks for Final Fantasy Explorers, be sure to check out our Wiki page.