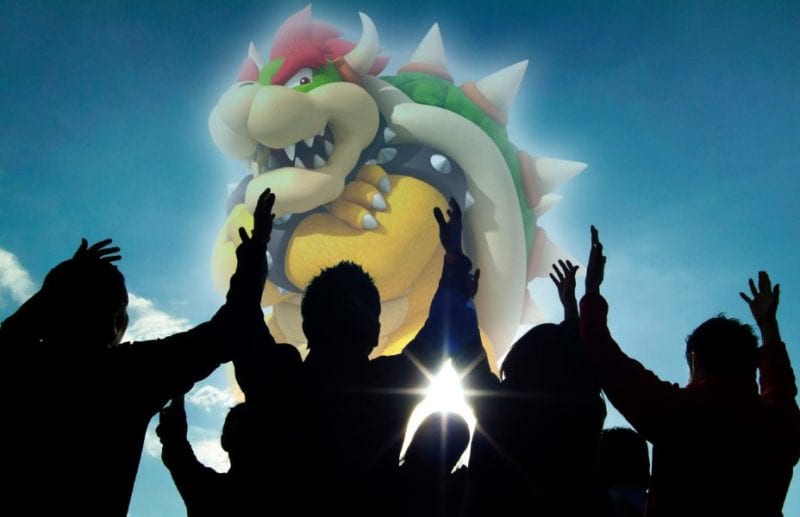 Everyone knows how the Super Mario story goes: Bowser kidnaps Princess Peach, Mario is pissed, Mario defeats Bowser, Mario saves Princess Peach, Pauline spreads rumors about Mario to get back at him for ditching her for Peach. With each game, the cycle continues, and, as such, we always see Bowser as the bad guy, but who’s to say that’s what’s really happening? Now, I am prepared to make a case for Bowser; as the usual final boss, he typically has no one else to back him up, but that ends now. When you really look at it, Bowser is a whole lot more misunderstood than we bother to realize.

As many of us will know, Bowser has power. Well, he must have power if he has the money and resources to have ominous, hulking castles constantly sprouting all over the Mushroom Kingdom like weeds. Now, access to the Mushroom Kingdom’s financial data is hard to obtain, partly because it doesn’t exist, but I am almost certain that unemployment rates plummet whenever Bowser makes a big return to the land. Simply put, Bowser creates jobs.

“You have to understand, Mario; we can’t go back to stripping.”

Who hires the Dry Bones to walk about, patrolling the castle? Who employs the Koopa Troopas to provide aerial surveillance of the land? Who pays the Goombas to scuttle about aimlessly? Bowser does. The King Koopa provides employment opportunities for so many of the Mushroom Kingdom’s inhabitants, only to see them be killed in cold blood at the hands of Mario, a supposed plumber who hasn’t even plumbed in over 30 years.

Let’s take a look at Mario and Luigi, and their sorry excuse for a plumbing business. With so few humans in the Mushroom Kingdom, Mario, Luigi, and Peach are likely some of the only citizens with working digestive tracts. With this in mind, it’s clear that a plumbing business would hardly be profitable here. No pooping, no business.

Pictured: A severe lack of a toilet.

Mario and Luigi are the true crooks here. If they’re not making a dime by plumbing, then the only logical answer is that their business is used for money laundering. The fact is, though, they are the underbelly of this seemingly peaceful and wholesome society. The Mario Bros. are a plague on the Mushroom Kingdom, and no one is brave enough to confront them but our knight in shining armor, Bowser.

At this point, the next biggest query in the air is the moral dilemma of kidnapping Princess Peach. Let’s be real here, the deeds she has done for her kingdom are few, if any. She only hires several Toads at a time to do her personal bidding, and this is with the assumption that they even get paid at all, but that’s another story entirely. One could assume that Princess Peach cares deeply for the Toads, never putting them in harm’s way, but there is strong evidence that proves otherwise:

Kidnapping the Princess is Bowser’s ultimate favor to Toads everywhere, as she can no longer hurt them when she’s captive. Clearly, the “happy” Toads serving Peach are suffering from a severe case of Stockholm Syndrome. No one in the land dares to admit it, but she’s the monster here.

Admittedly, Super Mario 3D World does bring up one other big question: For what purpose does Bowser kidnap all of those little Sprixie Princesses? Easy. They’re tacky.

Bowser is for the people, or whatever you would call all the creatures of the Mushroom Kingdom. If you saw injustices being wrought, wouldn’t you want to put an end to it all? Bowser’s objective is exactly that: justice. Maybe it’s the spiky leather straps he wears that intimidate people more than they ought to, or maybe he’s just a leather daddy. A leather daddy seeking justice for the world.

Okay, I know all this sounds insane, and it is, but that’s beside the point. Perhaps this is just another great lesson in judging a book by its cover. This could all be an exercise in looking a little deeper at someone before going off of what everyone else has to say. Yeah, Bowser is always referred to as the bad guy, but is he really? Okay, he’s a little conceited, placing his face on amusement park rides, trains, castles, ships, everything, but he has every right to love himself. We should all want to be like Bowser. He does a lot of good for the world. He does way more good than he gets credit for. Simply put, Beyoncé isn’t the only Queen B.