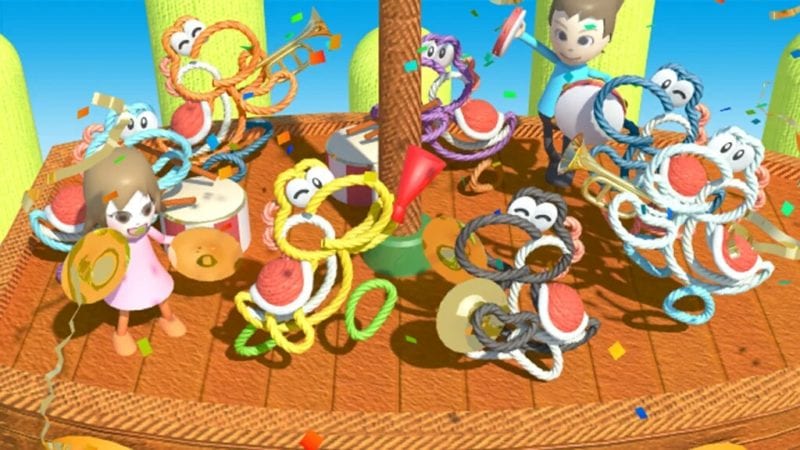 Much of world is familiar with Yoshi, the adorable green dinosaur that accompanies Mario on his many dangerous and thankless adventures. Many may also know Yoshi has his own series of games involving different kinds of Yoshis working together. Yoshi’s Island was the first of these titles, and Yoshi’s Woolly World is the latest in the series of undying cuteness.

What many may not be aware of, though, is that Yoshi’s Woolly World looked very different at the start of its development. The first image we ever got of the game appeared in a Nintendo Direct, and it didn’t look too off from the final product. One dataminer, however, found files within the game that show something very different.

Within the early stages of the game, Yoshi’s Woolly World took on a more two-dimensional look, as opposed to the 2.5-D format used in the first official image and final product. In fact, Woolly World very closely resembled a previous game of Nintendo’s called Kirby Epic Yarn.

The big similarity between the two is the aesthetic of everything being made of crafts supplies. It may be the developers at Nintendo realized it wasn’t worth making a game that looked so alike to a previous game, and they ditched the original idea, opting for what we have now. All was well.

Yoshi was still very cute as an outline of yarn, but his new woven, stuffed look is just perfectly adorable. Additionally, the world itself now looks much more engaging and fresh than the flattened plane they initially created. The gameplay also seems to have undergone some changes as well.

The image above may suggest that, at one point, motion control would be a major factor in the gameplay for Yoshi’s Woolly World. This picture seems to depict instructions for the player to shake the Wii Remote for some reason. It could be to toss those enemies, to shake the curtain Yoshi is climbing, or to climb the curtain itself; the image is a little unclear. Nevertheless, none of these features are present in the final product, and that’s probably a good thing.

This image above may suggest that Yoshi could give Mii characters rides. Why? I don’t know, but it’s cute.

Perhaps the Miis were going to work like Baby Mario in the original Yoshi’s Island, where he must be protected and various Yoshis may be used at times with their own unique abilities. Whatever the purpose of Miis were, though, they wound up being stand-ins for other players, simply shouting out their Miiverse post when approached.

The original Stage Clear screen is perfect, though. The world mourns the loss of this:

The current Woolly World is now one that oozes comfort, making you just want to jump on in there, roll around in everything, fall asleep, wake up two hours later all groggy and cranky, and then feel better when you realize there are Yoshis here, being cute, doing Yoshi things. If you tell me you wouldn’t want that, you’re a liar. If you want to lie, that’s fine with me, but is that fine with you?

I digress. Regardless, stuff like this is such a treat, allowing us a small, but deeper, look into what the development process entails. This is the framework being laid out, this is the skeleton being put together, making what will eventually be that living, breathing experience so many people can get lost in. Files like these show the building blocks of what will continue to fuel the imagination for years to come, and that’s a beautiful thing.

What do you think of Woolly World’s changes? Feel free to share in the comments below.