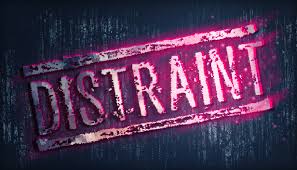 One of the things that always amazes me about the indie games scene is how much can be done by small groups, or even by a single person. Distraint, the latest from Silence of the Sleep creator Jesse Makkonen, is not just one person’s labor of love, but one that was put together in a mere three months’ time. That said, I’ll admit I had some reservations going in knowing some of these details.

Distraint is a psychological horror adventure game following a man named Price, whose story is one of regrets following his pursuit of wealth and a partnership at a powerful law firm. Players will control Price as he makes his way through the eviction of three persons, each of whom has their own story to tell along the way. As he progresses through these jobs, Price begins to feel the weight of guilt over his actions, but still proceeds to complete each task in turn.

What makes Distraint fall into the horror genre is a mixture of several elements. The focus on humanity, greed, and morality tells a tale that many may find familiar. Of course, a gripping struggle with emotional weight isn’t enough to be scary alone, and Distraint pairs it with a surreal and occasionally disturbing world. As Price goes about his business, the things he witnesses and the dreams that haunt him grow darker and more macabre.

While Distraint’s focus is on the horrifying reality of going about Price’s given tasks, the creeping dread and darkly violent visions that accompany his struggle certainly drive the themes home. A blood red rainfall, a hound gnawing at an unidentifiable corpse, and hollow-eyed apparitions are just some of the things players will encounter as they make their way through the story.

Despite these grim and often bloody displays, Distraint doesn’t really throw much at you in the way of jump scares. Instead, it offers that festering kind of morbidity that piques your curiosity and draws you further into Price’s own descent into madness. While playing, I found myself wondering what dark secret could be hidden behind the next doorway, and wondering what turn of events awaited me as I solved the game’s many puzzles to continue onward.

As I said, knowing that Distraint was one man’s creation over a three-month development gave me some reservations. Having completed the story, though, I can happily say these were entirely shattered. While the aesthetic is relatively simple, the atmosphere throughout is wonderful, and only improved by the game’s excellent sound design. While it’s relatively short, the story is well-crafted, and the entire experience is one that I thoroughly enjoyed.

If you’re looking for a great way to kill a few hours with a story-focused psychological horror, you could certainly do worse than Distraint. The $4.99 price on Steam is absolutely perfect for the play time and all-around design, and while some areas begin to feel a bit repetitive when back-and-forth wandering is needed to move beyond a puzzle, this one still gets a hearty recommendation from me.