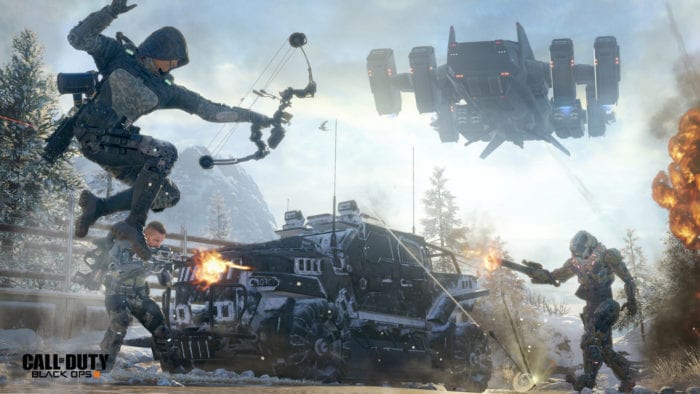 It’s currently Twinfinite’s Game of the Year week! All week long, our Editors and Writers will be nominating games from this year that stood out in 2015. Today, Managing Editor Ed McGlone tells us why Call of Duty: Black Ops III is worthy of being Twinfinite’s 2015 Game of the Year.

Call of Duty is one of the most polarizing game franchises of all time. There are probably many people who hate the annual franchise that are rolling their eyes at the thought of Black Ops III being a GOTY nominee right now. After all, isn’t Call of Duty the same thing every year? Fans line up every year in November to get their safe, unchanged, army FPS game. Well, yes and no.

A funny thing has happened since the famous Infinity Ward/Activision battle that took place after the release of Modern Warfare 2. In case you haven’t been playing close attention, there are now three developers that each take turns releasing their product every year (Sledgehammer Games, Treyarch, and the reanimated corpse of Infinity Ward). Treyarch in particular has emerged as the developers that are the most innovative of the three and are the ones behind Black Ops III.

Treyarch isn’t afraid to mix things up, get weird, and are fearless in adding features that many of their audience may not ever fully realize. The result this year? Call of Duty: Black Ops III, in terms of content, is arguably the most content packed shooter on the market right now. There’s so much to do, so much game mode variety that can appeal to all different tastes, and unless you just really hate Call of Duty no matter what, you’d have a hard time not finding something that would entertain you.

There are many that gloss over Call of Duty’s single player campaign, expecting it to be a 5-hour shooting into a hallway simulator. While yes, Black Ops III isn’t open by any means, new features dramatically spice things up. As a futuristic cybernetic solider, you have access to Destiny-like super abilities and expanded movement options such as wall running. Instead blandly shooting at enemies in a room until they all go away and moving on, I felt like a harbinger of death. The rush of just being able to annihilate everything in your path at high speeds is what makes Black Ops III stand out from its predecessors. I never got tired of running across a wall, shooting two or three chumps before I landed, calling in a swarm of nano locusts to infest some more, and then turning around and super punching a couple of robots half way across the room. As much as a prefer a challenge, I’d recommend people play Black Ops III on a difficulty lower than you normally would to get the full effect. If you crank it up to the point where you have to play things safe, then you’ll be reminded of the bland campaigns of yesteryear. Also, Christopher Meloni (Elliot Stabler from Law and Order: SVU) is in the story  and it couldn’t be any more of a perfect casting. I’m surprised it took this long to get him in a game.

There’s action, explosions, betrayals, terrorists, people bossing you around, you know the deal. If you match it up against the story of say The Witcher 3, will you pick Black Ops III over it? Probably not. But it’s the diversity and just sheer amount of content in the game that makes it a Game of the Year Contender.

Part of that diversity is the competitive multiplayer that we’ve all come to know like the back of our hands since Modern Warfare 1. Fundamentally, not that much has changed since CoD 4 all these years later. The reason for that is the same reason the DualShock Controller has stayed relatively static over the years: You don’t fix what isn’t broken. That being said, Black Ops III makes arguably the biggest change in the multiplayer in years by adding true classes, called Specialists. These specialists don’t dominate the gameplay like in other class-based shooters, but instead subtly adds another layer of strategy atop the familiar formula.

If you pick up Call of Duty year after year just for the multiplayer, you’ll find that what you love (gun customization, scorestreaks, prestiges, etc.) are all there. The addition of the futuristic elements such as Specialists and Cybernetic abilities like wall running and power sliding mix up gameplay just enough to feel fresh for both newcomers and loyalists alike. This was a tough task for a game that is annually released, and Treyarch pulled it off.

Zombies in and of itself is nearly an entire game within a game at this point. Beginning as a mini game that you unlocked after beating the World at War campaign, it’s become one of the most popular parts of the Treyarch Call of Duty games. There are, I’m sure, plenty of fringe Call of Duty fans that wait around for the Treyarch games specifically to play their Zombie mode. Black Ops III features yet another amazing Zombies game mode that blends popular features from the older maps (think Pack-A-Punch, for instance) with new buildables and customization options, and of course entirely new characters and locales.

Hell, Zombies even has its own campaign mode called Nightmares now. Serving as an alternate timeline version of the campaign, Black Ops III mashes together the easy to jump into Campaign mode with popular Zombies elements like power-ups and the Mystery Box. It’s a welcomed addition for Zombies veterans that want something familiar, but different to occupy their time, or someone that doesn’t have what it takes to survive long Shadows of Evil, but wants to mow down some undead.

What I’m getting at here is that there is just so much content packed into this $60 package, especially when you start comparing it to other shooters. It’s easy to say Call of Duty is the same thing every year because they don’t dramatically alter the feel of the gameplay. At least this year with Black Ops III, it would be really unfair to characterize it that way; everything has been freshened up and nothing has been sacrificed in the process. Between its co-op Campaign and Zombies elements (which now both include a leveling system, like in multiplayer) and popular multiplayer modes, there’s a little something for everyone. Hell, I didn’t even get into the ridiculous amount of creativity and customization options (such as weapon paint jobs) that exist throughout all three modes.  And there’s still the easter eggs and secrets that hearken back to a older time when developers had a little more time to do fun stuff like that.

Seriously, Black Ops III is one of the best bang for your buck shooters that we’ve seen in years, and is definitely worthy of being recognized as a Game of the Year nominee for its efforts.