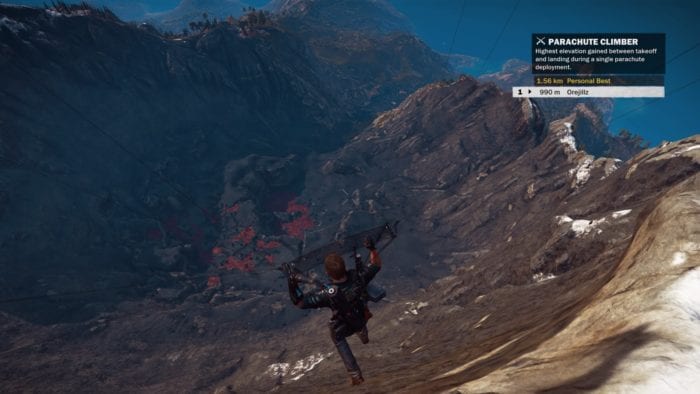 Just Cause 3’s fictional nation of Medici is a really large country. Spread over a several islands (some small, some insanely large) you can bet your bottom dollar that there are some interesting easter eggs laying around. You would think that Just Cause 3 would go for tongue in cheek given the over-the-top nature of the game. But you would be wrong.

If you take a look at Just Cause 3’s map and zoom out, you’ll notice a huge mountain island that sort of resembles a volcano to the northwest. It’s outside of Medici’s red border, which makes it seem like you wouldn’t be able to travel there but trust us, you can. It take a while to get there by boat, and you certainly don’t want to try swimming. If you want to use a plane or a helicopter, approach from the south instead of the east. There are powerful military bases that will shoot you out with zero problems, especially if you’re trying this early on in the game.

If you approach from the south, you’ll come across something a bit odd: ancient ruins. Walk around and you’ll notice that the ruins don’t really mach anything else you’ve seen throughout your travels. Statues that look as if they were ripped straight out of Roman mythology, structures that look oddly familiar yet out of place at the same time, and an odd dust can be found strewn about.

It probably still won’t click until you head towards the center of the island. It is here that you see flowing lava and thick piles of blackened ash and even more ruins. So here we are in the Mediterranean with a volcano that seems to have exploded a long time ago over all of these ancient ruins. That may ring a bell if you’re a fan of ancient history, or are just really into volcanic eruptions.

Back in 79 AD one of the most well-known eruptions in all of world history took place. It was the eruption of Mt. Vesuvius and it buried the city of Pompeii in black ash, destroying the city.

While nothing in Just Cause 3 explicitly states that this is in fact ancient Pompeii, everything seems to be lined up just perfectly to reflect that fateful day.  It was honestly pretty neat, expecting some weird statue but instead being greeted by history.

Ah Just Cause 3, you sure know how to hit us with the feels after a long day of blowing things up.