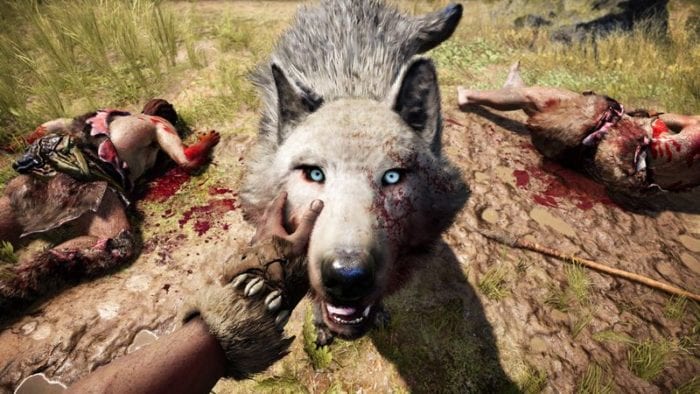 The next Far Cry game is taking the series 12,000 years back, dropping players into the diverse world of Oros as beastmaster Takkar. We got to spend some hands-on time with Far Cry Primal, and as it turns out, the dawn of human life is a pinnacle setting for the series, focusing on the beasts and ferocity that have defined Far Cry for years.

The demo was an open expanse of land, complete with caves, rivers, wildlife and other prehistoric peoples. Occasionally, I would run into these tribes and think, “Ah, brethren. Here on this planet with me, together. Surely we are friends.” We were not friends. After some mutual hesitation, a fresh spear in my eye informed me that we were actually mortal enemies.

This brief doubt is something I’ve never encountered in previous Far Cry games, and it came across as a thematic moment rather than a clarity issue. Past Far Cry enemies are more clearly removed from the protagonist, even though by the end you’re all super violent and that’s kind of the point. Anyways. I never before found myself pausing and considering that the bad guys maybe didn’t want to kill me. But here, we were on the same plane, them and I. Neither of us were trying to take over the world or operate a slave ring. You would think we would identify, but we do not. In a world with fewer divides than any other setting thus far, violence without animosity – violence for survival – is the law. Ubisoft paints hostility into the human element at its prime, and it is perhaps the most extreme level of the series’ themes to date.

Moving on, I brushed off my embarrassment, murdered that tribe, and went back to doing horrific things with my animal friends. This included a bear versus bear deathmatch, hijacking a mammoth and using it to kill its own family, commanding wolves to eat the necks of my enemies, and explaining to the slightly disturbed demo assistant that this was all in the name of science

Expanding your jugular-hungry family is as simple as unlocking the appropriate skill, finding a wild beast, tossing bait, and holding your palm out as some sort of invitation to the big murder party. Over a dozen bloodthirsty animals can be commanded, each with unique abilities – a bear can dig in the ground to find items, a wolf will point towards danger, and a mammoth can kill anything instantly by walking in its general direction. And when I’m not watching a jaguar do my dirty work for me, I’m on a hill shooting arrows or bashing skulls in with a club I lit on fire. You can also wield weapons like hornet bombs, spears, and stone throwing daggers. A large, branching skill tree and thorough crafting menu await a more experienced Takkar, who begins the game just barely scraping by.

All around, the brutality in Far Cry Primal not only lives up to the name, but raises the bar by adding to your arsenal over a dozen more species that are all really passionate about ripping flesh. These animal companions aren’t just murder machines, though. Takkar can summon an owl as a scout, marking enemies and surveying the land from the skies. I’m kidding, the owl is a murder machine too. You can send him down to gouge out an enemy’s face.

I searched for feral badgers, wrestled fish in an underwater pool of blood, and eventually made my way over to the actual mission. After a quick owl scouting of the area, I snuck through a cave and invaded the outpost alongside my trusty Dhole, taking out the warning horn and freeing a hostage. The pieces are very familiar in theory, but come with a new prehistoric flavor that’s untamed in all the right ways. Everything feels genuinely primal, from the menacing stance of your companions to the historically-inspired language created just for the game.

The Stone Age will do great things for Far Cry. Whether the game in its full form will be a all-consuming adventure is yet unknown, but diving into the savagery and wildlife that has always been Far Cry’s greatest star, it feels as though the series has finally made its way home.

Far Cry Primal releases on PlayStation 4 and Xbox Feb. 23, 2016. The PC version lands a week later on March 1, 2016. Pre-order now to receive the Legend of the Mammoth Mission Pack.