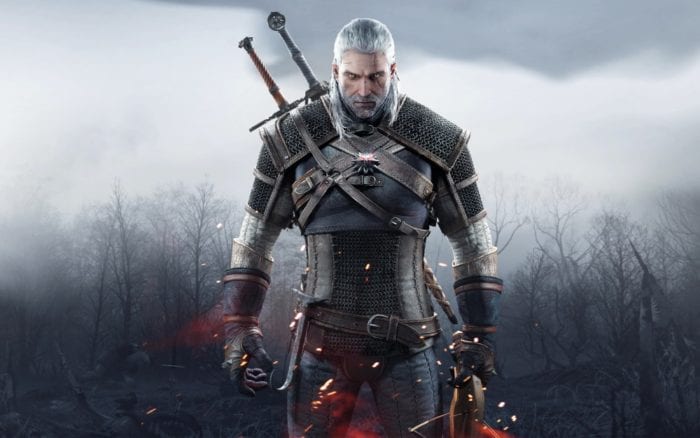 The Witcher 3: Wild Hunt on PS4

Genies, threesomes, spoony bards, and sex atop a stuffed unicorn – what’s not to love aboutThe Witcher 3: Wild Hunt? Playing the game to completion and seeing Geralt’s story through to the end has left me somewhat dazed, and writing this review feels more daunting than anything. So let’s just get right into it.

You play as Geralt of Rivia, the sexy white-haired beast of a man on the game’s cover, and he’s a witcher. In Wild Hunt, Geralt and his lost love Yennefer of Vengerberg (badass name) are tasked by Emhyr, the emperor of Nilfgaard, to find his adopted daughter Ciri. Immediately, Ciri feels like a walking, talking plot device. She’s the heir to the Nilfgaardian throne, she’s Geralt’s adopted daughter by way of the Law of Surprise, and she also happens to have extremely powerful magic that allows her to do some really crazy shit. Oh, and the evil titular Wild Hunt is pursuing her.

Thankfully, though, Ciri has more than enough character to stand on her own, and getting to take control of her during certain chapters was truly a joy. Getting to see specific events play out through the eyes of Ciri, who also bears a slight resemblance to Cara Delevingne (Bad Blood, anyone?), and having a hand in choosing some of her dialogue options helped to further shape her as a strong character on her own. She could be open and friendly to the people she met, or she could be a little more reclusive. Both options felt natural to Ciri’s character, and it’s up to the player how they want Ciri to be portrayed in the story. You can even choose her sexual preferences – always a nice choice to have.

Playing as Ciri also allows you to fight enemies a little differently. Unlike Geralt, Ciri’s a lot faster on her feet and she can reach her foes much quicker than he can. The tradeoff is that she’s a lot weaker, and she can’t use any of the fancy Signs that Geralt has. Still, it’s a good change of pace after hours upon hours of playing as the slower, though tankier, witcher of Rivia.

The combat in The Witcher 3 feels polished and refined; even on normal or easy difficulty, players have to think tactically and consider their enemies’ positions before deciding whether to strike or parry. Sustaining injuries during combat is dangerous as even with the help of a handy Swallow Potion, your health regenerates very slowly, and it can be easy to get overwhelmed by your foes.

As a witcher, Geralt also has various Signs at his disposal which allow him to cast several types of magic to give him an edge in battle. Igni has him throw fire at his enemies, while Quen casts an explosive, protective shield over his body. The key to winning fights is knowing when to cast Signs and when to parry. It makes for a very compelling experience, really, as the game puts you right into the shoes of a witcher each time you encounter a wandering monster.

That’s what’s so fantastic about The Witcher 3. Yes, you kill monsters, loot valuables and materials, craft weapons and armor, you level Geralt up, pour points into a skill tree, and he becomes even more ridiculously badass. Basically, it’s an RPG. But it does the RPG thing so incredibly well.

While roaming the world of The Witcher 3, there was always something going on at every corner and every turn. A knight would flag me down and ask for a duel, or I could stumble upon an imprisoned soldier who needed my aid, and many times, I’d have to make decisions that may or may not affect me in the future. That’s the cool thing about The Witcher 3. The game encourages you to play however you want. Do you want to kill the soldiers that just insulted you? Or would you rather keep the peace by buying them a drink? It seems inconsequential. After all, they’re just grunts. How could they possibly affect the story? But The Witcher 3 constantly surprises you with various outcomes and effects that can stem from the most minute of decisions.

With that in mind, it’s hard not to draw comparisons between Wild Hunt and last year’s Dragon Age: Inquisition. It’s often easy to predict the kind of impact your decisions will make in most RPGs. Do you side with the mages or Templars? Big decisions like these don’t come often, if at all, in Wild Hunt simply because Geralt only ever really has control over his own actions, and not that of others. You can dish out advice but don’t expect it to be taken. This allowed me to play through the game without much headache because it was usually impossible to know how my decisions would affect Geralt down the line.

If anything, this only helped to increase the level of immersion that the game provided. Taking on the role of a witcher naturally meant that I’d have to slay monsters to earn some coin. This is where the detective work comes in. You’d have to look around the village for witnesses, see if you can get any clues about the kind of monster you’re dealing with. After that, you’d have to look around the crime scene and try to track the monster down from there. Before engaging the monster in battle, though, you’d be wise to take a quick gander at Geralt’s bestiary to learn more about the nature of the monster and what kind of potion you should brew in preparation for the fight.

Being a witcher is all about cooking up strange concoctions to be applied to both your body and your silver sword. You have to really study the monster’s behavior, its attack patterns, figure out how best to exploit its weaknesses, and then go in for the kill. More often than not, the witcher contracts and other optional side missions you take on also come with a good serving of lore and backstory. The Continent has been ravaged by war between Nilfgaard and the Northern Realms, and the villagers are the ones who suffer. These quests often give Geralt the opportunity to see what it’s really like for those living in wartimes with no way of defending themselves or fighting back.

The optional missions were never as cut-and-dried as simply going to place X and killing Y monster; for that brief period of time, I was truly invested in the wellbeing of the people who had hired me, and I was determined to see my job through as a witcher.

When Geralt isn’t slaying monsters or urgently trying to track down his ward, he’s probably busy Don Juan-ing it up with sorceresses who all look like sexy models. So regardless of which sorceress you ultimately decide to sleep with, you really can’t lose.

Sex in the Witcher games has always been seen as a light-hearted affair. Witchers and sorceresses are sterile and infertile, so naturally you can expect some crazy things to happen when they get together. In Wild Hunt, the romance scenes are often cheesy and even a little cringe-worthy, but it’s evident that a lot of thought has been put into the writing of these subplots so they never feel superficial or tacked on. Whether you choose Yennefer of Vengerberg or Triss Merigold of Maribor (also a very badass name), you can rest easy with the knowledge that you won’t get a copout ending to your chosen romance subplot.

I don’t think I even have to mention this, but the game also happens to look gorgeous on the PS4. The world of The Witcher 3 is massive, and aside from a few draw distance issues, the towns, cities, and its forests feel vibrant and aesthetically pleasing to the eye. So much careful detail has been poured into The Continent it’s hard not to pause every few minutes to take screenshots of the beautiful in-game sunsets. I’ve played Wild Hunt’s story to completion and I’ve slain countless monsters, but I’m pretty sure I’ve barely seen half of what CD Projekt Red has to offer in this gargantuan universe.

However, as with all open-world games, The Witcher 3 does have its fair share of problems as well. For starters, its loading times can be excruciatingly long, perhaps even on par with pre-patch Bloodborne. There’s also an odd issue where certain characters would take awhile to load into existence whenever you entered an area.

Not to mention, the inventory system in The Witcher 3 is overwhelmingly disorganized. During the course of your adventure, Geralt will pick up a large number of books, contracts, letters, and papers. All of these readable items will be shoved into your ‘Useable Items’ menu, along with your food items and potions. This doesn’t become a problem until a little later in the game when you’ve crafted so many things it becomes near impossible to find the right potion you need without taking a minute to sift through your inventory. Why your books and letters couldn’t have a separate inventory tab of their own is beyond me, but that’s just how it is for now.

In spite of these technical issues, there’s no doubt that The Witcher 3: Wild Hunt is a real marvel on the current generation of consoles. The Continent feels boundless, and there’s simply an endless amount of things to do. The air of mystery surrounding the first half of the main story was already enough to keep me hooked, but taking on witcher contracts and getting involved with the villagers and townsfolk I met along the way was where I spent the bulk of my time.

Over the past week, whenever I wasn’t playing Wild Hunt, I was either thinking about playing it, reading up on the game and brushing up on my Witcher lore, or just writing about it. I haven’t felt so invested in an RPG since… well, okay, since Bloodborne. But my point still stands. CD Projekt Red has outdone themselves once again with The Witcher 3: Wild Hunt. It is a shining example of what RPGs should be: an experience that makes you believe that you’re truly part of a game’s world and that you have a very real stake in it. That’s exactly what Wild Hunt has achieved here.