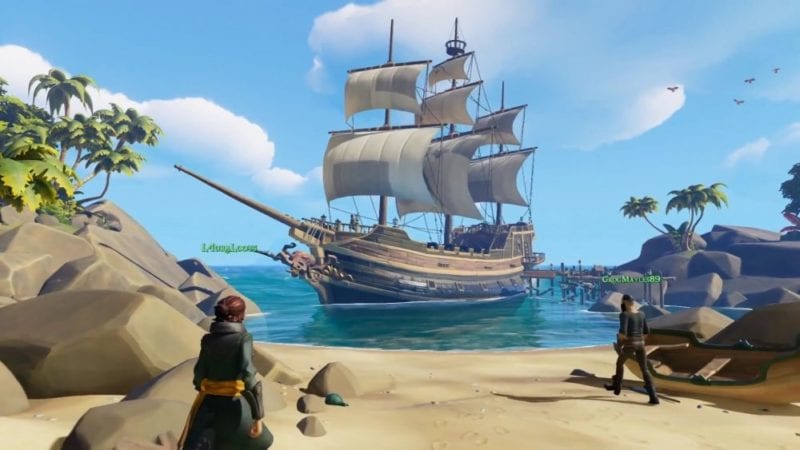 It’s already been a year since E3 2015, and since then we’ve seen one of the best years of gaming in a long time. Many long-awaited games finally hit shelves last year, like The Witcher 3: Wild Hunt, Halo 5: Guardians, Metal Gear Solid V: The Phantom Pain, Fallout 4, and Rise of the Tomb Raider. It was a wild year for games and announcements, but there are a surprising number of games and projects from the show that we haven’t heard much from since then.

One of the most notable absences from last year’s E3 is Microsoft’s augmented reality headset, Hololens. At least year’s Microsoft conference, we got an impressive and lengthy demo of Minecraft running with Hololens: displaying the power of the hardware by showing a chunk of the blocky world rendered on the table in front of the player. At the time it seemed like this was Microsofts primary jab at the “reality technology” market, but we’ve yet to hear much about the device since then. It’s clear that the Hololens is still very much in development, but perhaps we shouldn’t expect a retail-ready version for the foreseeable future. In the meantime, it looks like Microsoft might be teaming up with Oculus in a big way to get the Rift running on Xbox.

Perhaps less surprisingly, we’ve also yet to hear anything concrete about Shenmue 3 since its surprise unveiling at last year’s Sony E3 conference. After massive success with Kickstarter and extra support from Sony, it looks like the game is in full-swing development. But games take a long time to make, and Shenmue has always been a big undertaking in the past, so maybe we shouldn’t get our hopes up to play the game for several more years.

Last year during the same conference we got a pair of other pretty huge surprises: The Last Guardian and a Final Fantasy VII remake on PS4. It was incredibly exciting to see both long-awaited and long-desired titles to make an appearance, and it looks like we’ll be hearing more from The Last Guardian at this year’s E3. As for FFVII? Well, it could be a similar situation to Shenmue 3. We don’t know that how far into development the game is, and with the team also releasing Final Fantasy XV later this year, VII could be farther down the road than we initially imagined.

Let’s not forget about some of the other happy surprises that contributed to last year’s great show: Kenji Inafune’s ReCore and Ghost Recon: Wildlands. ReCore came out of nowhere, but looks very intriguing and conceptually original. Wildlands also came out of left field, as it seems to be completely abandoning the “future” theme of Ghost Recon’s last few entries for a new co-op open-world take on the tactical shooter. Both games show great promise and had great reveals, but we’ve heard next to nothing about either since last year, shy of a few Wildlands developer videos. There’s a ton more to talk about, so let’s dive into the rest of the games on our list.

Last year Microsoft unveiled their augmented reality headset, the Hololens. And during their E3 2015 conference, we got an extended look at the headset, including a lengthy Minecraft demo simulating the blocky world on the table in front of the player. But since then, there's been little to no word on the headset, and there's no release date in sight.

Last year's surprise announcement of Shenmue 3 made a whole lot of people happy. And after a very successful Kickstarter campaign and additional support from Sony, it seems like the game is in full swing production. But, Shenmue has always been a large-scale production, so it could be several more years until we ever get to play it.

I don't think anybody was expecting a game like For Honor to come out of a big publisher like Ubisoft. After all, multiplayer sword-fighting brawler with hardcore blocking mechanics doesn't exactly scream triple-A. Not much has been said about it since last year, but we're hopeful for a fall 2016 release date.

Since No Man's Sky announcement back in 2013, we've seen the game a whole lot. Aside from gameplay demos in the last few months, the game has also seen two consecutive E3 presentations at Sony's conferences. And after three long years, the game is finally releasing (hopefully) this August.

Another big surprise announcement of last year, Final Fantasy VII's remake is almost too cool to be true. Desire for a remake of the game had gotten so ubiquitous over the years that it seemed like it'd never actually happen. But here we are, and it's looking pretty awesome from the tiny bits shown.

Ghost Recon: Wildlands kind of came out of nowhere. It didn't feel like anybody was particularity jazzed about a potential return of Ghost Recon, but Wildlands looks like a breath of fresh air to the tactical shooter series. The studio has been near radio silent since last year, so it might be a while before we see any more from the game.

Ahhhh, The Last Guardian: the game that everybody thought would never come out, be announced at the next convention, or had been cancelled long ago. But last year, Sony finally re-announced the long-fabled game as a PS4 experience, and it's looking spectacular. It looks like we'll be seeing even more of it at this year's show, so stay tuned.

It's always fun to see new IP come out of nowhere during E3, and ReCore was a good example of this last year. An Xbox One exclusive from Mega Man creator Kenji Inafune, ReCore is mostly a big question mark right now. But what we do know is this: it's looking gorgeous.

Horizon: Zero Dawn garnered a lot of well-deserved buzz last year after a stellar demo during Sony's conference, and since then we've only heard bits and pieces about the game. That is, until today, when Sony released a new trailer for the game while also announcing the game's delay to February 17th.

Last year we got a brief glimpse at Day-Z creator Dean "Rocket" Hall's next project, ION. He described the game as an "emergent narrative MMO" about building the universes first colonized humans. It all sounds very abstract, and we haven't learned much more about it in the past year. Maybe we'll have more details by next month?

The Legend of Zelda (Wii U)

This year is most definitely the E3 that we'll be seeing a whole lot more on whatever the next Zelda game truly is, as Nintendo has dedicated the majority of its showtime to the game. So the best we can do is sit back, relax, and enjoy the show.

Kingdom Hearts III was announced way back in 2013, but last year we got our first big trailer for the game, and the big injection of hope that the game would come out in the near future. Since then, we've heard pretty much nothing. So it looks like we might be twiddling our thumbs for a while more.

Fans of South Park: The Stick of Truth were ecstatic to hear the game would be getting a sequel in The Fractured But Whole. This time around the game has a superhero theme, and surely many many butt jokes. Hopefully we'll learn more next month.

Media Molecule is best known for their strange and lovable style in games like LittleBigPlanet and Tearaway, but Dreams is taking that notion to a whole other level. The game is mostly a question mark at this point, mostly because it is described as extremely open-ended. Is it a game-making tool? An art tool? Probably all of those things. Hopefully we'll be able to play it ourselves by the end of the year.

Only one year after announcement, it looks as if Gears of War 4 is locked in as a fall 2016 release. Buzz from the multiplayer beta has been mostly positive, and it'll be interesting to see how the world of GoW has changed for the next generation.

Another game that has seen almost zero news since its announcement last year, Sea of Thieves sure has a lot of fun themes going for it. We hope to see more of it during Microsoft's conference this year.

Metroid Prime: Federation Force: a game that many of you probably forgot was announced last year. This 4-player 3DS game had many scratching their heads about what exactly it was, and we're still not entirely confident to say. We'll have to wait and see if Nintendo makes time in-between Zelda announcements to say any more.

It's safe to say that not many were expecting a surprise announcement of a sequel to NieR. But the game seems to be in full swing, so maybe we'll hear more about it during the show this month.

The Tomorrow Children has been out there in various forms for two years now, with several showings at E3 and other conventions, as well as open and closed alphas. The game was slated to release last year, so hopefully we can get a concrete date soon.

Cuphead is yet another game that has been in the wild for a few years now, and every showing of it has looked pretty incredible. Let's hope 2016 is finally the year of Cuphead.

Remember last year? When Bethesda subtly announced an Elder Scrolls collectible card game and then didn't talk about it for almost a year? Well the game has a name now, and it's Elder Scrolls: Legends. It looks like the company is gearing up to reveal more details during their E3 conference this year.
Comments
Continue Reading
Related Topics: