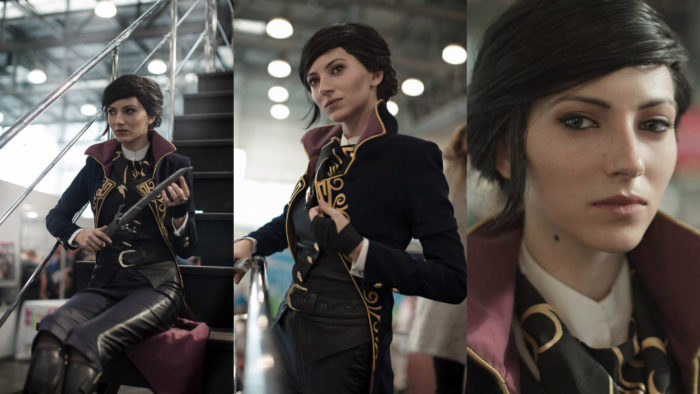 Dishonored 2 is almost here, taking us back into the unique world that Arkane Studios has describes as “whalepunk.” Think steampunk, but basically all energy is run off of resources harvested from whales.

Dishonored 2 lets you step back into the shoes of Corvo Attano, who’s voiced this time around, or for the first time take control of his daughter Emily Kaldwin. The Dishonored games have incredibly unique character designs, making them the perfect candidate for cosplayers. Many talented individuals have crafted their versions of the characters at this point.

The most obvious candidates are the main characters Corvo and Emily, and you can definitely find a huge amount of cosplay for both characters. There’s some really high quality stuff made for both, and it’s incredible to see how realistic people have made Corvo’s mask look. Not to mention the striking quality of some of the Emily cosplayers. You can’t forget about The Outsider of course, the cryptic supernatural character that helps bestow powers onto you.

On top of all that, there’s quite a few minor characters and antagonists that people have chosen to cosplay as well. The first Dishonored was filled with different villains, as each mission in the game basically gave you a new assassination contract. You have the mysterious masked Lady Boyle and Lord Shaw, the golden clad Overseer Teague Martin, and even a cosplayer portraying a City Watch Officer.

Then of course you also have character who are featured prominently in the first game’s DLC. Daud was one of the main antagonists of Dishonored, who actually turned into the protagonist of the DLC. You also have a couple cosplayers portraying the Brigmore Witches and the dangerous Delilah Copperspoon.

Dishonored 2 launches on November 11 for PlayStation 4, Xbox One, and PC. Undoubtedly as players start digging into the new experience, they’ll find new character so focus on and create equally stunning cosplay for.

Daud the "Knife of Dunwall"