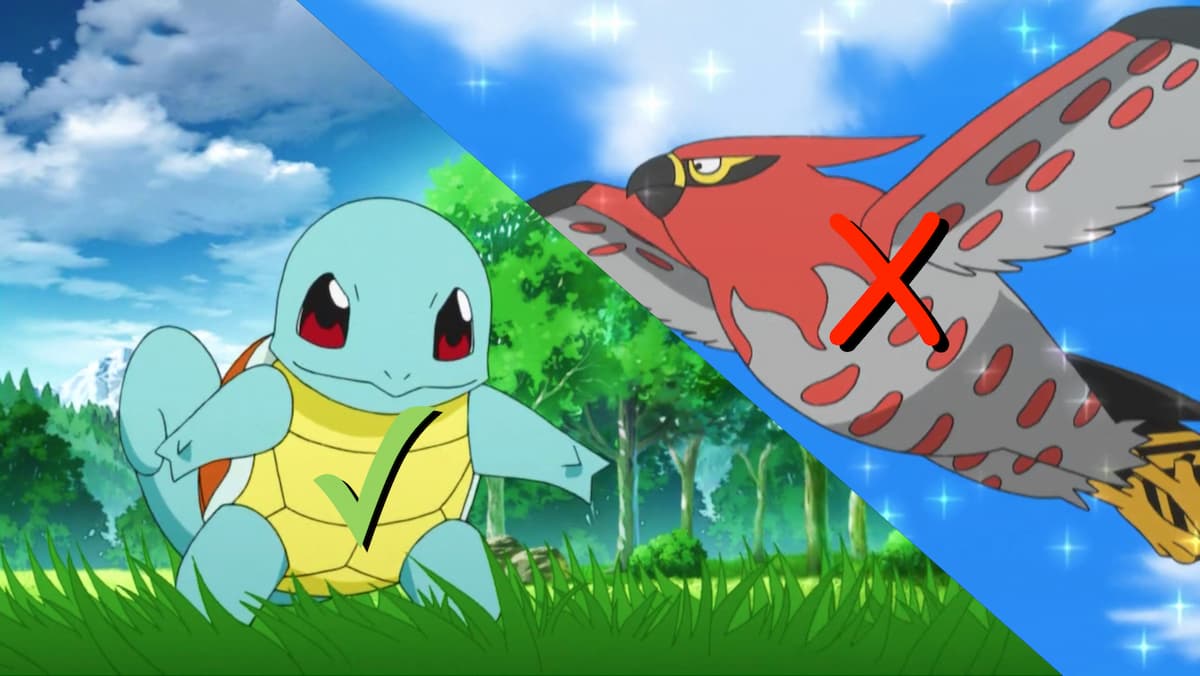 From its earliest days, Pokemon launched into a stratosphere of fame that necessitated careful consideration of its branding.

Pikachu is very much the face of the franchise, thanks to its marketability and design. But if it had been called, say, Elemouse, would it have had quite the same staying power? I posit not, as that sounds more like a French surname than a suitable monster delineation.

The sprawling RPG series has had all kinds of weird and wonderful beasts over of the years, and many of them have names that inspire intrigue. Some very much do not, so we thought we would list them for your edification; the top 5 best and worst Pokemon names!

One of the OG’s, with a moniker that represents everything these games are about. While its contemporaries, Bulbasaur and Charmander, are a little more on the nose — perhaps the latter should have been called Hamilton, after all — the tidy amalgam of the words “turtle” and “squirt” marries the reptilian taxonomy with its aquatic typing.

Unfortunately, its evolution goes a bit too far off-course with Wartortle, providing a strange name that many children would mispronounce as “Warturtle.” Several schoolyard fistfights ensued over that rudder-eared little jerk, and I can only assume our lives were made 0.3% worse by its existence.

Squirtle, though? It’s a top-notch Pokemon in every sense of the word, and it deserves its flowers. What kind of flowers would you give a turtle, exactly? Furries, please advise. For science. Fur science.

As much as generation 1 is lauded among purists (don’t make me pull out the article that made you mad), some of its creative choices were on the dubious side.

Several Pokemon names were clearly mailed in, from Haunter to Seel, and then there’s this sucker right here. What would you call a toxic dirt clod with a strange plant sprouting from its head? Why, I would call it literal depression, of course.

There’s no pun or wordplay for this Pokemon. It is just an actual word. Bulbapedia offers a more optimistic viewpoint, suggesting that it bears similarity to the terms “bloom” and “glume”, which is evidently a leaf-like structure. I’m unconvinced, however, and will just stick to its Japanese name, which I’m pretty sure translates to “smelly flower” (also my nickname on the lacrosse team).

Cats are all the rage in 2023. I’ve made this decision just now, and we can celebrate this revelation by raising our glass to one of the snuggliest ‘mons this side of Pincurchin.

Following the same mindset of what made Squirtle so fabulous, Purrloin takes the word “purloin,” a synonym for thievery, and catifies it. Boom! You’ve got a character descriptor all set to go. Great job, Gerald the Pokemon Namer!

Gen VI’s Espurr also applies this logic to a similar effect; however, we weren’t about to subject you to a picture of that dead-eyed ghoul. It’s bad enough that recent Purrloin designs have started to make it bipedal, as though it’s channeling its inner Espurr by tiptoeing towards your bedside in the night.

Oh no. Oh no, no, no. What exactly are we trying to do with this one, exactly?

Though it is mostly inoffensive in its lacking creativity, this fish Pokemon has a name that kind of makes you shudder a little bit at first glance. Do you remember the first time you snagged it on the reel out there in the Hoenn seas?

“Hello there, sailor,” it growls seductively, its bedroom eyes locked onto its prey. “I am the Luvdisc.”

When a Pokemon has a name that more closely resembles a DVD of the top 10 dating tips, you know something ain’t quite right. It is best to throw it back out to the ocean as quickly as possible before it follows you home — return that Luvdisc from whence it came!

Sensing a theme with good Pokemon names? You basically mash two words together like a toddler mashes dolls together when they want them to kiss. I should probably come up with a better analogy, but I doubt I will.

Not only does Crabominable roll off the tongue — figuratively and literally, it is over five feet tall and I refuse to believe it would stay on your tongue for more than a split-second — it also pays homage to its Ice-typing, with an allusion to the Abominable Snowman.

Then, you look at its design, a wispy tuft of hair protruding from its head as it brandishes its two large boxing-glove-like appendages at you. Does this not sound like an abomination, a crime upon nature itself? All because a Pokemon is very ugly and should be thrown into a fire does not mean it cannot be thought-provoking.

Overall, I’m rather convinced that generation 4 had the weakest designs in the series. It’s a hill I’m willing to die on, and I plan to position myself in such a way that when I expire, my corpse shall roll down said hill in an effort to intimidate my detractors.

Kanto’s Lickitung was yet another example of less-than-clever naming conventions, and when its garish evolution cursed the frosty plains of Sinnoh, it came equipped with an identity just as off-putting. I challenge anyone to say the name “Lickilicky” without subconsciously putting on the creepy voice of a deviant.

It’s nigh impossible, and you’ll probably frighten innocent bystanders if you push the issue too far. To offset this, I recommend you nickname your Lickilicky something distinguished, like Reginald or Eloise or Benoit Blanc. Daniel Craig would be honored, surely!

Truth be told, I’m none too fond of the Pokemon modeled after household items. It reeks of a Game Freak staffer trying to beat a deadline by frantically looking around their office and selecting the first thing they land upon. Until they give me my Hatori, I won’t budge.

Polteageist gets a pass, however, for adhering to my rules of good Pokemon naming. Even better, it’s not just a combination of two terms in quick succession but a stealthy insertion of one word into another. Did you see it, everyone? There’s “tea” hidden in this name!

I know, mind blown. For going above and beyond, it edges out its pre-evolution, Sinistea, which is also an excellent name. It further invites the opportunity for a third stage evolution called, say, “Tearifying” or “Tearible” or “Monstrositea.” I’ll accept payment for my brilliant ideas in cash only, Nintendo.

This is the worst one. I would be very happy if an ambitious time traveler returned to Pokemon X and Y’s development cycle to retroactively remove this awful creature from the folds of history.

If you thought one-word names drew my ire, you have not yet seen the fury I hold for Talonflame. There is nothing amusing or erudite behind sticking the word “talon” on the word “flame.” I am half-convinced that this was a placeholder they were supposed to amend later on, which they simply neglected to circle back to.

It sounds more like a Paradox Pokemon, and those wouldn’t even exist for another nine years. If only Redditor KaptainKestral had been present in the brainstorming session, we might have received his brilliant suggestion of “Pyrogrine.” Abovementioned time traveler, maybe take the good kaptain with you on your mission?

Perhaps it’s just recency bias, having had to string together three coherent paragraphs about my disdain for Talonflame, but newcomer Maushold may have claimed top honors the moment it strolled down Main Street, Mesagoza.

Wisely, they elected not to land on “Mousehold,” which looks like the finishing submission move for a professional wrestler themed after rodents, instead inserting the German spelling of “maus.” It reads a lot better, and now you can tell your parents you are fluent in German, assuming they will not ask for any translations beyond “mouse.”

My grand scheme is to mass produce these diminutive vermin with charming nicknames like “HausOfMaus,” brightening the days of trainers around the world. Clearly, I have too much free time if this is a priority, but that’s neither here nor there.

We finish off by bucking the trend and proving that names based on wordplay do not always stick the landing.

By Bulbapedia’s estimate, this Rock-type beast’s name combines the word “gargantuan” with “NaCl,” the chemical formula for sodium chloride. This big brain move played well enough with the first-stage evolution, Nacli, though it was becoming a bit of a mouthful by the time it had evolved into Naclstack.

The joke had well and truly expired once Garganacl emerged from the depths. To evoke the very word is to sound like you’re trying to find a suitable onomatopoeia for the act of gargling, and etymologically, it bears resemblance to someone trying to type Gargamel of Smurfs fame, before falling asleep and smushing the keyboard with their face.

The Pokemon itself also looks stupid, too. Get your Minecraft-looking salty ass outta here.