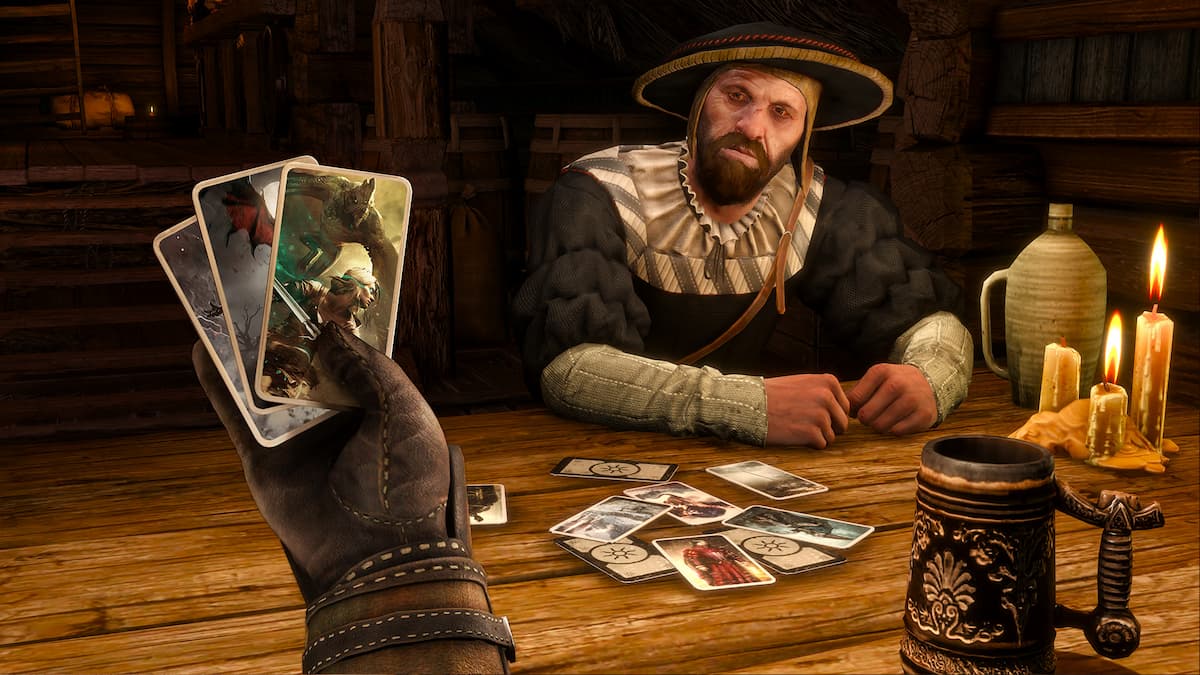 The Witcher 3’s next-generation update has me on my fourth playthrough of the game. I’m a bit of a Witcher nut, as you can imagine. You might think I’d be bored of it all by now, but one of the beauties of this 150+ hour RPG (of which there are many) is that the depth of every single quest in the game –main, side, contract, and scavenger hunt– is such that even the smallest activity feels like an epic adventure.

Don’t worry, though, I’m not here to blather on about the quality of The Witcher 3’s quests. You’ve all heard that ramble many times over by now, I’m sure. On the contrary, I haven’t even been playing many quests for this particular playthrough — not the traditional kind, anyway.

Instead, my Geralt has put his search for Ciri on the back burner and has instead been distracted with a Gwent marathon. He and Roach have been galloping across The Continent, challenging every blacksmith, innkeeper, and idle guard they can find for Crowns, cards, and glory!

Gwent has to be one of the best mini-games in an RPG ever. It’s something I actually ignored in my first-ever playthrough of the game and only got into on my second pass. Shortly after, my girlfriend played The Witcher 3 and loved Gwent just as much; then, she bought us actual real-life Gwent cards that we still play in country pubs together to this day. See, I told you I’m a Witcher nut.

But there’s a wee problem with Gwent in its original form. It kinda sucks. Well, it doesn’t suck; it’s just not properly balanced in a way that any collectible card game should be and would be if it wasn’t, well, a mini-game in an already enormous and complicated RPG.

Gwent has, of course, since been re-imagined by CDPR with its own fully-fledged spin-off. There’s even a single-player 20-hour standalone RPG based entirely around “proper” Gwent called Thronebreaker, which, incidentally, I reviewed back in 2018 and thoroughly enjoyed.

Gwent obviously has a massive following, not just the new-and-improved spin-off variant but the original game integrated into The Witcher 3. I know this not only because I remember the fever-pitch hype of excited players raving about it way back when Wild Hunt launched in 2015 but also because there are countless Gwent overhaul mods available for the PC version of the game. They’re extremely popular.

I’ve played several of them, actually, and they rebalance Gwent in clever ways that make it infinitely superior. There’s less luck involved; the skill ceiling is higher, and several of them introduce new and exciting cards to collect.

But none of that is available in the recent next-generation update I’m playing on PS5. The Gwent marathon I’m on this time around (which I’ve done before if it wasn’t already obvious) is just the vanilla version. I could just play it on PC using mods, sure, but I don’t really understand why CDPR didn’t include an overhaul with the patch.

From what I understand, some of the high-resolution textures in the game are community mods, so why not include something like Gwent Redux or Gwent Plus with the update too? It seems like a big oversight to me. This could have been a huge draw to get people not only back into The Witcher 3 but also the Gwent standalone itself, which recently launched an expansion called Rogue Mage earlier this year.

Maybe the higher-ups at CDPR considered such an idea, or perhaps there were issues integrating such a mod into the games officially. I’m not sure. I really hope it at least was considered, though, because if it was completely ignored, that’s a crying shame for console players — especially since the standalone Gwent console version was actually nuked a couple of years ago by CDPR.

In any case, I can tell you one thing with absolute certainty: if some form of Gwent isn’t included in CDPR’s upcoming The Witcher games, I’ll riot, and I won’t be the only one!