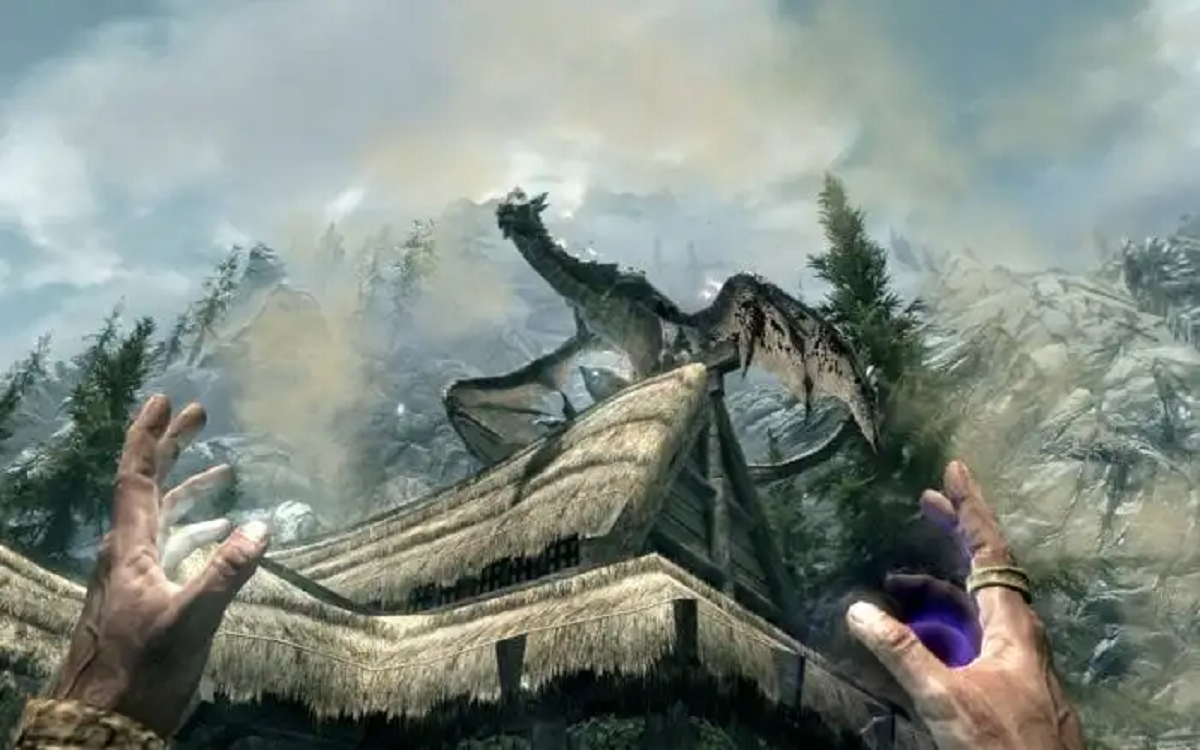 As of the release of The Elder Scrolls V: Skyrim Special Edition on the Xbox One means that you’ll get to enjoy mods with your RPG experience on consoles. Here are the 50 best Skyrim Xbox One mods you can get right now.

Now this may sound like a silly mod to include on a list of best mods to get, but if you’ve played Skyrim before, then you know Honey can be difficult to come by and stealing from Golden Glow Estate isn’t always a smart move. Placing these bee hives in front of Honningbrew Meadery is a stroke of genius.

If you’re anything like us, you may have grown fond of the dragon sitting atop the Throat of the World. Once you complete the main story though, you’re forced to kill him if you want to do every quest.

Fortunately, this mod allows you to complete the same quest in a way that keeps your flying buddy alive.

You know what Skyrim doesn’t have enough of? Spaceships.

In fact, it doesn’t really have any, at least not until you install this amazing mod that adds a usable ship which can serve as your base, and a pretty cool questline. Did we mention that you can call in orbital strikes with it, too?

Alternate Start is one of those mods that really transforms how you experience a game. You’ll be able to be something other than a prisoner at the beginning of Skyrim and see where life takes you from there.

Cinematic Kills are great at first, but they can really put a dampener on the immersion after a few hundred times seeing them. This simple mod allows you to disable them so you can keep it moving without any odd interruptions.

Using magic is great in Skyrim, except for the parts where you have to level up each school independently and deal with long casting times (as well as large Magicka use). This mod lets you craft every scroll in the game so you can cast spells all willy-nilly while focusing on leveling up other skills.

The name may be difficult to pronounce, but it adds a new robotic companion that has a ton of dialogue, custom armor, clever interactions, and an interesting quest line.

This mod allows you to unlock a Riekling porter who will tag along and carry all of the junk you pick up during your adventures.

The campfire mod adds a survival system to Skyrim which allows you to set up camp, build fires, hunt with new abilities, and more. It’s a new and interesting way to experience the world Bethesda has created.

Bringing up your map while exploring the world can really spoil the immersion, but it’s almost impossible to navigate the roads without doing so. The Point the Way mod adds accurate road signs to intersections so you can stay in the world and rely much less on pesky maps.

The Forgotten City is an award-winning, fan-created expansion to The Elder Scrolls V: Skyrim. You’ll get to enjoy new dungeons that are full of mysteries, new story segments, and multiple endings.

This mod does just what you’d expect. It gives every merchant in the game 10,000 gold so they can finally be able to afford all the junk you’re selling.

This is another mod that adds a sizeable amount of story content to the game while also introducing new elements such as a fully functional train, enemies, and weapons.

You can never have too much storage in Skyrim thanks to all of the Daedric Artifacts, cool weapons, and steal-able items in the game. Dovahkiin Keep provides tons of chests, mannequins, and other means of displaying your spoils.

With all of the new adventures and enemies you’ll be up against thanks to the addition of mods on the Xbox One, you’ll want some really powerful gear to help you run right through. That’s where God Gear comes in, making you into an unstoppable badass.

The items added through this mod are nothing short of awesome. Both give the ability to sense NPCs through walls, though they each have their own nuances. The Goggles let you see at night, and the Scouter works like the ones you’d see in Dragon Ball Z. They highlight enemies and even color code them based on their threat level.

This mod’s tweaks make being a mage even more enjoyable thanks to new abilities, lower cast times, and improved animations.

Now that you have an improved magic experience, why not throw in some powerful spells based around earth, water, and wind? You’ll also gain Poison-based spells which scale off of your restoration, opening up a host of new magical strategies to implement.

This is an ambitious mod, but one that really ups the level of immersion in Skyrim. You’ll be able to trot right into cities from the open world without any load screens, turning the entirety of the country into one big area.

The Ring of God Mode

Sometimes you just want to run free and decimate anyone that crosses you. However, you can be kind of squishy in Skyrim, allowing enemies to tear you apart if you aren’t properly equipped. This mod solves that problem for you with some drastically increased stats that’ll allow you to crush any opponent with ease.

So you don’t want to make yourself invincible or anything like that, but you do want god-like power to suit your high level. That’s where this mod comes in to equip you in some weapons and armor capable of some serious badass-ery.

If you ever found yourself missing the game-breaking Acrobatics and Athletics skills from Oblivion, this mod is for you. It allows you to jump 50% higher and run for 50% longer. It’s simple, but jumping over enemies never gets old. It also makes climbing a whole lot easier.

Legendary Creatures adds powerful enemies to the world of Skyrim that guard equally powerful armor, weapons, and spells. Hunting them all down makes for some great fun, and feels like a more fleshed-out and sustained version of the Kyne’s Sacred Trials questline.

This mod adds a book that resembles Oghma Infinium and allows you to increase your perk points. You can read it an infinite amount of times to keep gaining more and more points, allowing you to snap the game over your knee like a twig.

It’s silly to only be allowed to transform once per day after all the work you put in to gaining the werewolf power in the first place. Unlimited Werewolf Transformations allows you to howl into the sky as often as you want, ripping and tearing your way through enemies whenever you please.

You can never have too many ways to yell at enemies and watch them perish. This mod adds 31 new amazing shouts, each with their own special and interesting quirks and effects. You’ll be able to spend hours experimenting with them, all while your enemies flee in terror.

Skyrim can struggle to run at times on the Xbox One. Thankfully, someone came up with a way to help things run a lot smoother. No matter how big the dragon you’re facing or how numerous the skeletons charging at you at once, this mod will keep the game running optimally so you can stay immersed.

This does exactly what the title says: It gives you highly detailed armor resembling the outfits that both Triss and Yennefer wore in The Witcher 3: Wild Hunt. If you’re dying to bring some of the Witcher series’ style into Skyrim, this mod is for you.

Tired of stressing over which enchantment to use on your most valued weapon for fear of unlocking a better one latter? Download this simple mod that allows you to use enchantments as much as you want without having to go into menus to charge them.

Climates of Tamriel adds a lot more beauty to the world of Skyrim through nature. New cloud textures and hundreds of weather variations make the world feel more vivid and alive, and can help you to feel like you’re wandering through a fully realized world.

This mod replaces Fus-Ro-Dah with Shai Labeouf’s “just do it.” It’s a great way to deal with guards and pesky bandits, while also inspiring any nearby NPCs to seize the day and pursue their dreams.

The world of Skyrim can get really dark, and having to cast a spell to see isn’t always fun. With the Wearable Lanterns mod though, you can wear a lantern around and see everything without a torch taking up one of your hands.

The world of Skyrim can be a bit barren. This mod adds some flora to the environment, turning the entire world into a beautiful garden full of verdant wonder.

The Map in Skyrim has never been the best, but with this mod you’ll be able to see roads and obstacles clearly. It’s ideal for anyone who plans to spend multiple hours exploring Skyrim’s far corners.

Like Lucien, Sofia is a fully voiced follower that is helpful and hilarious. Having her tag along on your adventures is sure to keep them bright and cheerful, even as she slaughters whatever enemy tries to get within a few feet of you.

Inigo is a Khajit follower who is very powerful and doesn’t affect your follower count, so he can join you alongside Sofia, Lucien or anyone else you wish to travel with. After all, you can never have too many followers.

Mods that add more to the beauty of Skyrim are always worth downloading, and Skyland is no exception. It provides a complete texture overhaul that adds an extra dash of realism to the experience.

Unique Uniques changes the appearance of many weapons to give them more of a legendary and exotic feel. You can be sure that the rare weapon you spent dozens of hours questing for won’t be a simple Steel Sword with special enchantments once this mod is installed.

More atmosphere is never a bad thing. The Vivid Weathers mod makes all of the weather effects look even more realistic, helping to drag you further into your adventures across Skyrim’s temperamental tundra and plains.

Feel like royalty with some of this mod’s beautiful Cloaks and Capes. Men will fear your status, while women will be envious that they don’t have such fine clothing to wear most anywhere in the world.

Frostfall: Hypothermia Camping Survival dials the difficulty of the world up to 11 by taking freezing weather into consideration and making survival way more immersive. You’ll need to account for how often you get wet, the clothing you wear and several other factors in order to make it through each day alive.

The Temple of Time: Kokiri’s Valley

The Legend of Zelda: Breath of the Wild is unarguably a huge hit, but perhaps you’d like a bit more maturity in your adventures. Bring a piece of Link’s adventure into Skyrim with the Temple of Time mod, complete with a Master Sword to unlock, an Epona to ride, new characters to meet, and more.

The Dwemer Storage Cube is a home you pull out of your pocket. Simply interact with it in your inventory and you’re transported to a safe haven where you can store gear, take a rest, and do pretty much anything else you’d do in a house.

If you’re looking for a meaty expansion, that introduces new characters, new questlines, new dungeons, and new monsters, then Moonpath to Elseyr may be just the mod you’re looking for. Amazingly, it’s already been downloaded over 1 million times, which is pretty darn impressive, no?

Those are the best Skyrim Xbox One mods you can currently get. For more on all things Skyrim and mods, check out our guides on the best Skyrim PC mods and our trivia quiz aimed at only the most knowledgeable fans.