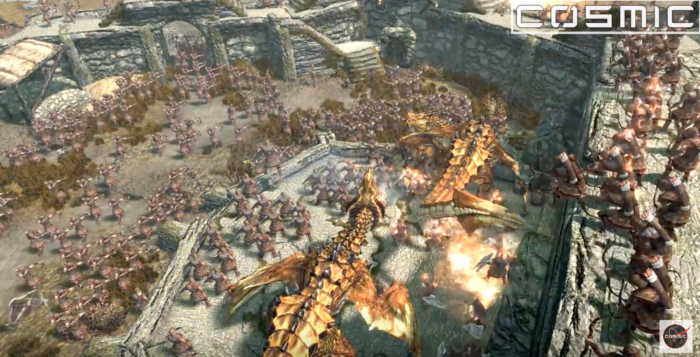 It hasn’t even been a week since The Elder Scrolls V: Skyrim Special Edition was released and yet we already have our first epic battle mod video thanks to Cosmic Contrarian.

That’s right ladies and gentleman. The same YouTuber that brought us countless epic Fallout 4 death matches is now giving us a Skyrim brawl to remember— 100 Dragons vs. 1000 Imperial Archers.

From the very beginning of the chaotic encounter it’s clear who has the upper hand. As soon as the wave of dragons descends upon the archers, they seem frantic and unsure of which way to even point their arrows.

It isn’t long before blasts of fire start swallowing them even as they continue their valiant efforts to keep shooting their arrows at the sky.

At the mid-way point of the 12-minute battle, however, it seems less certain who will come out victorious. Bodies of dead archers begin to pile up but dragon carcasses are also littering the battlefield.

Anyone who has watched Cosmic Contrarian’s epic battle mod videos before knows that every second counts and any battle can have an unexpected turn at any given moment.

You’ll have to watch the video to see who comes out on top, but there is something even more entertaining than seeing who will be victorious.

Skyrim wouldn’t be Skyrim without those quirky, buggy moments that are just pure fun.

With this being a mod, it’s no surprise that these moments are in abundance.

If you watch the battle closely you can spot archers surfing on flames, dragons clamping their jaws down on invincible foes and one archer who can apparently surf on fire.

Check out the video below and slide over to Cosmic Contrarian’s channel to see even more epic encounters.