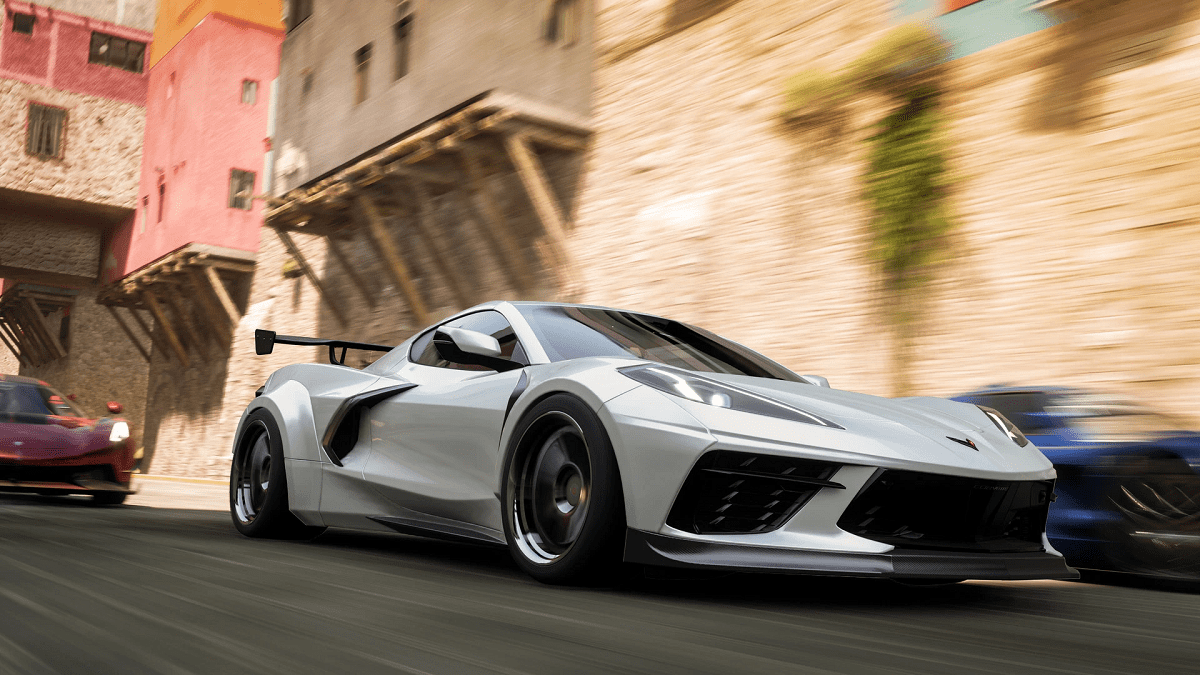 The most recent of Codemasters’ rally racers has recently been free for PlayStation Plus subscribers, but even if you missed out on that deal or are playing on another system, Dirt Rally 2.0 is still worth picking up.

You can make your own championships from any stage in the game to create the perfect series of time trials to find out once and for all who is the best rally driver amongst your friends. Be warned though, Dirt Rally 2.0 isn’t forgiving at all.

Every year, Codemasters (yes, them again) prove that they’re the masters of racing sims, and the F1 titles are the best example of that.

F1 2022 carries over everything that the series has done so well over the years – which is primarily its incredible driving mechanics – and includes all of the new vehicle models, designed around the latest major changes to the sport’s rules. These have allowed for much closer wheel-to-wheel action in races.

There’s also a two-player Career as well as a Real-Season Start feature that allows players to begin their careers at any race that has occurred in real life.

Forza Horizon 5 brings players to Mexico in one of, if not, the most varied and vibrant open-world playgrounds found in a racing game. There are hundreds of cars to drive as you traverse the country with friends. There are races, challenges, stunt events, and much more to participate in alone or as part of a group.

And this is one that can be played by both racing and curious non-racing fans alike thanks to its multitude of accessibility options and customization features that allow players to get exactly what they want out of the game.

The Need for Speed series has had a tough time as of late. The 2015 reboot and Payback were rubbing, let’s be realistic, so it was nice to see Heat bring back some of the quality that had been missing.

The world might be a bit empty, but teaming up with a friend to escape the cops and rack up the dollars will forever be fun, even if it doesn’t quite match the magic of the Hot Pursuits and Undergrounds of the NFS world.

For some people, Crash Team Racing is the best kart racer of all time, beating out even Mario Kart. Nitro Fueled gives CTR the Crash remake service, making it look better than anyone could have imagined.

It can be tough to do all the challenged, but if you’re looking for some fun, fast-paced multiplayer racing, it’s perfect. Also, unlike many other modern games, it can be played in split-screen from the comfort of your couch.

Kart Racers are some of the best multiplayer racers you can find and Sonic lovers have their own they can dive into if Mario Kart and CTR don’t tickle your fancy.

As you’d expect, there are plenty of multiplayer options and, since it is a team based game, you’ll have to work together to get an overall team win as well as try and come first.

Onrush is the best arcade racer of the last few years. It’s fast, action-packed, and taking out other racers is incredible fun. Also, since there are various themed events in the game, it’s as much about working as a team as it is finishing first.

You can join up with some friends online to take on which ever event you’d like, whether that be the Capture the Flag style events or straightforward races.

If you want to impress a friend with how good video games can look, show them Forza Motorsport 7. And maybe once they’re done gawking at the graphics, you can have a race or two on a great-controlling and great-playing racing game.

If you’re more a fan of fast-paced racing games, then you can’t go wrong with Wipeout Omega Collection. It’s one of the fastest racing games out there. With all of the racetracks from Wipeout HD, Fury, and 2048, there’s plenty of content to keep you and a friend occupied for a while.

The industry standard for arcade racing games. Mario Kart has never looked, sounded, or played better than it does in Mario Kart 8 Deluxe. And with the Switch coming with two Joy-Con controllers out of the box, the two-player mode has never been so accessible. This version also comes with a revamped battle mode!

Burnout Paradise makes its way to current gen consoles in the form of Burnout Paradise Remastered. With the game’s ‘Easy Drive’ feature, you can easily invite your friends to a bunch of multiplayer modes, such as Stunt Run, Road Rage, and Marked Man. With a PlayStation Camera or Kinect, you can even witness your friends’ “mugshots”  after you take them down.

Dirt is the premiere rallying franchise. Many realistic racing games see you driving around a circuit, but Dirt (which is a sub-series of the Colin McRae Rally games) sees you racing on tarmac and off-road terrain, and Dirt 4 is no exception. You can race online with friends in pre-determined tracks, but Dirt 4 also includes a custom track generator feature, allowing you and a friend to race on seemingly endless amounts of off-road tracks.

Dirt 5 isn’t exactly as well-received as the previous entry, but it’s still a decent option for multiplayer racing action. The game features 10 international locations that all look insanely good with the visual upgrades afforded by new hardware.

Flatout 4 is a pretty wacky racer. It features over-the-top, bombastic physics, where smashing into your friends is totally encouraged. If you get bored of the racing, there are a number of mini-games that you may get a kick out of, including beer pong and billiards. If you’re looking for something a little, shall we say, “different,” then check out Flatout 4.

Trackmania Turbo is a fast-paced arcade stunt racer where you can expect to be performing devilish jumps and riding around many a loop-de-loop. It’s a fun racing game that is certain to get a few laughs when you bang out the local multiplayer split-screen at a party. The leaps of faith at high speeds can get a little intense, though – this one isn’t for the faint of heart.

Redout sits comfortably in the green on Metacritic with a score of 81. It’s a futuristic high-speed racer that draws inspiration from Wipeout and F-Zero. And as such, it’s full of quick turns and daring jumps. It’s a great alternative to those aforementioned games if you’re looking for something similar, and it features both local and online multiplayer.

A majority of the games on this list use cars as their vehicle of choice. If you’re more of a two-wheeler person, Ride 4 has you covered. The choice of motorcycle and tracks are some of the best you can get in this entire industry, making it a definite choice for one of the best 2 player racing games around.

If you’ve been longing for an F-Zero game on a Nintendo console, then might I suggest quenching your thirst with Fast RMX for the time being. Fast RMX has a unique mechanic where you are constantly switching colors to activate different boost panels. It can be enjoyed in two-player split-screen and maintains a smooth 60 FPS when doing so.

Slightly Mad Studios has worked closely with car manufacturers and race car drivers to help create an accurate driving simulation game. This amounted to Project CARS 2 being one of the most realistic racing games of all time. This one is for true car enthusiasts, but still stands as a fun game for those just looking to have a sweet race with their friends.

The Crew 2 features a persistent open world that allows a friend to hop into your world to compete in races and other challenges. This game puts a heavy emphasis on being able to connect with friends to play through the game’s many missions, so you’ll definitely want to bring a buddy along for this ride.

R.C. Pro-Am II is one of the NES games featured on the behemoth of a collection that is Rare Replay. Here we have some classic top-down arcade racing goodness. It plays and controls similar to the old Micro Machines games, but includes weapons and upgrades for your R.C. car. This is a fun one that Rare Replay owners may have glanced over.

In this physics-based game, it’s your job to navigate your motorcycle through a number of obstacles. It can get pretty crazy, and a bit hard, so you can imagine how intensely fun it can get when you’re competing against a friend. That’s why this had to make our list of the best 2 player racing games you can play right now.

Another option for fans of sim racing games. Assetto Corsa strives to offer the most realistic driving experience possible, going so far as to recreate tire simulation on race tracks through laser-scanning technology. And it, of course, features an online multiplayer mode so that you can experience the realism with a friend.

The latest game in the long-running Gran Turismo series. It stands up there with Forza Motorsport 7 as one of the best-looking racing games of all time. Once you’ve achieved your best score on the daily race, you could always jump into a private lobby and have a race or two with a mate. Despite most of the game requiring an online connection, there is an offline arcade mode that can be played in split-screen. It was no question to include this as one of the best 2 player racing games around.

Circuit Superstars is, essentially, a much more modern version of R.C Pro-Am. It features multiple different kinds of vehicles from different motorsports along with pit stop strategies, seven tracks with alternate routes, customization, and more. And, of course, you can race locally or online with up to 11 other players.

Gran Turismo 7 sees the series return to its roots in a number of ways. Not only do we have the classic story mode, but it’s all decked out with some of the best visuals available on PS5 right now, some excellent challenges where you’ll earn your Licenses, and a plethora of different cars to hop behind the wheel of.

While unlocking some of the best cars can feel like a serious grind, the gameplay here is still as good as it ever was. Gran Turismo 7 is up there as one of the best racing sim experiences you can buy, and it’s all the better when you take on a friend in split-screen or online multiplayer.