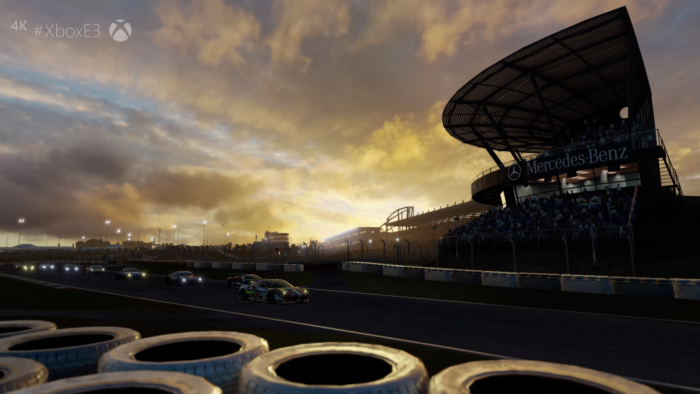 Forza Motorsport 7 on Xbox One

The Laguna Seca raceway has never been kind to me. Something about its tight turn as you descend down the other side of its steep climb always leads to me dropping a couple precious hundreds of a second. So you can imagine my despair when the rain started pouring down as I tried to guide a nimble Jaguar F-Type around my nemesis track. This was just one of a handful of memorable moments Forza Motorsport 7 has already given me, and I’m sure there are still plenty more to come.

The foundations of the Forza Motorsport series remain unchanged here. You’ve got a massive roster of cars, a list of iconic racing locations, and some great racing simulation gameplay bringing it all together. Most of your time in the game’s single-player options will be spent in the Forza Driver’s Cup. Here, a variety of events are divided into six different championships, each requiring you to reach a certain number of points in order to unlock and advance onto the next. The events on offer really do pick and choose from car types and special requirements to provide a fresh and interesting assortment. One moment you’ll be speeding around in an old school Ferrari, next you’ll be feeling the power of the latest hot hatches. Oh, and you’ll also be racing massive trucks, too. Each one, of course, will see you facing off against Forza Motorsport 7’s Drivatar racers who emulate other players’ racing styles, providing realistic, challenging, and varied competition.

Though you’re free to pick and choose from these events as you see fit, it’s certainly worth expanding your horizons and checking out a series or two you wouldn’t normally try. The folks over at Turn 10 Studios have clearly spent a ton of time on every single car in the game. Not just in terms of its visuals, but in the unique way each one handles, too.

Handling feels tight in cars. At least it does when it should be. The likes of the aforementioned Jaguar F-Type, a modern-day great, feels glued to the track as you dart around corners with an unparalleled level of control. Hop into an American muscle car, however, and you’ll find the heavy handling accurate to the real deal, leading you to change up your driving style in order to make up for its lack of nimbleness.

That’s where Forza Motorsport 7’s dynamic weather shakes things up, though. Thought you knew how to handle your favorite car? Think again. With a range of rain effects, that car you thought you knew so well becomes an entirely different animal. To stick with the same example, my F-Type struggled to keep its back end in coming out of tight corners in the wet as I floored the throttle. Something it had managed to keep neat and tidy somewhat effortlessly in the dry. During one race, the rain began to pour as the race progressed, leading to huge pools of water forming on the track. After flying through one of these, the rumble of the controller and sudden loss of stability in my car perfectly emulated that horrible feeling you get when you do this at high-speed in real-life. Weather isn’t just some pretty visual effect in Forza Motorsport 7, it affects the gameplay and makes each race an unpredictable blast around the track.

I can’t move on from the weather effects without talking about how great they look, though. Skies have clearly been a focal point for Turn 10 Studios and quickly became one of my favorite parts of the stunning environments. As I tackled the tight turns of the Rio track, ascending up into the mountains, patches of mist hung in place, others cascading over the course. Raindrops streak down the side of your vehicle and the camera will fall victim to the spray from your tires.

It’s not just the way the cars handle that Turn 10 has clearly put a lot of time into, though. Don’t touch your controller for a minute or so while in the menus and you’ll soon be treated to the result of what I can only imagine is hundreds of hours of painstaking car model detailing. But oh boy what an end result it is. From the way the chassis glistens realistically, reflecting the light, to the way you can pick out single rivets or the grain of the leather on the steering wheel. These cars are the very best models I’ve seen in a video game so far. This isn’t something the Forza series has by any means been struggling with, but it’s certainly not slacking in Motorsport 7.

Of course, if you don’t like the way your car looks straight from the manufacturer, Forza Motorsport 7 features the body kits from Forza Horizon 3 that went down so well with fans. You can now completely mix up the looks of cars should they not be to your liking, as well as tweak the tuning, pick up a fresh lick of paint (or one of the designs from the community), and upgrade its performance with new parts. Customization is there for those who want it, but you’ll never feel penalized if you’d rather just head out onto the track and race.

Customization also sneaks into the experience with the return of Forza Motorsport 6’s Mod system. These mod cards will alter the assists of your car or task you with completing a certain number of maneuvers (such as a Perfect Pass) in return for enhanced rewards. Depending on the rarity, some may simply enhance your winnings regardless of your performance. As such, on their own mods are a welcome returning feature. They do come with their caveats, though, but more on that in a second.

Despite all of my love for Forza Motorsport 7 when racing on the track or while admiring its stunning visuals, there are some disappointing niggles that really detract from the experience. Load times are a serious problem here. Every time you load up a race you’re looking at a short load time of about 5-10 seconds as it brings up the pre-race menu. This is then followed by another 30-40 seconds of loading before you can actually get to racing. Add on top of that some fairly clunky menus in the post-race rewards section and the moments surrounding each race feel too dragged out. Turn 10 is clearly pushing the original Xbox One (and the One S) to its limits with Forza Motorsport 7, so it’s understandable why it takes so long. Whether or not this will be improved upon when playing on the Xbox One X next month remains to be seen, however.

On top of the frustrating load times is the introduction of Prize Crates – an unfortunate instance of shoehorning in the worrisome trend of loot crates into single-player experiences. Prize Crates just didn’t grab me at all. Sure, I wanted the mods or driver gear they may contain, but I don’t want to go through the tedium of splashing out my hard-earned Credits in the hopes that I get the one I want. Mods could just as easily be rewards for races or even completing other mods. Driver gear could just be something I purchase, giving me freedom to customize my character how I want, not what the RNG allows me. It’s not enough to detract from the on-track experience by any means, but I hope they’re done away with for the next iteration. At least they don’t require any of your actual money, anyway.

Forza Motorsport 7 feels like the racing sim that embraces modern day technology. Its AI assumes the persona and driving styles of other players thanks to the power of the cloud. Its visuals are nothing short of breathtaking, there’s over 700 cars in the roster and an abundance of game modes to ensure the disc remains spinning in your disc tray for months on end. Unfortunately, it also highlights a lot of the niggles with modern day gaming. A hefty update needs to be installed before you play, load times are lengthy and all too frequent, and loot crates have riddled their way into Turn 10’s latest title. Despite these shortcomings, though, Forza Motorsport 7 is an incredibly polished and satisfying racer to get behind the wheel of.