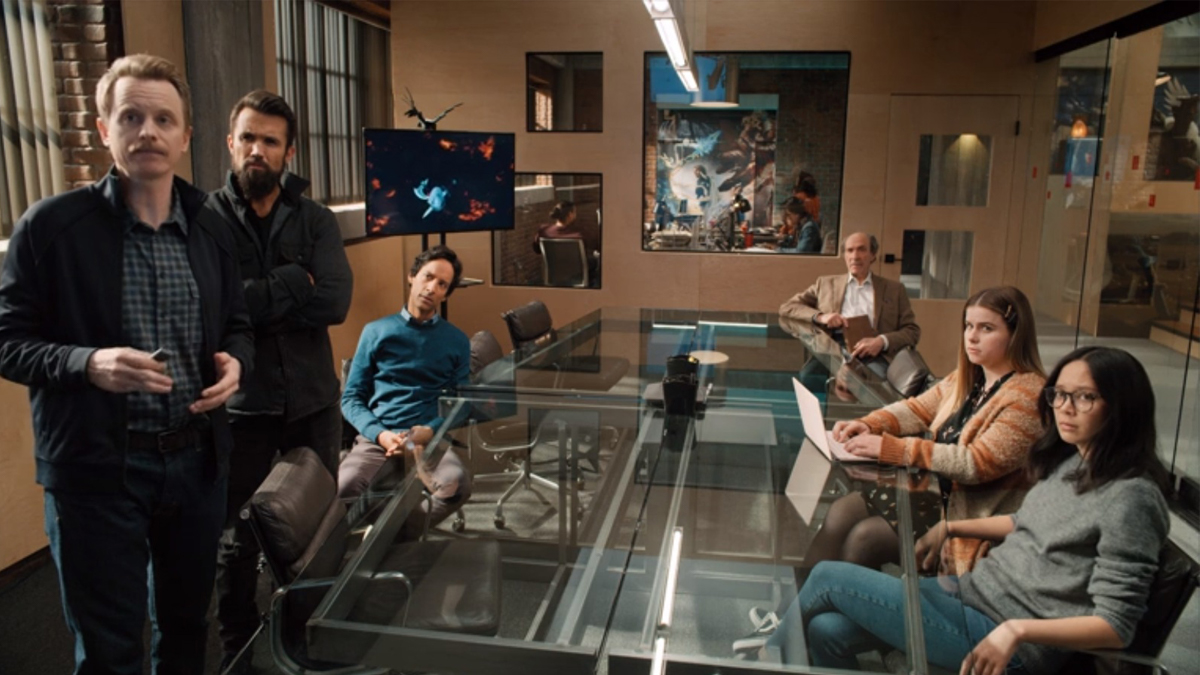 After a long time, Apple announced last month that Mythic Quest was renewed for a third, and fourth season. Since then, everybody has been waiting for the show to come back. The third season will finally be released on Friday, Nov. 11, with new adventures for Ian (Rob McElhenney), Poppy (Charlotte Nicdao), and the rest of the team.

Mythic Quest started as another workplace sitcom. The difference was this one wasn’t about a paper company or cops but the people creating a massive multiplayer online role-playing game (MMORPG).

The second season improved in everything the show had hinted at in its first year, creating a tv series that was both funny and emotional. One where every character had incredible chemistry with each other, so every scene had all kinds of unique, funny combinations to play with.

“TBD,” the last episode of season two, was very open-ended and left us with many questions to answer in this new season. Here are the 6 questions we have going into Mythic Quest season 3:

How Is Ian and Poppy’s New Game Doing?

The second season ended when Ian and Poppy had just decided to leave Mythic Quest to form their own company. One where they could create Hera, Poppy’s game idea she had during the second season.

With the help of writer C.W. (F. Murray Abraham), Ian and Poppy realized that for Hera to work, it couldn’t be an expansion to Mythic Quest. It had to be something new, as the architecture for the new game was too different from the one they were using for Mythic Quest. That’s why they left their jobs as co-creative directors of the game and said goodbye to the office and co-workers they’ve had since the show’s beginning.

In the new season, we’ll meet them one year later in their newly formed GrimPop Studios. Although they’re a small studio, they’re probably going to be an underdog competing with Mythic Quest.

It will be nice to see Ian and Poppy showing their inventiveness and creativity now that they don’t have all the resources a million-dollar game used to get them. Either they end up being bought by Mythic Quest, or they become an overnight sensation killing their old company forever.

Is Mythic Quest a Success With David At the Helm?

David (David Hornsby) had always been the game’s executive producer and (in theory) boss, but nobody respected him. At the end of season two, when much of his team left, he looked a little bit lost. He still had the newfound support of his power-hungry assistant Jo (Jessie Ennis), who looked like she finally liked David, and HR’s Carol (Naomi Ekperigin), but that was it.

Without his co-creative directors and no abilities as a creative or a programmer, it will be interesting to see how David keeps Mythic Quest afloat. He might even become a real leader, with input, and budgets under control, making the whole company work better as Ian and Poppy were used to thrive in the chaos creating as many problems as solutions.

David is less creative, but he might still have the recipe for keeping Mythic Quest as the number one MMORPG game in the market and squashing the competition. Even if those are his old friends.

Will Dana and Rachel Survive a Long-distance Relationship?

Dana (Imani Hakim) and Rachel (Ashly Burch) started the show as testers who used to play the game and have crushes on each other. During the second season, they started dating and deciding what they wanted for their future: Dana wanted to be a programmer, and Rachel a creative writer. They both applied to Berkeley, but only Rachel got in.

This new season finds Dana working at Ian and Poppy’s company while Rachel is studying Creative Writing in another city. Their courtship is one of the most tender and loving things in the whole show, and it must be protected at all costs. If someone is going to make a long-distance relationship work, is these two?

Being in love and keep growing professionally will be best for Dana and Rachel. Maybe someday they can create their own gaming company, as a programmer and a writer are all you need to get started.

Why Is Brad Back at Mythic Quest?

Brad (Danny Pudi), the studio head of monetization, ended the season being arrested for inside trading he didn’t commit. Brad’s brother Zach (Parvesh Cheena) tricked Jo into doing the crime, but Brad decided to take the fall as the punishment would only be six to eight months in a white-collar prison, and it would give him “street cred.”

In the trailers for season three, Brad is back at Mythic Quest as a janitor, but knowing he’s usually up to some kind of nefarious stuff, is easy to think he plans to do a lot more than moping the floor. Either he’s going to get back to his old tricks and end the season as the new Mythic Quest boss, or he’s going to destroy the company from the inside and become an ally to Ian and Poppy. Knowing Brad, both could be true, but whichever it is, he’ll create the maximum chaos to get there.

Is There More C.W. Story to Tell?

C.W. Longbottom was always the mark for an easy joke about some passed his glory writer who always said inappropriate things. In Mythic Quest’s second season, we got two episodes dedicated to this unique character: “Backstory” and “Peter.” Both were sad, lovely stories that told us a lot more about him.

“Backstory” was a deep dive into the ugliest part of the writer’s soul, where we met a young C.W. (played by Silicon Valley’s Josh Valley) as he befriended Peter Cromwell (Michael Cassidy) and A.E. Goldsmith (Shelley Hennig). “Peter” happened in the present, when C.W. and Peter (greatly played by William Hurt, RIP) met again after many years, and both acknowledged their past misdeeds while remembering the woman they both loved.

The Mythic Quest writers must’ve felt C.W.’s story had been told. Although he’s the one who gives the idea for Ian and Poppy to start a new project, he’s not in the new season. One of the funniest running gags on season two was C.W. working from home for health reasons, so they might use the avoiding getting sick as an excuse for his leaving.

The most probable situation, though, is that after he resolved his issues with Peter, he’s decided to finally end his science-fiction trilogy books after delaying it for decades. That would be more than enough reason for C.W. to leave Mythic Quest.

Who Is Joe Manganiello Playing in Mythic Quest Season 3?

The biggest Mythic Quest new character addition is Joe Manganiello, who will be playing himself. One of the new season’s biggest stories will be about a Mythic Quest movie, and Manganiello is going to be playing the “Hollywood’s version” of Ian. Expect a lot of jokes about Hollywood and how the industry really works while also getting many instances of Ian feeling emasculated (a note Rob McElhenny plays incredibly well) by Manganiello’s success, body, and personality.

Manganiello is a renowned geek who loves Dungeons and Dragons and video games. He also knows how to make fun of himself, so it looks like the perfect addition to this already great cast.

Now that we’ve answered the 6 questions we have going into Mythic Quest season 3, you can look for more Mythic Quest content in Twinfinite. While waiting for the new season to start, you can watch the Mythic Quest’s season 3 trailer and find out which are the top 5 best Apple TV+ shows of 2022 so far.