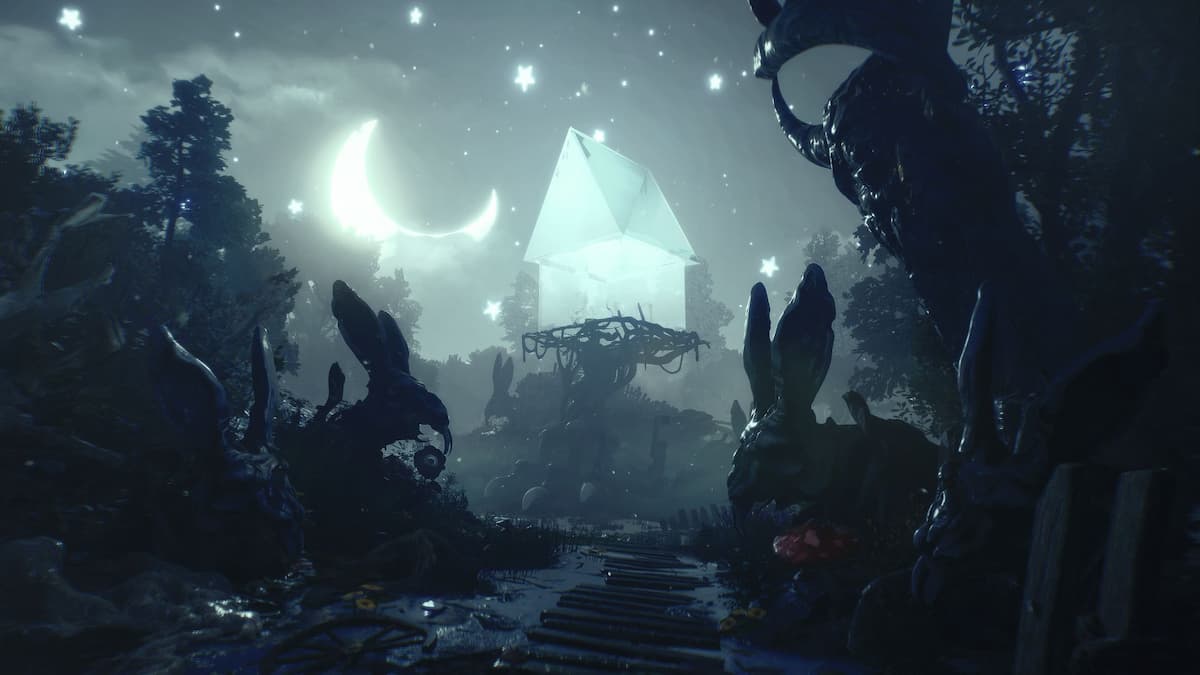 Blacktail is a unique story-focused game based on the Slavic folktale of Baba Yaga. You play Yaga, whose sister Zora has gone missing, along with several other children from the village. Yaga wears a mask and is bullied relentlessly by the town’s people now that Zora’s gone, and nightmares plague her.

Blacktail begins in the middle of one of those nightmares. You wake up in a dream, grab Yaga’s bow, and look for Zora. Suddenly, a voice begins taunting you, leading you deeper and deeper into the woods. The voice demands you choose whether you’ll follow the path of light or carve your way through the dark path – the first of many important choices you’ll make throughout the game.

Finally, the voice commands you to find the Hut, and Yaga wakes up from the nightmare. You set off to find Zora, but soon enough, you hear the voice again and stumble on the invisible hut from your nightmare. And so begins the dark folktale adventure of Blacktail.

Baba Yaga – Witch of the Woods

Baba Yaga is a mythical figure from Slavic folklore who’s sort of a trickster fairy godmother figure. She’s said to live in a turning, chicken-legged hut in the woods. Many folktales tell of Baba Yaga kidnapping children from local villages and eating them, but she also often helps people who happen upon her hut.

Blacktail is true to this legend. Yaga says some of her friends from the village, and possibly her sister, Zora, were kidnapped by Baba. But the sinister voice that leads Yaga to the hut and follows her through the woods – presumably Baba – is helpful, if mocking.

For example, when Yaga puts a red flower in a vase under a beehive to get honey the nice way, the voice reminds her that she could always just shoot the beehive down instead. She’s a chaotic neutral godmother at best.

Every choice you make in Blacktail impacts your morality orientation. Using a flower to get honey increases your Grand (positive) orientation, for example, while shooting down the hive would move you towards the Cursed (negative) orientation.

Other morality choices you can make throughout the game include helping or killing woodland creatures, killing bugs or sparing them, and helping or hindering good and bad characters. For example, an evil ant asks you to point her toward the village so her army can overrun it. Helping her moves your orientation towards Cursed, and refusing moves it toward Grand.

The orientation isn’t just hypothetical; it significantly impacts how you play the game. I followed the light (Grand) path, and my early choices strengthened that orientation. When the mushrooms Slippery Jack (Cursed) and Borvy Borko (Grand) gave me a choice of allies to seek out for help, the game chose for me – Grand.

Throughout Blacktail, you can choose whether you want to be the helpful fairy godmother Baba Yaga or the sinister trickster villain.

The Hut is one of the most important places in all of Blacktail. Yaga says she’s seen it in her nightmares, and the sinister voice tells her to go there from the beginning. Inside the Hut is a cauldron where Yaga can brew special potions from alchemical ingredients to learn new skills and abilities.

Some increase the number of resources Yaga can carry, while others give her helpful combat spells. But gathering the resources required to gain even one skill is challenging. Most skills are locked until you’ve learned their foundation skills, which you must also unlock.

And the ones that aren’t locked require multiple hard-to-find items like teeth, which you can only find in hidden chests scattered in the forest. It took me several hours to gain two new skills, and it’s almost impossible to make any progress in the game without them.

There are two game modes to choose from in Blacktail – Adventure Mode and Story Mode. The menu says Adventure Mode is the way Blacktail is meant to be played, so I chose that option first. I’m not exactly the most savvy action game player, so I expected to be challenged. At first, I was pleasantly surprised – dashing over harmless slugs was easy enough, and I took out the first couple of beasts with Yaga’s bow and arrow just fine.

But the game quickly became very difficult. Yaga’s health comprises three hearts, but low-level beasts like Will’O’Wasps do more than one full heart’s worth of damage. When I reached Rebel, the first boss-type character I encountered, I couldn’t even survive long enough to make a dent in his health because each one of his hits took out two full hearts.

After several attempts to defeat Rebel and an hour of trying to improve my skills (and a break to cool my frustrations), I decided to give Story Mode a go. It’s less difficult, but it’s no walk in the park. The beasts do a bit less damage, so it takes two or three hits for most things to kill Yaga, there are more blue flowers to heal yourself with, and they give you more health than in Adventure Mode.

But I still didn’t defeat Rebel on my first attempt, even with a lot of practice on Adventure Mode and buffing myself up before battle. I was mistaken if I thought Blacktail would be an easy story-centered adventure. The combat in this game is legit. The tools you have at your disposal at the start of the game are super limited – eight arrows and one or two lightweight spells – and the beasts mean business, whichever mode you play.

The art in Blacktail is absolutely stunning, vibrant, and occasionally horrifying. The forest is richly colorful with bright green foliage, blue and red flowers, and glowing yellow Will’O’Wasps. On the other hand, the canyon is the opposite – dark, monochromatic grey, disorienting.

The evil ants, good larvae, talking mushrooms, and monster plants that ensnare birds for fun are straight out of a Tim Burton movie. And all the while, there’s the sinister voice encouraging you to turn toward the path of darkness. Blacktail is dark and twisty in the best ways.

The story of Blacktail is intriguing, and the art is beautiful. It’s a story-focused game that’s unlike any I’ve ever played, but the gameplay is surprisingly challenging, even in the easier Story Mode. The story will naturally draw mythology fans to it, but the combat difficulty may dissuade more casual gamers from continuing past the game’s early stages.

Even so, I put hours into the preview build of Blacktail and loved (almost) every minute of it. If you’re at all intrigued by the folklore concept and games with morality systems, you should definitely take a look at Blacktail. It’s scheduled for release on Dec. 15 on Steam for PC, PS5, and Xbox Series X|S.